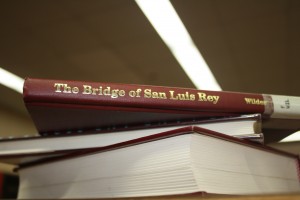 Writing is concerned with questions. Everything that follows from a pen, literary or otherwise, is written with the purpose of answering some query, of finding steady ground.

Sometimes, an answer is forthcoming, and the writer is able to find resolution to a question, and find the world a less unsteady place because of it. However, just as frequently, he finds no answer, and it is in this unfortunate shape of existence that the bulk of Thornton Wilder’s Pulitzer Prize winning novel, The Bridge of San Luis Rey, takes place and gives us an answer to the unanswerable through the simple, understated shrug of its shoulders.

At first glance, there doesn’t seem to be a better setting for Wilder’s novel. Placed, as if by divine literary intervention, among the misted mountains of Peru, the eponymous bridge of the novel is viewed as the “best bridge in Peru”, and when it falls, dragging five different characters with it, the whole country is devastated, save for Father Juniper.

A faithful man in an unfaithful world, he views the collapse of the bridge as a chance to scientifically prove the existence of God to the burgeoning, doubting masses of the nascent Baroque Era, as well as expurgate the nagging doubts of faith that plague him far too often for his professional comfort. Thus begins the novel, with the creation of another, and what follows is five chapters and five stories, all connected in some slight, negligible way, and bound together by the Father’s successively less viscous faith.

The characters, a woman of letters, a famous actress, two brothers and a mysterious hanger on, are all portraits of people battling with a world they recognize as cruel and hard, and the various ways they cope with this realization, through their search for love, is as disparate as they are interesting, and painful to read.

Wilder helps refine the novel and maintain the focus on the story itself by managing to make the novel immensely readable, ironically enough, and doesn’t make the mistake of subjecting the reader to an existential slog, instead opting for a simple portrait of a complex subject, leaving the reader to think and ponder for themselves, rather than thrusting an opinion at them.

This, by no means, implies the novel is shallow; it is an intricate and multifaceted book, liberally sprinkled with aphorisms and deft psychological portrayals that examines when life, literally and metaphorically, falls out from underneath us, but it still remains comprehensible to the average reader because it always remembers to tell a story, rather than moving in circles between musing and prose. Instead of opting for an opaque tome, as he might have, musty and choked with the dust of a great mind left to cannibalize itself in search of a fact while we spectate, it retains a clean, well rested air that helps the book retain its immense readability, and still remain eminently engaging.

The story moves forward, chronicling the failure of the Father to find a reason for the random deaths of five people, till failure after failure eventually causes him to resort to the wild and absurd, even assigning numerical judgments to vice and virtue, and amidst all this confusion, the novel seems to settle, even as the world it creates unravels, and ties it’s characters together, albeit with difficulty.

This is really the only blemish of the book; Wilder, in an effort to negligibly yet securely tie together the characters, in order to metaphorically show the fragile unity of mankind, strains to make them know one another, creating rather weak transitions between each chapter, rather than making each character self contained, and honing the emotional weight each carries. Still, it’s a minor matter of opinion, and the rest of the novel shines, brilliantly, till the very end.

The novel concludes in the holy confines of an abbey, a constant, knowingly wistful reminder of the goodness of mankind, as Wilder admits that life, as it is now and always will be, is absurd and attempting to discern a guiding hand, a thread through tattered cloth, is futile. Instead, as Wilder sees it, love, to have another human soul brush against yours, is the reason, the end, of living. It’s a simple answer to an unbelievably difficult question, and it is a testament to Wilder’s quiet assurance in the unassured that he can make us believe in absurdity, and then have us believe, again, in the profound.