Coppell to face Prosper in third round 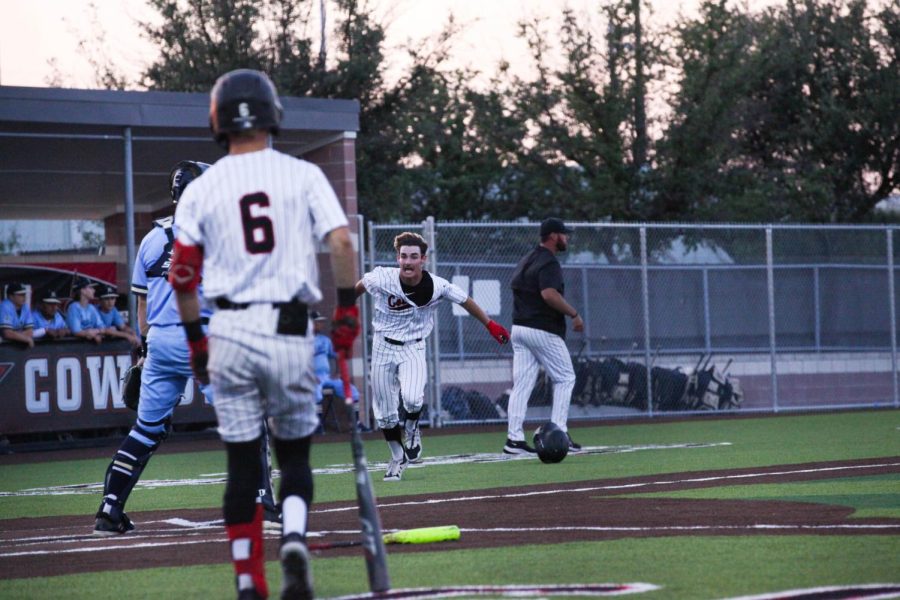 Coppell senior right fielder Will Boylan slides to score the second run in the bottom of the second against Dallas Jesuit on Thursday at Coppell ISD Baseball/Softball Complex in Game 1 of the Class 6A Region I area playoffs. The Cowboys defeated Jesuit, 5-2, in Game 1 and 4-1, in Game 2 of the playoff series on Friday in Dallas.

The Coppell baseball team has had a weight on their shoulders for the majority of the last month. Despite winning nine games in a row, the Cowboys have never really been able to find their offensive groove early on in games.

That weight was lifted off Coppell in the Class 6A Region I area  playoffs against Dallas Jesuit.

Coppell defeated Jesuit, 5-2, on Thursday at Coppell ISD Baseball/Softball Complex and defeated Jesuit, 4-1, in a Game 2 on Friday at Jesuit. In both games, it was an early offensive flurry that carried the Cowboys to victory.

The Cowboys (25-6-1) will face Prosper in the Class 6A regional quarterfinals next week. The Cowboys play the Eagles for Game 1 on Thursday at 7:30, Game 2 on Friday at 7:30 and Game 3, if needed, Saturday at 1 p.m. All games will be played at Little Elm.

“Getting started early makes the games more fun for me as a coach, being able to just watch our guys drive in runs instead of having to sit and try to manufacture runs every game,” Coppell coach Ryan Howard said. “Scoring early took a lot of weight off a lot of guys’ shoulders. It’s been mocking our backs all year long and we’ve been bad on it. To be able to do that in a big, playoff game sets the tone for us and our offensive approach throughout the series. It felt really good.”

Coppell senior catcher Walker Polk was the player of the series for Howard after he had to step in for injured senior catcher Bradley Castillo. In a combined six at-bats, Polk had four runs, three hits (including a solo-homer in Game 2), one RBI and walked in a highly productive offensive series.

“I can give that to four or five different people; [sophomore second baseman and shortstop] Michael Russell had a fantastic series, [senior right fielder, second baseman and reliever] Will Boylan had a fantastic series,” Howard said. “But, Polk stepping up in the spot that he was put in, playing the defensive that he played and then having the big swings he added, it’d be a tough argument to go with anybody else other than him. His senior leadership is unprecedented and we are really proud that he’s a Coppell Cowboy.”

Hot stars, elite pitching and astute defense has been Coppell’s desire all season long and the Cowboys have finally played a series where they were firing on all cylinders.

“It’s always fun when everything is click and you don’t have to worry about something but we’re always a really good team, even when we’re not hitting good,” Polk said, “It’s nice to see all the guys coming around and getting hot; this is the perfect time to do that.”

DALLAS- The Cowboys wanted to keep the early offensive momentum going from Game 1 and did just that when they traveled to Jesuit on Friday.

In the third, Polk, down 0-2 in the count, battled back and barreled a fly ball to right field for a solo-homer. Polk has hit a homer in back-to-back playoff series for Coppell.

In the fourth, Boylan doubled on a line drive to left field and, with one out, Russell doubled on a hard ground ball to left field to score Boylan. Russell, who has gotten few, if any, at-bats all season long, earned his start after Polk was forced out of the infield and showed out with spectacular defensive plays and an RBI to cap off a strong series for the underclassmen.

“I was a little nervous when I found out that I was going to start this series but, after a few innings, the game slowed down a little bit,” Russell said. “Once you get your first play out of the way, it is go time from there.”

Junior pitcher TJ Pompey earned the win, lasting six innings, surrendering seven hits, one runs, and striking out five. Boylan came on and threw 14 pitches in relief, inducing a fly out and a pair of groundouts to end the series.

Of Coppell’s six hits, Polk and Boylan each had a pair of hits while Russell and Fee had one each. Tucker had three of Jesuit’s seven hits.

“[Last night] wasn’t bad, I played decently,” Pompey said. “Jesuit is a good hitting team and I knew I had to throw my strikes and let my defense work. My defense had a heckofa game [last night].”

The Cowboys have been hoping for a strong offensive showing from the early innings of a game all season long and, on Thursday, early hot bats came at just the right time for the Cowboys.

Coppell exploded for a five-hit, three-run bottom of the second to take claim of Game 1 in the Class 6A Region I area playoffs against Dallas Jesuit.

“We just started in our groove,” Pompey said. “It helps when we get batting practice on the field to get us ready and our swings warm. Not swinging when we didn’t need to, staying confident and getting runs in helped us tonight. The way we kept practicing, our hits were eventually going to fall and tonight they did so it was fun.”

“We’ve struggled all year with scoring and it’s good to see us coming around and being able to score early in games, that’ll open up the whole game so we can play more confidently,”Polk said.

The Rangers didn’t back down, however. In the third, Jesuit reached second on an error by Schultz and Tucker doubled on a fly ball to center field to score the runner, cutting the deficit to two runs.

In the bottom of the third, Polk reached first on an error and, after stealing second, he reached third by tagging up on Fee’s fly out to center field. Sever singled on a line drive to right field, scoring Polk and restoring the three-run lead for the Cowboys.

“If we could score like that in every single game then it takes so much pressure off of the pitchers especially and off of everyone else,” Sever said.

In the fourth, senior first baseman Tommy Delaney singled on a hard ground ball to center field and sophomore courtesy runner, in for Delaney, was scored by senior catcher David Long’s single on a line drive to center field.

In the fifth, the Cowboys restored their three-run lead. Polk doubled on a line drive to left field and Fee reached first on a Jesuit fielding error. With one out, Boylan was out on a sacrifice fly to left field but Polk scored.

“Everyone with eyes saw that I didn’t have my A stuff tonight but it was just about working with what I had and getting the win,” Boylan said.

The Cowboys scattered seven hits with Pompey, Sever, Boylan, Schultz and Russell all having RBIs.

“It was nice to see us break out early and put some runs on the board early,” Coppell coach Ryan Howard said. “To see any lead, especially an early lead, instead of having to go into the sixth or seventh inning in a one-run ball game is nice.”