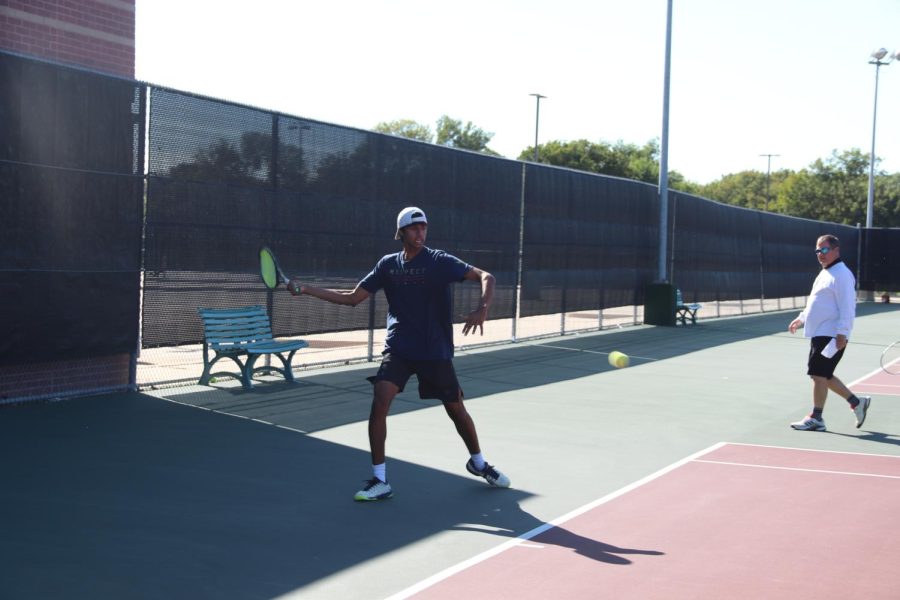 The racket makes a firm thump as the ball smashes against it and flies to the other side of the court. Back and forth, the ball continues to bypass these strong forces, until one misses and gravity takes charge.

The satisfaction of these hard shots are familiar to the hands of Coppell senior Vinay Patel and junior Lindsay Patton.

Patton and Patel have been playing tennis together for three years. As a mixed-doubles team, they feel very satisfied to have reached their goal of playing state together.

“It was surreal at the same time, we always had [Coppell coach] coach Rich Foster there,” Patel said. “We could always talk to him if we needed something, he was always there for us. It was nice to be able to return the favor by going to state and finishing out the season strong, especially for his last year.”

Patton and Patel qualified for the first time to the Class 6A State Tennis tournament on April 26 at the Northside Tennis Center in San Antonio.

“I was excited,” Patton said. “Us doing well in the playoffs, it extended [Foster’s] time coaching us and made the season longer.”

Patel and Patton finished third in Class 6A mixed doubles after advancing to the semifinals, where they lost [score and opponent]. Both players had always dreamed of reaching state as partners, finally achieving that in Patel’s last year.

“We balance each other out,” Patton said. “Because of our dynamic, we work together really well together bouncing ideas out on how we can win the next play and really get tactical and strategize. We can really talk to each other.”

Patel also thinks their bond over time was a key advantage in their achievements. By playing the game together for a long time, both players have developed a close friendship that helped them understand each other’s strengths and weaknesses. It was this advantage that helped them

“Lindsay and I have been playing together for a long time and since [Coppell Middle School East] we’ve known each other,” Patel said. “We got really close last year and we just decided that my senior year we would play together and we went undefeated for six tournaments, and that’s when we knew that we had a real shot of making it to the playoffs and we worked hard and I’m glad it all paid off.”

Foster thinks the advance to state was expected as Patton and Patel were more than prepared.