Lariettes go beyond dancing at the Spring Show 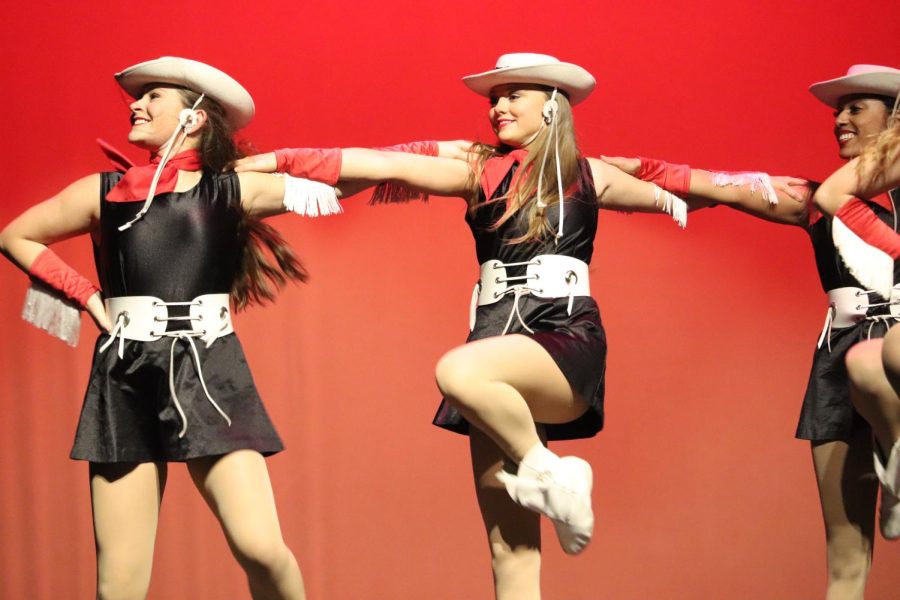 Coppell Lariettes junior Ava Williams and sophomore Grace Minteer dance during the finale of the Lariettes’ 2022 Spring Show on Friday in the CHS Auditorium. The Lariettes’ show centered around popular movies from the past century with dances inspired by genres of films.

The Lariette Spring Show on Friday night in the CHS Auditorium recreated dances based on popular movies such as The Avengers by Joss Whedon and The Hunger Games by Gary Ross.

The theme of movies, chosen by Lariette director Hayley Micthell allowed the drill team to expand their horizon of dancing with various types of dance other than regular drill theme.

“The strengths of this spring show are being able to see different genres of dance. We’ve got hip hop, jazz and contemporary, “ Mitchell said. “I think that helps the flow of the show and it gives you something different as you’re watching it from beginning to end.”

Each officer had a squad, Lariette captain senior Elaina Hair’s squad was contemporary.

“My squad dance, ‘This Bitter Earth,’ was something completely different than most of these girls and I have never done before,” Hair said. “It allowed us to step outside of our boundaries and it was something that I choreographed that I think pushed all of us as dancers.”

“We needed fillers, which is where the officers came in and choreographed their squad routines so we could get different styles into the show,” Mitchell said. “[It’s also to] give them a chance to show what they’ve got as an officer, dancer and choreographer.”

Sixteen performances of solos, squad dances and officers were performed by the Larietes, two of which were performed by Silver Stars, “Turning the Pages” and “Another Bites the Dust,” both choreographed by Clark. However, the CHS Band was unable to perform due to sheet music not arriving on time.

The show had some technical difficulties before the Lariettes performed “Avengers Mix,” choreographed by Kelly Ruth and based on The Avengers by Joss Whedon. Due to this, intermission was called abruptly before the scheduled time.

“Tonight’s show we had a couple bumps in the road, but I’m ready for that perfect performance and I know that the girls are going to do a great job,” Mitchell said. “This is why we do three shows so we get better every single night.”

Each performance contained excitement from the audience that reflected the Lariettes.

“It was like everyone was just excited to see the next dance and what we came up with next,” Lariette  sophomore Reagan Walker said. “It was thrilling.”

The audience participation and reaction led to a major contribution to the Lariettes’ performance.

“I love when the audience really gets into the dancing and what’s going on on stage, I think that really amplifies the dancers and it just really enhances their movement,” Mitchell. “It gets them excited and helps them project more and it makes their energy go up.”

Mitchell wanted to showcase the entire team, so solos were given to senior officers only.

The Lariettes also performed “Pre Madonna,” choreographed by Hair and Landefeld to honor the strong-willed women representation in films.

“It feels rewarding to see your creation come to life on the stage,” Hair said. “These girls have done such an amazing job taking what I envisioned and making it possible.”

The show also included elements outside of the stage as in the performance “Pirates of the Caribbean,” choreographed by Landefeld and based on Walt Disney’s films series Pirates of the Caribbean, dancers in the beginning of the performance came through the doors of the auditorium and acted as pirates. There were also fog machines and a surprise in the “Finale” with a sparkling red Lariettes sign dropping down.

“It’s exciting having this big finale,  it’s so fun and the vibe is so amazing,” Walker said. “I’m so happy to be performing the spring show with this team for the last time.”