Please don’t tell me to calm down 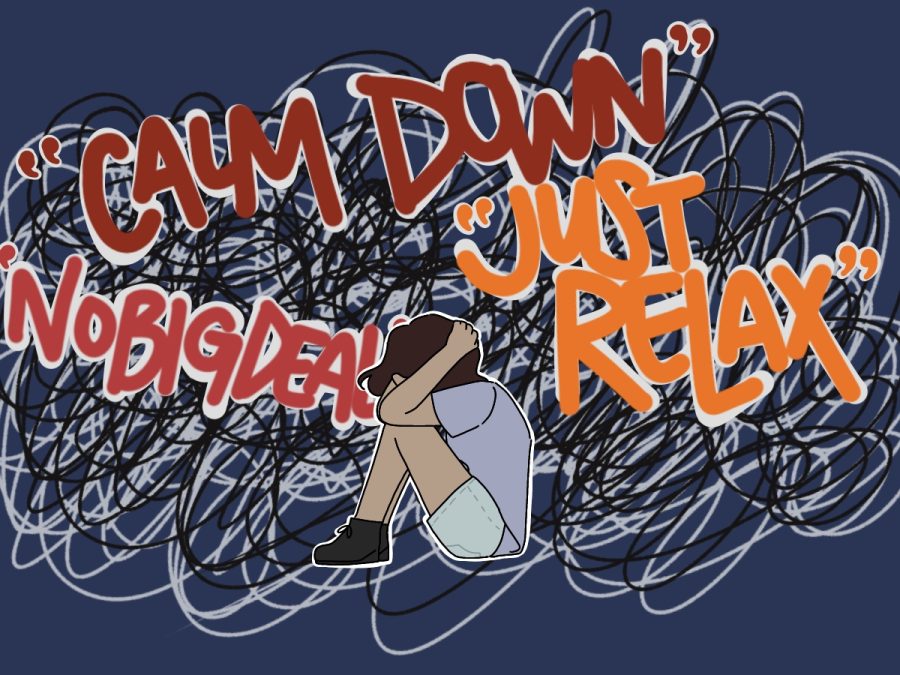 Anxiety disorders are often generalized simply as stress, when the two are actually very different from each other. The Sidekick advertising/communications manager Manasa Mohan explains why people shouldn’t lean into the stigma surrounding mental health disorders and how harmful it can be to those with them.

These are normal feelings that most people experience throughout their life. But for me, those feelings don’t occur every once in a while.

Ironically, those feelings sometimes feel as though they are the only constant in my life.

I was diagnosed with anxiety in eighth grade, but have experienced symptoms for as long as I can remember. When I was in fourth grade, 30 minutes before my weekly dance class, I was terrified to go. The worst part was, I loved dance and I always had. That class had always felt like my safe haven, my retreat. But all of a sudden, it felt like I was about to enter my worst nightmare. In fifth grade, I had a panic attack at one of my extracurricular classes because I had too much to do in one hour, and my brain simply got too overwhelmed for my body.

In sixth grade, I advanced to the second round of my school spelling bee. That morning, I was terrified of spelling a word wrong in front of everybody. In seventh grade, I grew too aware of what others were thinking of me. The solution? Stay in my own friend circle. My brain convinced my body that everyone outside of the friends I had known for years would judge me for the smallest things. So, I closed myself off.

Most people can shake those feelings off relatively quickly. They are usually classified as stress or worry. But I always knew something was different about me because for some reason, no one around me or myself could shake the feeling of terror that overwhelmed my body. I felt like I was trapped in this eternal fear that was never going to leave me, which made me all the more horrified. These instances were few and far between, but when they did happen, people noticed. I felt like everyone in the world was staring at me and I hated it and thus, my journey with social anxiety began.

As I began high school, these attacks became more frequent and I couldn’t control them. There was nothing I could do to stop them. Sometimes they felt justified, but other times, I could not put my feelings into words when people asked what was wrong. Some attacks stemmed from a geometry test the next day over a unit I didn’t understand. Other times, because I was nervous to walk in the hallways due to fear of judgment.

The biggest problem I had was simply accepting that I had anxiety. I didn’t want to because of the stigma surrounding mental health, anxiety and getting help for mental illnesses. I was too scared that my anxiety would be generalized as stress. I was scared that people would not be able to understand why my body would just shut down.

But, unfortunately, the world has let the stigma win. In a survey done by the National Survey on Drug Use and Health, 12.6 percent of people said they did not receive care or treatment for their mental health due to the fear of their neighbors or community having a negative opinion and another 12 percent said they felt receiving care would have a negative impact on their job.

To me, the words “you need to calm down” are the epitome of the stigma. Trust me, I was trying to calm down. I was trying to get a grip on what was happening but I just couldn’t. My body would spin out of control and there was nothing anyone could say or do to stop that spiral. I understand that being around someone having an anxiety attack is difficult. It’s tough to figure out what the right thing to say in that moment would be. I’m not blaming anyone for telling me to calm down or to relax. I just want to voice what I couldn’t whilst experiencing my anxiety at its peak.

Eventually, I learned how to accept that I had anxiety and I began to learn how to help myself when others could not. Although I have had to accept that there are going to be difficult days for me in the future, in an unusual way, I’ve learned a lot about myself from my anxiety and I’m somewhat thankful for it. I learned that I have a type A personality and no one can change that about me. Anxiety has taught me how to find balance in my life. I learned how to put myself first. But the most important thing that my anxiety has forced me to understand is that it’s OK to not be OK.

I’m done hiding my anxiety. I have no reason to. The need to hide an essential part of who I am that I have dealt with all of my life is pointless. I am angry that I realized so late in my teenage years that I shouldn’t have to hide it.

To those people, this is for you. I’m sorry the world has leaned into the stigma and could have forced you to remain quiet about your struggles and I hope you never have to hear the phrase “just calm down” again.