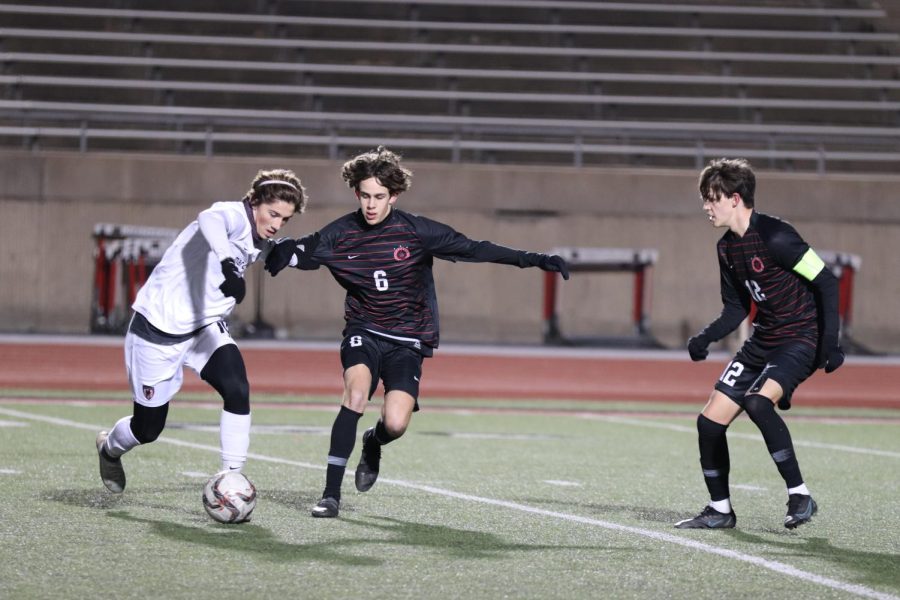 Five minutes into the Coppell boys soccer team’s match against Flower Mound Marcus at Buddy Echols Field, Coppell junior midfielder Preston Taylor put away the goal that would set the tone for the rest of the night.

“That first goal started a domino effect,” Taylor said. “It set us in a forward direction.”

With two more goals, one from senior midfielder Pedro Peréz-Pareja and the other from senior forward Marco Lopez, the Cowboys cruised to a critical 3-0 District 6-6A victory.

“To beat a rival 3-0, it’s a big thing,” Coppell coach James Balcolm said. “I know they were banged up a little but so were we, so to come out, play our game, the boys got a lot of confidence tonight so hopefully this type of feeling, this momentum continues.

The Cowboys entered with only one win in District 6-6A play, which came Tuesday against Plano West. The Cowboys propelled that momentum into Friday’s win against Marcus.

“It’s just a mentality change,” Peréz-Pareja said. “We want this so bad. We know we started this season wrong and we want it so bad we’re not going to finish wrong.”

Although Taylor’s goal lifted the Cowboys’ spirits, demonstrating a continuation of their showing from the Plano West match, Peréz-Pareja’s score to close out the first half left Marcus reeling as they headed into halftime.

“We came in with so much energy, they were getting tired,” Peréz-Pareja said. “We were just the better team tonight.”

“Mastering this formation is what we’ll be practicing in the next couple of games; it’s the key to our win tonight,” Taylor said. “We’ve been going through a lot of different formations but this one’s a lot more comfortable and we’re probably best in this formation.”

With its second big win in a row, the playoff berth is in Coppell’s sights. Friday’s win brings the Cowboys to seventh place in district play, meaning by Balcolm’s estimation, Coppell needs two more wins to qualify for postseason.

“We took advantage of our opportunities,” Balcolm said. “Our guys are starting to realize that it comes down to grit and effort and they’re starting to show it this week.”