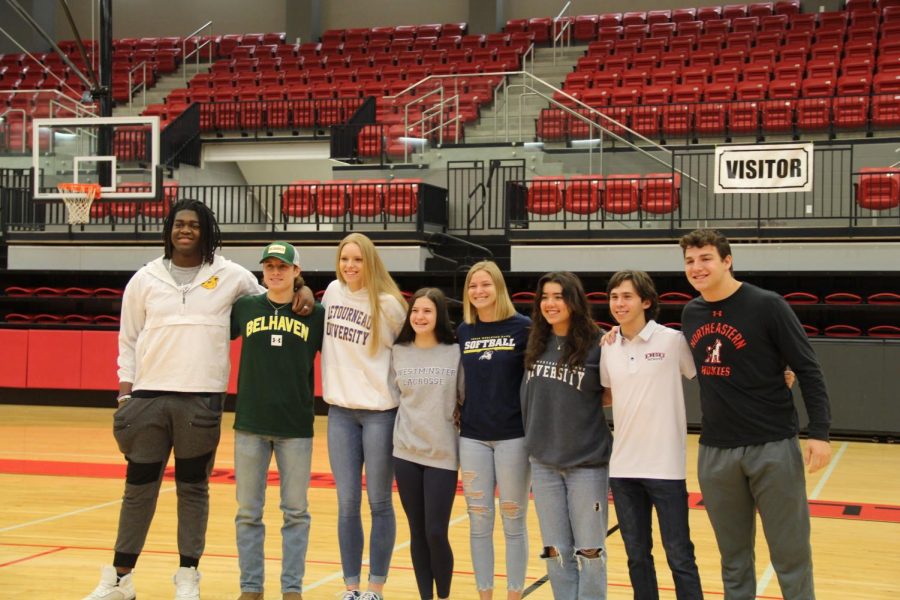 Wednesday morning featured a monumental moment for 8 eight Coppell High School athletes; signing their intent papers to their next step of their life, college. These senior athletes at the Nation Signing Day hosted in CHS Arena.

Parents, teachers, teammates, friends and middle school acquaintances attended the event Wednesday morning to congratulate the athletes for their commitment to continuing their sport through college.

“I think there’s a really good amount of support here for all these athletes and only about 5% of high school athletes [go] to play in college,” Head softball coach Ashley Minick said. “That’s a huge feat in itself.

Sandra Zimmerman is proud of her daughter, ElleBelle, who will play softball at Texas Wesleyan University. ElleBelle is a shortstop for the Cowgirls.

“I’m extremely impressed with her, she has just blossomed into a wonderful young woman and I couldn’t have asked for a better daughter, “ Zimmerman said. “She has that fire in her heart to play softball through Texas Wesleyan.”

Coppell ISD Athletic Director Kit Pehl congratulated the athletes for their accomplishments and thanked audience members for attending. Each athlete had a table on the arena floor decorated with their new school’s colors and logos.

“I definitely am so thankful to my coaches because they’ve gone me into so many tournaments where there’ve been multiple colleges there for me to show off to. I think that those big tournaments are super important and I’m so thankful for them,” ElleBelle Zimmerman said. “My plan is to just play college soccer and just figure it out from there. I’m so excited to actually just play though, [because] I’m so excited for the competition and playing with other teams that are much better than I am.”

Videos of the athlete thanking coaches for their hard work and celebrating their accomplishment played on the arena video board.Similar to the athletes, coaches gave their athletes a few words about their performance and wished them well for their future.

“We’re really excited to go ahead and make sure that these kids are continuing on with the sports that they love and they’re gonna be open to new experiences playing at that collegiate level,” Minick said.

“Starting playing football when I was younger and just working hard and having good coaches got me to where I am now,” Hardy said. “I’m excited for a new beginning, being in a new place and just making new memories; I’ll be majoring in coaching and leadership.”

“Discus has taught me a lot about persistence and when things don’t go right, you just have to keep practicing and getting better,” Sewall said. I’ve had a lot of bad throwing days that I have had to get through, but to get here you gotta put that all behind you and work hard. A lot of my hard work [accumulates]  into this one moment and it feels great; a big accomplishment for me. I’m going to major in bio and the thing I’m most excited about is living in Boston.”