Class ranks are just another number 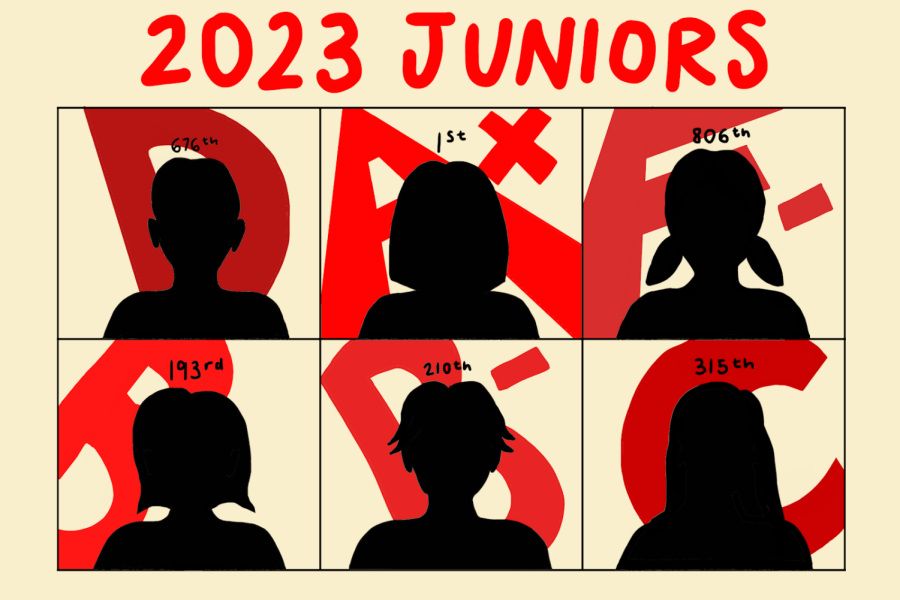 It is almost time. Class ranks are released for the class of 2023. The time most juniors anticipate with either excitement or fear.  Conversations about when class ranks come out, who will be ranked, how important ranks are and what GPA is necessary to be ranked fill the hallways more and more as the time for their release looms closer and closer.

“We are a very large, competitive, high-achieving high school,” Coppell High School lead counselor Ann Cinelli said. “It is hard for kids to look at class ranks and not think they’re not good enough. It creates this ‘comparing yourself to other people’ and this competition that is very unhealthy and it just perpetuates the problem.”

Considering CHS only ranks the top 10% of students with more than 900 students vying for the same 96 spots and the smallest difference in grades affecting GPA and ranks, the competition between students is bound to become cutthroat. After the wheels of competition begin to turn, there’s not much that can be done to stop it. Students are trapped in a perpetual cycle of trying to beat the student ranked above them. When that desire to beat someone else becomes obsessive, it leads to stress, anxiety and feelings of inadequacy.

However, the main appealing factor of being ranked is the prospect of automatic acceptance to Texas colleges if a student is ranked within their high school. Texas House Bill 588, otherwise known as the “Top 10 Percent Law” passed in 1997, offered automatic college admission for students ranked in the top ten percent of their high school class to all state-funded universities. In recent years, that percentage has been gradually lowered to six percent, namely for the University of Texas at Austin. In 2009, the law was uniquely modified (under Senate Bill 175) for this specific college and under the new law, the university was required to automatically admit enough students to fill up 75% of available Texas resident spaces.

In 2019, the college lowered the percent cutoff from seven percent to six percent to account for an increase in applications and it has remained the same ever since. Despite the increase in applications, the competition to be one of the 60 or less spots that receive the prized automatic admission into a prestigious school has become relentless. Regardless of the automatic acceptance being true for Texas schools, class ranks no longer hold as much significance as they did years ago.

In the fall of 2007, 23% of colleges attributed “considerable importance” to class ranks. However, in 2018 a survey of 220 colleges found that only 9.1% gave class rank considerable importance. Additionally, the College Board’s Annual Survey of Colleges, which collects information from nearly four thousand higher education institutions each year, asked what percentage of enrolled freshman submitted their class rank as a part of their application and the average share of students in public and private colleges who shared their rank dropped by about 10 points between 2007 and 2017. Highly selective colleges (those that accept no more than 25% of their applicants) and Ivy Plus schools recorded a 14 and 22 point drop, respectively, in the average share of students who shared their class rank over the same ten year time period.

Considering that class rank is affected by the rigor and level of difficulty of the classes that a student takes, oftentimes, students will take AP classes solely for a GPA boost rather than for their genuine interest in the material or curriculum of the class. This pressure to be ranked drives students away from the classes that they wish to take considering those classes may not be as valuable to their class rank and their transcript as a higher level AP or IB class.

Rather than allowing themselves to explore their own interests and discover their passions through the classes they take in high school, students use their classes and course registration as a vehicle for their GPA.

“You don’t need to be ranked at all,” Cinelli said. “We have students that go to amazing colleges who are not ranked and who are ranked. Colleges don’t care so much outside of the state of Texas about grades as much as they care about the other things. You could compare yourself to kids in Frisco, Plano, Southlake and Keller and you all take the same classes. You could probably find one person at that high school that has the exact same grades as you, so the other things that you do are way more important because so many people look exactly the same on that piece of paper. That’s where we need to shift our focus to, those things that we can do, either in school or outside of school because they make more of an impact.”

I understand that being ranked is a fantastic achievement for students and that should not be diminished. However, there is no point in a high school student’s career where they should be identifying themselves solely by their class rank. In order to prevent that mindset from being normalized, we need to stop letting our self-worth be defined by class ranks. It is imperative that we detach ourselves from ranks and learn that there is more to a college application than the one single number.