Pop music isn’t any more basic than your antiquated taste 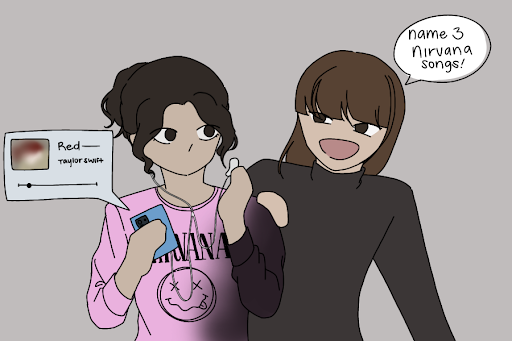 As listening to alternative and indie genres becomes more popular, pop music is increasingly labeled as basic. The Sidekick executive editor-in-chief Anjali Krishna argues that we should respect pop music as a taste.

The year is 1964. Beatlemania runs rampant. A Hard Day’s Night has just been released and Rubber Soul is well on its way.

The four band members have the same ugly haircut on the same shaggy brown hair. When wearing sunglasses, they’re nearly indistinguishable. Teenage girls climb the barrier at their shows and trespass into venues to catch a glimpse.

When the rest of the world didn’t see the magic in the Beatles, whose monolith fanbase today is largely comprised of older men, teenage girls did. The image of a crazed teenage girl at a Beatles concert was a joke, a critique of fan culture as early as the 1960s. Sixty years later, when the Beatles are revered as a musical game changer by a seemingly more important fanbase (men), the teenage girls of the current generation are spoken of the same way: tasteless and unappreciative of true music.

The pop music of today is called shallow, repetitive and trashy. It is an easy target. It has the Top 40 hits, the incessant radio play and the often terrifying stan culture behind its biggest stars. Yet from The Beach Boys’ Pet Sounds to Joni Mitchell’s Court and Spark to Drake’s Views, pop music has been influencing tastemakers in every genre since its beginnings. It is and has been revolutionary, and the obvious reason behind it attracting a popular dislike lies in this supposed spurt of counterculture.

Pop music is often a marker of change – what is at the top of the charts reflects the current popular culture. As anti-war movements revved up in the 1960s, Mitchell’s reflective folky sentiments mixed with pop sensibility held the number one spot. Elton John and Queen combined arena rock with mainstream pop. As techno and rave found its place, Michael Jackson and Prince refined pop with synths. The popularity of pop groups rose in the 90s, as media made them more accessible than ever.

Music has always served as an important part in defining personality, and even more so with the continual rise of valuing individualism in modern counterculture. It is very cool to have a unique music taste, to listen to and discover music that most of today’s generation isn’t interested in. But what isn’t so cool is disliking something for its popularity or thinking one’s own tastes are more mature or artistic. Disliking popular things is almost as linked with modern popular culture as popular things actually are.

Definitively calling pop music as a whole a shallow mechanism of music is ignorant for the fact that simply, it isn’t true. In every genre, there exists both lower and higher quality music. The music that is most definable as pop on the radio is not being played for its high lyrical quality or excellent production, they are played for being catchy. Comparing a song that is made to be fun and an earworm to music created with full artistic purpose will result in nothing but inaccurate comparison. Because these types of music are not looking to achieve the same goal, they cannot be judged by the same standards.

However, a similar common dismissal is applied to popular music that does carry deeper meanings. A peppy tune or catchy production doesn’t automatically disqualify music from being “deep” or artistically important. What’s fun can also be meaningful.

Pop music’s technical definition expands far past what most music fans think it is. Indie pop fans that think much of themselves for discovering smaller artists fail to recognize that outside of its do-it-yourself take to parts, the genre is derived entirely from typical pop. Even among more popular and traditional pop artists, the singles dominating radio play are far different from the rest of albums, with songs less curated for the wide audience.

It doesn’t make anyone cooler to dislike popular things. What exactly is the shame in liking only popular pop tracks? Music is not as important to everyone as it is to a few – and telling someone their tastes aren’t well thought or diverse doesn’t encourage them to branch out and diversify. Tastes aren’t something that can be forced, only insulted. In keeping an elitist attitude towards pop music, not only would the insulted become less interested in music culture altogether, but the insulters miss out on a line of music they may otherwise find enjoyable.

When Paul McCartney first heard The Beach Boys’ hit “God Only Knows,” he called it the greatest song of all time. The Beach Boys, like the Beatles, started out with a largely female fanbase, and are now a favorite of those who prefer music from another time. It seems to me that those who have this opinion are looking for popular music from another generation to exist in this generation’s popular music, disregarding how popular culture shifts as time does. That music does exist, but in less popular places, and finding it isn’t challenging.

McCartney adores Taylor Swift. Elton John looks up to Dua Lipa. Alanis Morrisette loves Olivia Rodrigo. You could too, if you looked up from your antiquated and underground tastes.