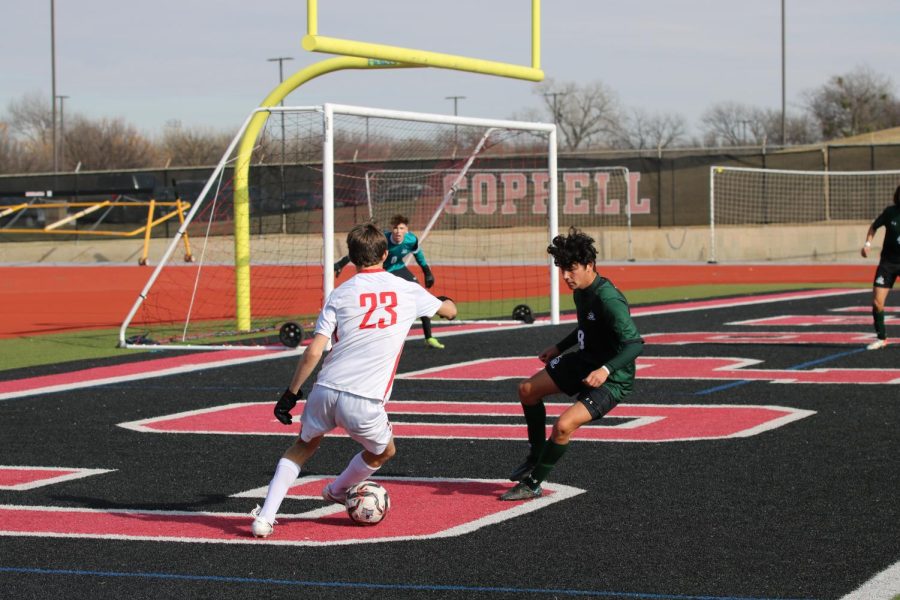 “[We performed well] in all three games this weekend and I think we can build off that,” Coppell senior midfielder Walker Stone said. “Throughout the season, as we’ve grown and played more together, we’ve built team cohesion and that really just shows on the field. We really work as a unit together and we put in good performances because of it.”

In Thursday’s match against South Grand Prairie, the Cowboys entered the half down 1-0 after a miscommunication between Coppell senior goalie Arath Valdez and Coppell senior defender Bryson Chen. Coming out of the half, the Cowboys knew it had to get on the board. Within the first five minutes of play, Coppell senior midfielder Pedro Perez scored, tying the game at 1.

“The boys knew we had to [come out] after halftime and find a goal,” Coppell coach James Balcom said. “We came out and found it five minutes in. Unfortunately, we couldn’t get another one to take the lead.”

The Cowboys held the score up to the final minutes of the match where, according to Balcom, the team became impatient in its defense. The Cowboys began to press against South Grand Prairie, allowing an opportunity for the Warriors to counter and score.

Thursday also marked Valdez’s first match as he returns to play for the Cowboys after playing the 2021 winter season with Solar Soccer Club.

“I’m happy to be back and playing with the team,” Valdez said. “Unfortunately, we didn’t get the win tonight, but we had a good performance.”

Friday’s match followed a similar trajectory, with the Cowboys and Reagan tied at 1 in the final minutes of the match, after Coppell junior forward Alfred Fairchild scored less than a minute after Reagan.

The Cowboys held this lead until the final minutes of the match, but couldn’t combat Reagan’s offense.

With two losses under its belt, the Cowboys needed a win. Against Rockwall Heath, the Cowboys were quick to get on the board, ending the first half at a score of 2-0.

The Cowboys grew their lead to four after the half. The Cowboys held their own and secured the win.

“Throughout the season, as we’ve grown and played more together, we’ve built team cohesion. It shows on the field that we really work as a unit,” Stone said. “This was [also] the first time we scored first in a game and it really boosted our confidence.”

The Cowboys travel to Lake Travis on Thursday to play Schertz Clemens at 2 p.m.