A retrospective on the storming of the Capitol, a year later 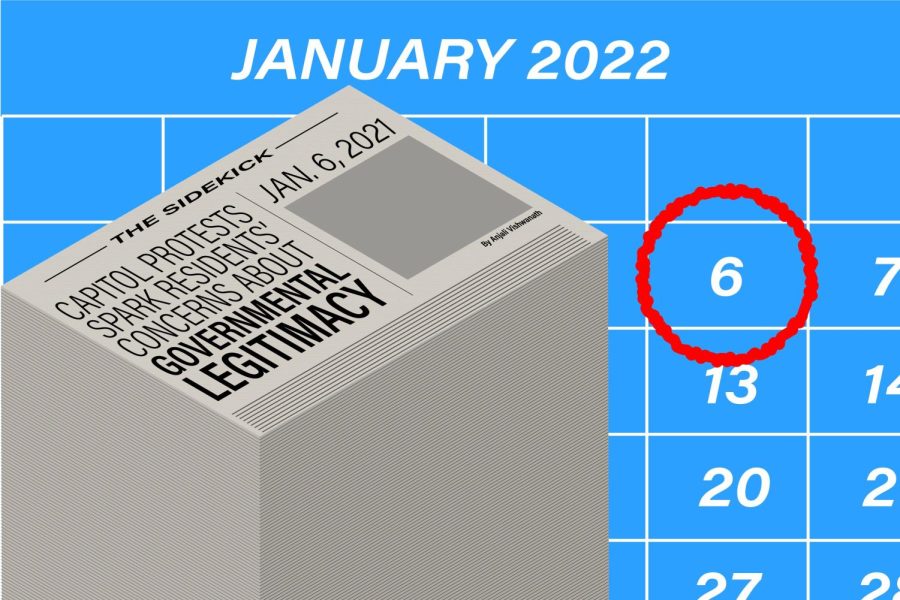 A year ago, hundreds of then-president Trump supporters stormed the U.S. Capitol to protest President Biden’s victory in the 2020 election. The Sidekick staff writer Yaamini Jois looks into the aftermath of the event and the significance of the riots.

Editor’s Note: This story has been updated from its original version.

A year ago, former Sidekick editor, journalist and documentary producer Angela Almeida found herself at the front of the height of political tensions as it unfolded. Almeida shared her perspective on the Capitol riots for Coppell Student Media.

“On a global level, the rest of the world viewed [the riot] as a testament to the death of democracy,” Almeida said.

On Jan. 6, 2021, hundreds of then-President Donald Trump supporters stormed the U.S. Capitol in Washington, D.C. For the past year, efforts have been made to identify those involved in the riot and five police deaths have been directly linked to the riots. The incident left the public shocked and in fear. It was a clear display of the state of government at the time and how easily a crowd could be mobilized whether it was positive or negative.

In the aftermath, many factors proved to be key players in chipping away at what was left at the connection between an already polarized political atmosphere. The riot marks the first of a modern event in which social media was significant before, after and during the incident, giving political figures a vastly unchecked platform to spread misinformation and disinformation.

Following the riot, President Trump was largely cited as encouraging the violence through Twitter posts, leading to a permanent ban. Trump was also pinpointed for spreading disinformation about the election after Biden’s victory was announced. Political partisanship and social media played a significant role in the event and how it played out.

“Social media directly caters to what you agree with, so disinformation is amplified without any checks,” said Shawn Hudson, AP World History and AP Comparative Government teacher at Coppell High School. “Being trapped in this bubble fuels the preexisting divide in politics.”

Social media presented different demographics with different sides of politics. For example, some described the riots as not violent, further defending the idea that division within politics stems from what each perspective is shown.

“There’s a lot of versions of what happened on Jan. 6, so it’s hard to say how accurately it’s being represented,” Hudson said. “The way that different narratives are told on social media shows how [politics] is portrayed differently in the media.”

For the public, the riot reflected the nation in disarray. Many questioned the legitimacy of democracy if the minority refuses to accept the majority’s decision. While some perceived it as the start of the end of the nation’s democracy, many present differing opinions on how those fears held up in the following year.

“The theory of democracy only exists if both sides continue participating after a loss,” Hudson said. “An act of violence that ensued directly from one party’s loss pushes a contradicting idea.”

However, another perspective of this incident is how it has been perceived in the year since. This perspective offers the idea that the riots are not unique and do not accurately represent the state of government since.

“It’s clear that the country is divided because of how stark the divide is,” Almeida said. “The popular vote was clear, so the riot doesn’t encompass the country or accurately exemplify [the voters].”

The extent of the impact of the riots are still contemplated, and students of Hudson interested in politics continue to discuss the incident in and out of class. CHS senior Nikita Nair closely followed the 2020 election and watched the riot on live television.

“Seeing it happen live was surreal, and there was an outpour of emotion and fear from the public,” Nair said. “[The riot] showed us the flaws [politics] had and exploited them.”

While the riots occurred in Washington, many Coppell residents felt the same anxiousness that a majority of the nation felt in the following weeks.

“A few Coppell residents knew rioters or had family members in it,” CHS senior Veda Kanamarlapudi said. “The incident really brought awareness to all of us on the state of our political atmosphere and how connected we were to it.”

Since the riot, more than 725 people have been tracked down and arrested for their roles. Out of the 71 people who have been sentenced, 64 have received misdemeanor sentences and 30 have been given prison time. The FBI continues to look for names of rioters.

Public opinion of Jan. 6 has not swayed since, an exception to many big events in American history. Opinions from different groups of people have not shifted significantly, whether it is about who is to blame for the event, if the 2020 election was stolen from Trump or the riots were a display of violence.

“In some respects, [the riot] had a huge impact on one portion of the public, but for another, not much has changed,” Almeida said. “For those who were frightened by the insurrection, that moment seemed like the pinnacle of how terrible things could get, and how the country could descend to chaos.”