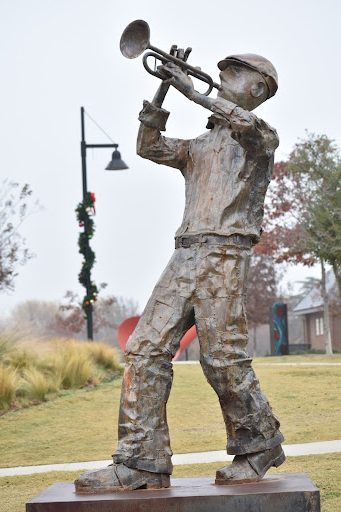 Mesquite police lieutenant George Hensely sculpted Amos, a life-sized scrap metal trumpeter, now exhibited in Andy Brown Park East. There are several sculptures throughout Coppell whose artists and origins are relatively unknown, but these artworks all share one thing: a home in Coppell. Photo by Anjali Krishna

Amos by George Hensely depicts a jubilant man playing the trumpet as Hensely Witnessed in his frequent trips to Louisiana. The massive 11-foot statue draws inspiration from the popular street art found throughout Louisiana and celebrates the joy of street concerts. Hensely utilized scrap metal and long-established blacksmith techniques to construct the artwork in an embracing of his pastimes beyond serving on the Mesquite Police Department as a lieutenant. Titled after a popular Jerry Reed song, Amos now towers over the children that prance around him in Andy Brown Park East.