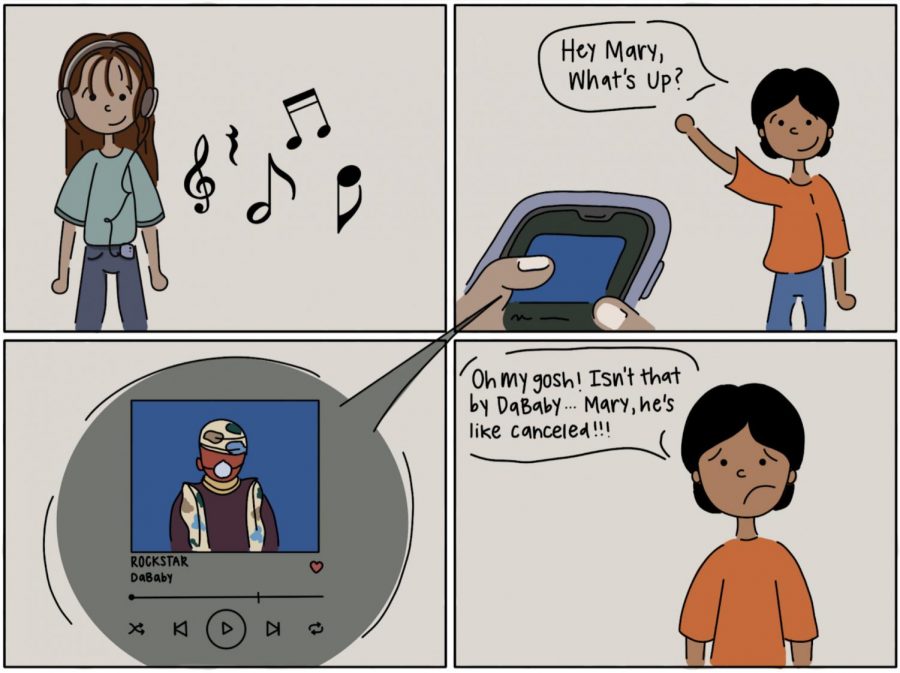 Many students have participated in the trend of “canceling” people, but they don’t recognize how detrimental “canceling” someone or being “canceled” can be. The Sidekick staff writer Anushree De explains the negative effects of cancel culture in school.

Among the hushed whispers of school corridors, a familiar phrase passes through my ears: “They’re canceled.”

Canceled is a term that’s use has substantially increased in recent years, disseminated through the rise of social media.

And no, I’m not talking about being canceled as in a game being canceled because of rain. I mean cancel culture: the practice or tendency of engaging in mass canceling as a way of expressing disapproval and exerting social pressure.

Cancel culture is like a boycott, except in a less history, more Twitter kind of way. In theory, a victim of cancel culture loses their platform due to controversy coming to light. This can be in the form of losing a platform: either by being unfollowed or losing friends.

In theory, this should work to reduce controversial opinions. In fact, it has. Celebrities who are canceled often apologize for their mistakes. Fans forgive them. Bam, we move on. But the solution to cancel culture is like a band-aid on a bullet wound: it’s a temporary solution, but it sure doesn’t last forever.

And that’s because of the effects of cancel culture. Cancel culture is based on a difference of beliefs, also known as polarization. Polarization is a problem, and it’s only exacerbated by social media. When we cancel individuals, often in masses, an individual can dig into their heels and try to maintain their reputation. In those cases, the canceled is unable to learn from their mistakes.

Others that are canceled become isolated from their friends for having controversial opinions. In my own school setting, I often see certain people afraid to mention their political beliefs for fear of condemnation. Others who do share their beliefs experience a loss in friends. The intolerance of other beliefs directly affects our political lives. By definition, politics should include beliefs that are controversial to inspire new ideas. When individuals are silenced for what they believe is right, they are unable to share ideas, destroying our definition of democracy.

You have probably heard of the common cliche of a kid eating lunch in the bathroom. Cancel culture does exactly that: leads to polarization and isolation, that in extreme cases, drives individuals to no longer be friends.

For the cancelers, with social media, a problem might be exacerbated far more than it was intended to. Often, cancelers share something they disagree with to their friends via social media. And suddenly, that belief is airborne. A battle is waged. People choose sides, and then, the problem is much bigger than it should have been.

In some cases, individuals are even doxxed (their private information shared online) for further condemnation. No high schooler should have their address posted online because of a belief, no matter how controversial.

And to our bystanders: chances are that if you’re anything like me, maybe you shy away from that drama. ‘That’s a little too heated for me’, you say. ‘I don’t want to get swept into all of this.’ So, you accept the cancelers’ words with a tentative shrug.

Bystanders can be driven to fear, afraid that anything they say can be used against them. The result of this unspoken fear of speaking is filtered conversations, where individuals skip certain topics. Soon enough, bystanders check. every. word. they. say, for fear of being grouped with the canceled.

Amidst cancel culture, we witness a game of hide-and-seek. A cruel game of hide-and-seek, where society tries to pick at faults of people like scabs until they start bleeding. We find every problem within a person, laugh at them for a few finite hours, being negligent of the infinite effects of our actions on the people we tease. We call out people so much, and rather than listening, we automatically condemn.

Rather than canceling, taking time to hear out individuals and letting them explain themselves might help change a canceled person’s mindset. To learn from mistakes, individuals must truly understand what error they made. Canceling someone doesn’t help with that. Imagine someone ignoring you whenever you made a mistake: you would never understand what you are doing wrong. Rather, calling out an error and talking about it has far greater benefits. This way, the canceled can identify their mistake, apologize for it, and ensure it does not happen again.

And yes, sometimes being harsh is absolutely necessary to ensure people are aware of the consequences of their actions. But is cancel culture always just? A majority of answers point to no. So, maybe we should cancel “cancel culture.”