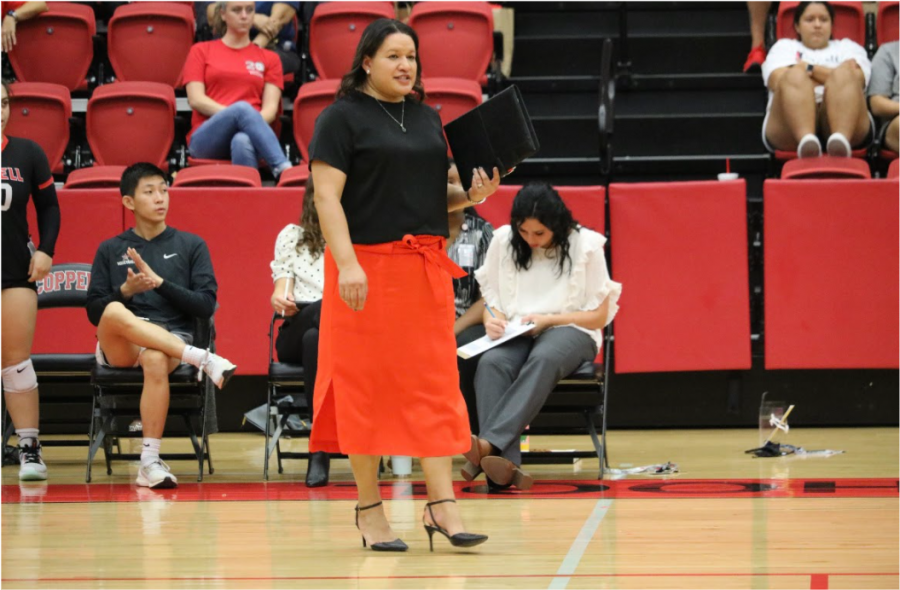 Coppell volleyball coach and girls athletics coordinator Libby Pacheco is leaving the program at the end of the semester to become chief operating officer of the Texas High School Coaches Association (THSCA) and Education Foundation.

“It’s a once in a lifetime opportunity [for Pacheco],” Pehl said. “They recognized the same greatness we did when we hired her; we would love to have had her a little longer, but her greatness is something they recognized. She’s going to be the first female in the organization in its 92-year history.”

“Coaching is kind of a small circle, and a pretty tight fraternity so [Martin and I have] run into each other in the past and he’s followed my career through coaching and administration,” Pacheco said. “He felt that I would be a good fit for the association and contacted me about the position. I quickly accepted the job once I knew the impact that I could have on the entire state.”

Pacheco will be the first association’s first COO.

“Part of this association includes an Education Foundation,” Pacheco said. “That part of the organization is in charge, specifically of the educational pieces, and the character development of coaches. There’s a mentor program that pairs veteran coaches with rookie coaches. I will also be in charge of other initiatives to help grow the profession.”

With this being a full-time position, Pacheco will be resigning her position as head volleyball coach and girls athletic coordinator effective Dec. 17, having only held these positions for a singular season. Pacheco will assume her new role on Jan. 1.

With Pacheco leaving, the Cowgirls will have had three different head coaches within the past three years.

“We were all taken by surprise, we did not think we would get three new coaches in three years,” Coppell junior outside hitter Skye Lamendola said. “Most of us play club so we transition to a new coach every year anyway, so getting a new coach isn’t something that’s super out of the ordinary. But, I think we would definitely have a stronger bond if she had stayed and we would have adjusted as needed with Pacheco.”

According to Lamendola, Coppell assistant Haley Tippett will be stepping up in the absence of a head coach.

Accepting this new position was not an easy decision for Pacheco.

“One of my overall professional goals has always been to mentor coaches and build the profession,” Pacheco said. “While this is still in the realm of education and coaching, it still meant that I was going to have to resign my position at Coppell. That was a big consideration for me as well, especially since I felt like I had just begun my career [here].”

According to Pehl, positions for head volleyball coach and girls athletics coordinator will be posted to the district’s website later this week.

“The one thing we told the girls is that our assistant coaches are absolutely committed to being here and making the transition to the new head coach, that way it’s consistent depending on how long it is until we get our new head volleyball coach in here,” Pehl said. “Even if that time is a little longer than we’d like, knowing that we have committed assistant coaches that were their coaches this year, and will be again next year, that’s a big deal for those girls.”