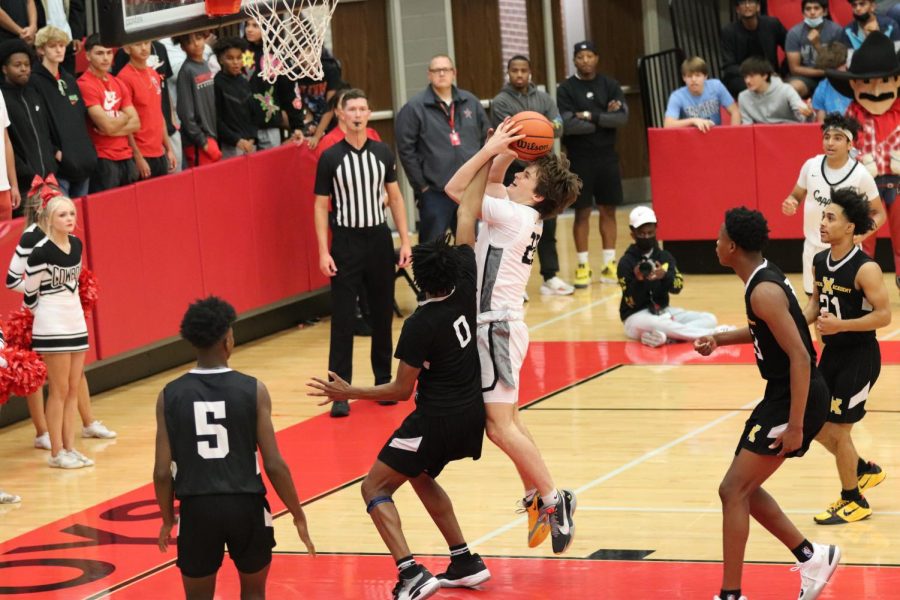 Coppell senior guard Parker Clark is fouled by Vertical Academy junior forward Tim Hall Jr. as he goes for a layup on Friday at CHS Arena. The Cowboys fell to Vertical Academy, 73-65.

Altering a school day and selling out a facility for a game is not an ordinary occurrence for any Coppell athletics team, but this wasn’t just another ordinary game for the Coppell basketball team.

Its nationally-televised clash against Vertical Academy at CHS Arena headlined The Battle Basketball Showcase and provided quite the viewing spectacle for the neutral fan.

“I was just excited because I’ve never played on national TV; it was a dream [for me] and I thought that day would never come to be honest,” Coppell senior wing Ryan Agarwal said. “Throughout the game, we never gave up: it was always, ‘we have to come back, we have to win’. Obviously, some injuries slowed us down but some guys stepped in off the bench. The whole mentality was to compete and never give up and that’s what we did.”

Despite battling through scoring runs by Vertical Academy and losing three starters to injuries late in the game, Coppell came up just short, losing to Vertical Academy, 73-65, on Friday.

“I was proud of our effort; when you have a game like [yesterday’s] in front of the TV [audience], huge crowd and it’s the first game of the year that is a big environment and a lot of fun to play in, the guy’s responded,” Coppell coach Clint Schnell said. “I’m sure there were a few nerves in there but I didn’t feel like we played with that, we came out, executed the game plan and put up quite a fight against a really good team.”

The offensive capabilities of the AAU-style Vertical Academy roster were seen from the get-go. Despite a dunk from Agarwal to open the scoring, the Cowboys trailed 8-2 not even a minute later. The Cowboys would respond, however, using a three-pointer from Coppell senior guard Naz Brown, using strong defense to force turnovers and a couple layups from Agarwal to knot the game at 11-11 with 3:55 left in the first quarter

The fourth quarter saw key players for Coppell go down with injuries.

Coppell lost three of its starters to injury. While at midcourt, Agarwal was struggling to stand and fell to the court writhing in pain and screaming for the trainers. While Agarwal tried to get back up, he almost stumbled down again before Brown and Coppell senior guard Devank Rane helped him off the court. Brown had just returned from a torn ACL, and also started feeling pain in his calves. Similar to Agarwal, Coppell senior guard Noel Berhe felt his calves cramping up and was unable to stand as he limped off to the bench.

Rane was left as the lone starter on the floor with his teammates off due to injury and rotation. Concurrently, Vertical Academy made flashy plays, lobbing the ball from one side of the court to the other for windmill dunks and alley-oops. Rane, however, kept his team calm and collected.

“I was just saying [to my team], ‘they’re going to make these flashy plays but that’s something we don’t have to worry about, we just have to focus on playing our game and giving ourselves the chance to win a game’,” Rane said.

According to Schnell, the Cowboys put together a very encouraging performance in what he calls ‘the biggest event he’s played for’ based on their ability to battle through tough spots against top-quality opponents and the ability for them to step up and perform whenever their name is called.

Schnell stressed that the importance, now, is for Coppell to embrace this game as part of its identity, to make that performance how the Cowboys perform against any team and not just for national TV.

“Every game [needs] to be a testament to how good our team is,” Brown said. “We need to play the same way whether it’s a big-time player or regular guys because we’re a bunch of regular guys to everyone else. We have to take that same mentality into every game.”

Despite the loss, Coppell’s performance and experience playing high-level teams will only help it going into a schedule that features some of the best teams across Texas.

“We know we have a tough schedule this year and we know that we’re going to have a target on our back so we don’t want to be the team that lets everything down,” Schnell said.