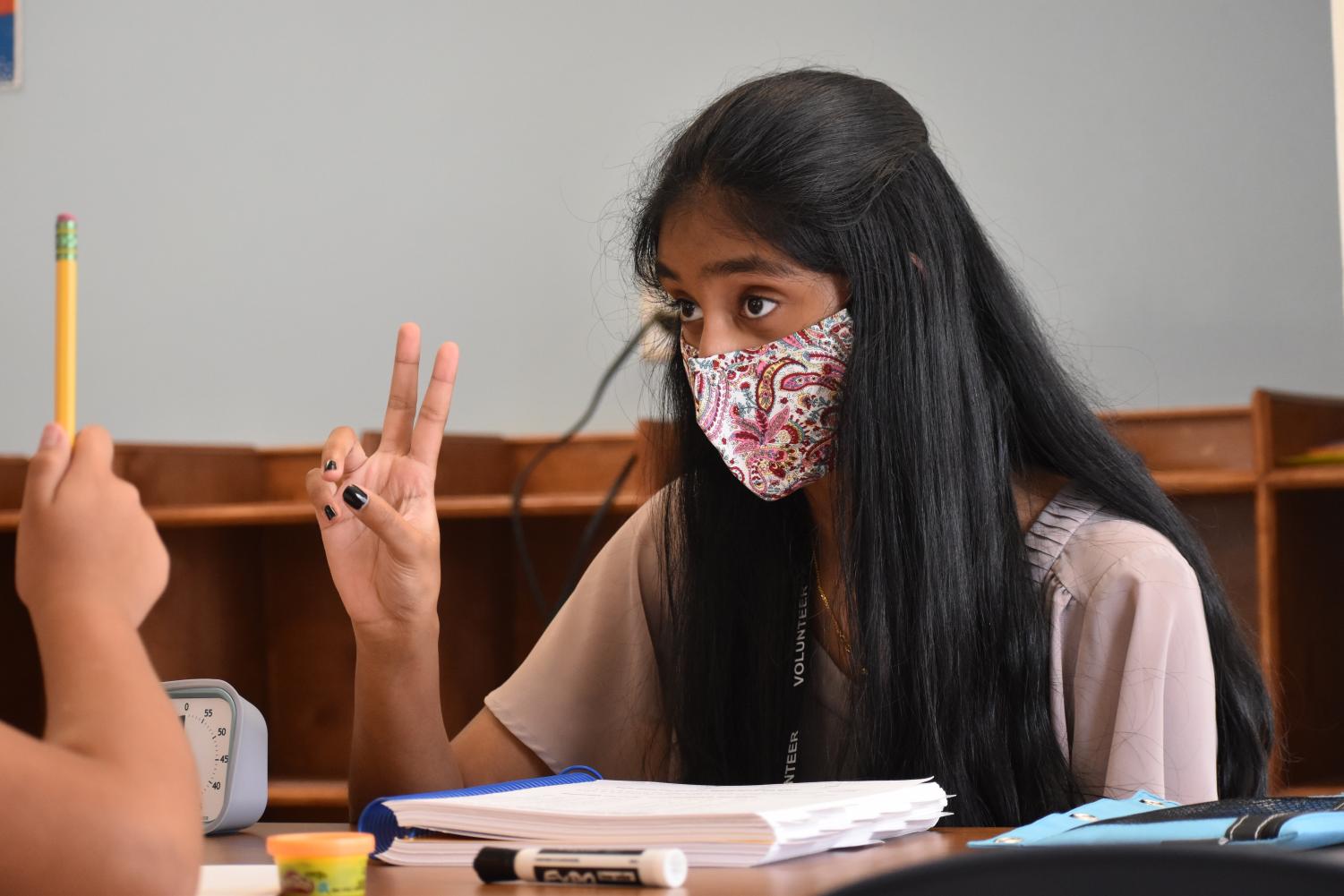 Coppell High School senior Veda Kanamarlapudi teaches a fourth grade student how to speak and write English at Wesley Rankin Community Center in Dallas on Sept. 18. Kanamarlapudi volunteers to teach English as second language students how to read and write.

To profile a language lover

It’s 8:45 a.m. on a Wednesday and Coppell High School senior Veda Kanamarlapudi is upset about the umlaut.

She makes an impassioned monologue on its beauty in the Turkish language (“The sweetness of those vowels, so precise”), and then does a quick turnaround onto another linguistic caveat understandable only to other academics. (“You’re going to have so many unfinished thoughts – I start something and it leads me to a different thing, so you’re just going to have to deal with this.”)

The last time I met Kanamarlapudi at George Coffee + Provisions, a favorite spot of hers, she pulled out a book in Italian and casually mentioned she was translating it as she read to brush up on the language. Today, when I spot her sitting, sipping leisurely from her ever present Hydro Flask, I don’t expect anything less impressive.

She delivers, immediately sucking me into a conversation about nominal declension. Only when she pauses speaking to show me a chart on the German noun endings do I realize 30 minutes have passed and I know a little more about conjugating nouns than I’d ever learned in my freshman year Spanish II class.

“Because a thing I like is relatively obscure where we are, it makes me seem like I’ve understood this strange concept nobody can understand, but I think a lot of people would be able to do it,” Kanamarlapudi said.

It’s academic, a conversation with Kanamarlapudi about language, or anything really, each word impassioned and subtly illuminating. When she gives an example, she questions you about it, just like a teacher would in class. Perceiving her as the professor she hopes to be at one point isn’t difficult – she’s already got the teaching part down, helped by her volunteer work at Wesley Rankin Community Center in Dallas teaching children English.

Kanamarlapudi knows languages ranging from English, Spanish, French and German to Turkish, Telugu and Hindi, though she’s hesitant to confirm herself as fluent in all. At home, she speaks Telugu, having learned Spanish and French at school and the others by herself.

“Part of what drives me to study language, language evolution, reconstruction and systems is having immigrant parents and being some weird mix of Indian and American in [Coppell] that is overwhelmingly Indian,” Kanamarlapudi said. “So it’s this weird cultural identity of being away from home and wanting to know more about home and missing home, because I can only go every few years. That distinction, of being an American [Ve-da] and an Indian [Ve-dha] helps me seek more answers about culture and language.”

Whatever she’s saying, regardless of how deep or how shallow, whether about her religious beliefs or her thoughts on a particular piece from AP art history, is deliberate. Even her self-awareness is something she spends a good deal of time contemplating. Upon my mention of my disappointment in my inability to read Gabriel Garcia Marquez in Spanish, how it was intended to be read, her reply was raring to go.

“I always wish I knew more languages from a young age,” Kanamarlapudi said. “But if I knew them, I wouldn’t be able to appreciate how beautiful they sound just from a very auditory perspective. Of course, when we read we can say, this English is so beautiful and that is a language skill, but the other day I was reading a book in Spanish and for the first time I thought, ‘this is so beautiful, the way the author put this’ and I was so happy that something that sounded good meant something good.”

But linguistics isn’t purely academic to Kanamarlapudi. As she explains phylogenetic history of the Dravidian language family or her odd mixture of spoken Telugu and English with her family, she slips in and out of Telugu, my native language as well. It’s something she takes pride in, her ability to communicate in other languages and teach them as well, her eyes lighting up when my own flash with understanding of a term or example.

“For my students, Spanish will have un arbol,” Kanamarlapudi said. “And for us it’s a tree, or even a chettu in Telugu. It’s the same thing but it exists in multiple forms. I’m not telling them that un arbol is wrong, I’m just telling them it’s also a tree. I’m not disputing what they already know but I’m adding to it and making it a multiform perspective of the world. As wonderful as it is to see someone speak their own language, it’s just that amazing to see someone understand something.”

That, to Kanamarlapudi, is the magic of teaching and learning language. While researching and reconstructing old languages is something she hopes to pursue as a professor, Kanamarlapudi’s love for language intertwines seamlessly with her plans for law school, particularly the aspect of semantics and logic.

“Veda is really mature for her age so she connects well with her teachers because she enjoys stuff that maybe students don’t enjoy all the time,” CHS French teacher Nathalie Deines said. “She is just a beautiful person – she has a big heart and she is so kind. She’s above the other students – she wants to learn, she wants to speak, she wants to ask questions and she is not afraid. She’s really an exception, very exceptional.”

In addition to teaching English, Kanamarlapudi is also involved in a project with CHS senior Aarushi Jaiswal in which they translate classic Indian stories into Spanish, allowing them to be spread to a wider audience. Missing her grandmother and the stories she used to read to her, Kanamarlapudi pitched the idea to Jaiswal late one night.

“She’s taught me the importance of going into things with your whole heart because there’s so much to be taken away from any experience and a lot to educate yourself on, always,” Jaiswal said.

Although each language holds different interests for her, it’s when she comes to her own cultural and linguistic heritage that she comes into her own. Her namesake of the Vedas, the primary Hindu religious and Indian cultural text emphasizes her connection (“I like to explain to people by saying I’m the Hindu equivalent of a kid named Bible.”)

“I love to talk to people who love something so much that they just feel like they have to talk about it,” Kanamarlapudi said. “When my mom can’t find the right words for something in English and she slips into Telugu, she’s able to say things in a way that makes more sense to her and personality traits come out that way. That’s why I like to listen to people talk about what they love, because it’s like hearing them talk in their native language.”

But there’s something she feels she didn’t get to think through or figure out fully in the moment, a question I asked about whether her passion could ever be something other than languages. Hours later, she sends an urgent text with her reply that she thinks she would come back to linguistics, the question clearly having been on her mind. Just after, she says jokingly, “I wish I wasn’t so self aware” and I think back to when I asked her something like “how are you so smart?”

“I don’t think I’m smarter than anybody or everybody,” Kanamarlapudi said. “God said make Veda curious’ and I just ran with it.” 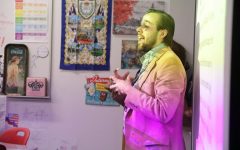 Teacher of the Week: Chanin teaching at CHS after graduation from New Tech 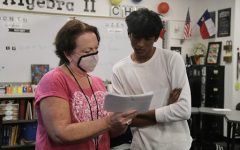 Teacher of the Week: Bellish returning to campus as a substitute teacher 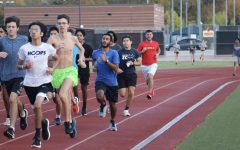 Student of the Week: Ali strives to cultivate dedication, support teammates in pursuit of excellence 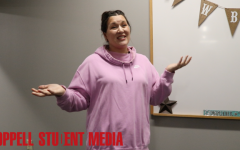 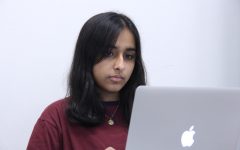 Student of the Week: Arora acting as an example for managing school, work, social life