Former Cowboy to Aggie legend: Choate goes down in history after being named 12th Man 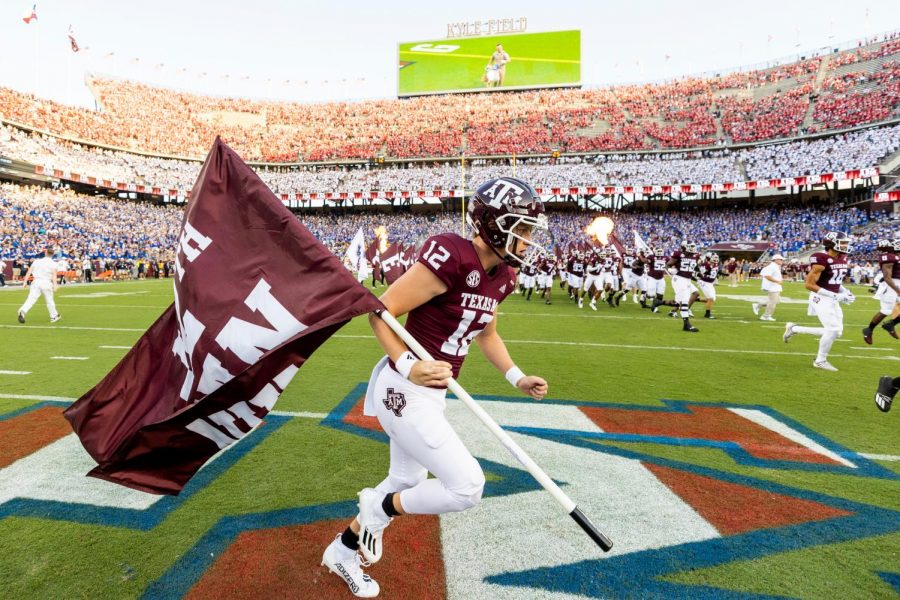 Texas A&M deep snapper Connor Choate runs the flag for the Aggies against Kent State on Sept. 4 at Kyle Field. Choate, a Coppell High School 2017 graduate, was named as the 12th Man for this year on Aug. 28.

Editor’s note: This story has been updated from its original version.

While deep snapping is crucial to the success of any special teams play, the deep snapper rarely gets the recognition that they deserve.

To most, he is just another deep snapper in collegiate football but for the Texas A&M football program, Coppell High School 2017 graduate Connor Choate is one of a handful of players to go down in football history after being designated as the 12th Man by Aggies coach Jimbo Fisher on the morning of Aug. 28 in a team meeting.

“I wasn’t really expecting it but it was just super awesome to see all my hard work pay off,” Choate said. “It was a great honor being named the 12th man, I couldn’t have been happier and it was just a really great time for me and my family. I’ve gotten a lot of support from students, family, friends and my teammates were really great about it, congratulating me and making it feel extra special. Even people from Coppell have reached out to my family and offered their support; it’s just been really special to see how many people it’s reached and how big the Aggie network is.”

A tradition that dates back to 1922, the 12th Man at Texas A&M is one of the most iconic and historically significant pieces of its athletic history, so much so that the original 12th Man, E. King Gill has a statue outside of Kyle Field.

The tradition was born during the Dixie Classic on Jan. 2, 1922, when an underdog A&M team was playing Centre College, the nation’s top team at the time. As the game wore on, the Aggies found their numbers dwindling due to a plague of injuries when coach Dana X. Bible remembered Gill, a squad player, who was in the stands, helping reporters identify the players on the field.

Bible called Gill from the stands and Gill suited up and stood ready throughout the rest of the game. A&M ended up pulling off the upset, 22-14, and Gill was the last player remaining on the bench.

Gill’s readiness for service, desire to support his team and drive helped ignite a flame of devotion that resounded through the Texas A&M students and community. The devotion passed down generations and saw the entirety of the A&M student body become the 12th Man because the 12th Man is always in the stands, ready to be called upon.

According to Choate, he is the first deep snapper to be named as the 12th man.

“Wearing it is a great honor and it gives me goosebumps the few times I’ve run out [onto Kyle Field], it’s been insane. It’s a great privilege,” Choate said. “Representing the university is the top priority for me.”

Since being named the 12th man, Choate has received loads of recognition as he walks around campus and in College Station.

“It was very different than it was before; just by looking at me, you wouldn’t think I am a football player and the recognition has been kind of funny,” Choate said. “I am still getting used to it though.”

And while Choate might not have started his collegiate career with the Aggies (transferring from Memphis), his drive and team-first mentality glows from his personality as soon as he steps out of the locker room and onto the field.

The passion he’s shown the Aggies, though, started in him when he took the field as a deep snapper for the Cowboys under Coppell coach Michael DeWitt.

Despite having experience snapping while playing center in his early years of football, Choate decided to move to playing as a tight end and outside linebacker. It wouldn’t be until the end of his sophomore year where Choate’s snapping sense called back to him.

During that spring of his sophomore year is when Choate really made the switch and embraced the position as his own after winning over the starting varsity job. Through the last two years of his high school career, Choate worked in the depths and in countless hours by himself to perfect his craft and became nationally recognized as one of the best snappers nationwide.

“The thing that sticks out most to me is his work ethic,” DeWitt said. “We have this thing called the 10,000 ball club where receivers and defensive backs come in on their own and, by the end of spring, they’ve caught 10,000 balls and he decided on his own that he wanted to come in and snap 10,000 balls one spring and that was a testament to his work ethic.”

Though his snapping ability impressed the coaches on the field during his time at Coppell, his infectious personality and work ethic leaves a lasting impression for all those going through the Coppell football program.

“His teammates trusted him, he had passion about the game, the way he played the game [and] passion about the sport and his position,” Coppell assistant Karl Pointer said. “As for discipline, to be as good as he was and to excel at practice and do those things, no one wants to go wake up in the mornings and snap a medicine ball between your legs against a wall over and over again but that’s something he did everyday.”

Even in the classroom, Choate exuded the sociable personality that propelled him into the role of 12th Man. During his sports entertainment marketing class at CHS, taught by Richard Chamberlain, Choate’s charismatic and leadership qualities made younger athletes gravitate towards him and allowed Conner the ability to jostle and motivate the people in class.

And even though Choate will go down in A&M history as the 2021 12th Man, he began to shine on Buddy Echols Field and in the classrooms of Coppell High School. Choate’s legacy serves as a true inspiration for the Coppell football program, where he is, forever, a Cowboy.