We need to stop talking about grades 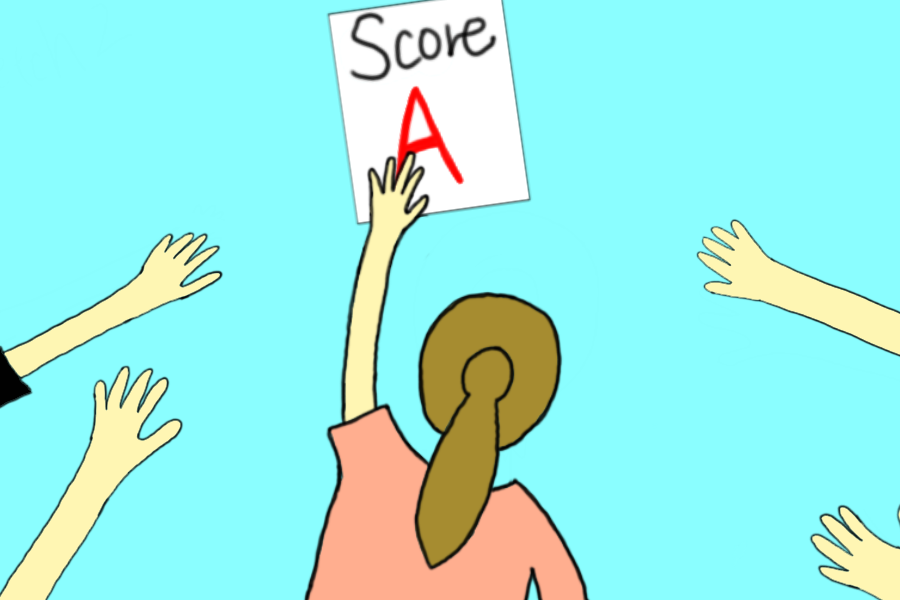 Many people strive for “perfect grades” as a confirmation of their intelligence. However, The Sidekick daily news/assignment editor Anjali Vishwanath believes intelligence is independent of grades.

Control my expression. Flip over the paper. Duck out of the room.

“Hey Anjali, what did you get on the test?” My heart drops.

My instinct is to defend my intelligence, which isn’t defined by a tough year in pre-algebra. But to my classmates, grades are an instant confirmation of their intelligence, especially in comparison to their peers.

However, grades are not meant to define intelligence. All they measure is where you stand in a certain class. But I couldn’t convince them of that, so I’d count on our teacher’s inevitable disapproval to break up the gaggle forming in the hallway, gifting me a window of opportunity to escape.

“It’s always troubling to think that students base their self worth on grades,” Coppell High School National Honor Society sponsor Kevin Casey said. “Each individual is different. Each teacher is different. Each class is different. The dynamics of each class are different, so there could be mitigating factors which affect a student’s grades, and I’m very troubled that those grades might have such an influence over a student’s self assessment.”

Basing self-worth on grades is unfortunately very common. Where I grew up in Massachusetts, my peers and I were essentially conditioned to believe that grades were everything. This was in part a result of living in one of the highest scoring school districts in the state, and in part due to pressure over grades being almost central to Asian-American culture.

It’s the stereotype: the Asian immigrant ‘Tiger Moms’ pushing their kids to excel in school and in life? Parental pressure isn’t always the problem, though; the pressure people put on themselves is infinitely more detrimental. My own parents never pressured me or my sister about grades; we put that pressure on ourselves. We let our peers put that pressure on us.

Because even though we went to school a decade and a generation apart, the terrain was unchanged, and the drowsy conversations of the buses still eventually gave way to questions about test grades, class averages, honor roll, standardized test results, extracurricular activities and college applications.

At the end of the day, these are all things this generation has been telling itself matter above all else. The standards have never been higher to get into college or start a post-high school career. Where high school students in my parents’ generation were focusing on school and one extracurricular activity, Gen Z high school students are participating in multiple clubs, sports, internships and jobs while achieving above-average grades.

“Playing those comparative games doesn’t apply – each person is different,” IB diploma programme coordinator Michael Brock said. “So you need to be careful about thinking, ‘I have some kind of value in this way – being intelligent or not, smart or not – based on what another person is doing. Focus on how comfortable [you are] with [yourself] and what can [you] do to grow as a person, as opposed to how [you] compare to somebody else.”

I’ve scaled back my extracurriculars since moving to Texas. Even though I’ve heard that Coppell, like many other high-performing school districts, is competitive, moving here was something of a breath of fresh air. Rather than being bombarded with endless conversations about grades, I hear people talking about their dream schools and majors in the hallways. Certainly, students are still extremely busy, and I am on the bottom end of that sliding scale, but I have yet to encounter a student condescendingly comparing grades to another. Rather, I’ve heard people panic together, laughing about a hard test and assuring each other that the final exam has to be easier.

So pass around the box of tissues after test day instead of trading scores. You’ll never know whether those tears are over a perfect grade or a terrible one.