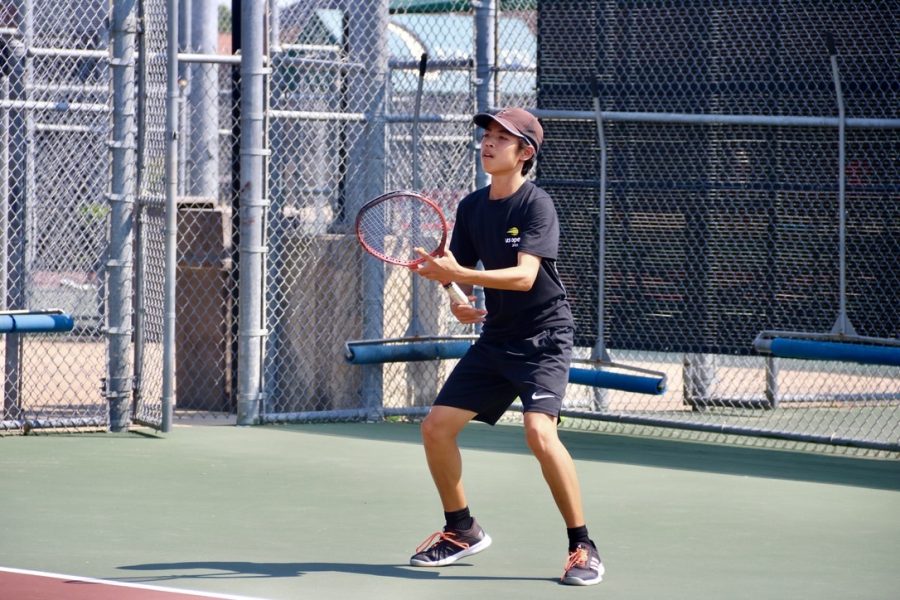 Coppell tennis starter Riki Koshimizu warms up for practice on Thursday during fourth period. Koshimizu has been on the Coppell tennis team since his freshman year on JV1 and moved up to varsity within a year.

A naive, confident sophomore steps up to the tennis court, ready to defeat his opponent. A sense of fire is replicated by the triple digit heat in his face, but also in his game. Coppell sophomore varsity tennis player Riki Koshimizu hits the ball back and forth with a fiery personality.

After playing on the JV tennis team his freshman year, Koshimizu moved to varsity starter this school year because of the hard work and commitment he put into tennis. However, he was not at the top of the JV team during his freshman season.

“[When I found out I was a varsity starter], it gave me a lot of confidence,” Koshimizu said. “It made me realize that I might be good and I can do something with tennis. I never expected it.”

Koshimizu’s journey to the varsity team may seem ambitious to some as he spent 30 to 40 hours a week playing tennis or watching professional tennis over the summer.

“He thinks about tennis all the time,” Coppell senior teammate Reid Lucas said. “It’s the only thing in his mind. He plays before school and after school. The only requirement is to play for about two hours a day, but sometimes he hits in the morning, then we have practice at 2:30 p.m. and he will be at the tennis center until 9, that’s just insane to me.”

However, even with a thirst and desire to do his best, Coppell coach Rich Foster helps Koshimizu learn to control his emotions. Even though losing a point can hurt, Koshimizu is working on making sure this doesn’t affect the rest of his game.

“[Koshimizu has a] fiery personality,” Foster said. “There’s good and bad to that. It’s like a double edged sword. I have had to take him aside and say ‘you can’t get upset like that.’ He gets upset about a point and it may roll over to the next point and cost him. But I will take the bad with the good. He can build off of his fiery personality.”

Foster highlights Koshimizu’s open mindedness and receptive nature to feedback as it strengthens him as an athlete. Koshimizu practices the drills and verbal suggestions that he receives from Foster to improve his game.

“He listens to me,” Foster said. “Not all tennis players listen. Tennis players are kind of stubborn and selfish in a lot of ways. But Koshimizu will listen to me. He acknowledges when he is getting emotional. He is very coachable.”

In addition to his intense charisma on court, Lucas thinks Koshimizu has a softer, youthful side as he is one of the younger players on the varsity team. The first time Lucas saw Koshimizu, he thought he was funny, naive and made of youngblood.

A love and appreciation for tennis was installed in Koshimizu’s heart, at a young age – the summer between sixth and seventh grade – on a trip to Japan to visit his grandfather. This inspired Koshimizu to join Coppell Middle School East’s tennis team in seventh grade and work with Coppell coach Anthony Smith. He hasn’t put down his tennis racquet since then.

“I wanted to join [my grandfather],” Koshimizu said. “I told him that I wanted to play against. He was like, ‘you are not fit yet.’ So that made me like ‘I want to get better. I want to play against him.’ That’s why I play tennis. I haven’t had the chance to play him yet, because of COVID-19, but I will try when I go back.”

The heart and mind that Koshimizu has for tennis does not go unnoticed by his coach.

“He is the tennis equivalent of what a basketball coach calls a ‘gym rat’,” Foster said. “[The coach] has to kick gym rats off the basketball court when he’s locking down the gym. That’s Koshimizu. I was working summer camps up here all summer long and I saw him continuously. If he wasn’t hitting, he was serving. He was always working on his game.”

By the end of this school year, Koshimizu wants to be in the top five tennis players on the varsity team. His long term goal is to improve his Universal Tennis Ranking (UTR) from a seven to around a 10 or 11 by the end of his senior year. His fiery personality combined with his kindness might be just right to achieve this goal.

“He has a contagious personality,” Foster said. “You hardly ever see him without a smile on his face. That’s one of the things that I love about him. He loves tennis. He loves his teammates. He’s a great part of this team.”