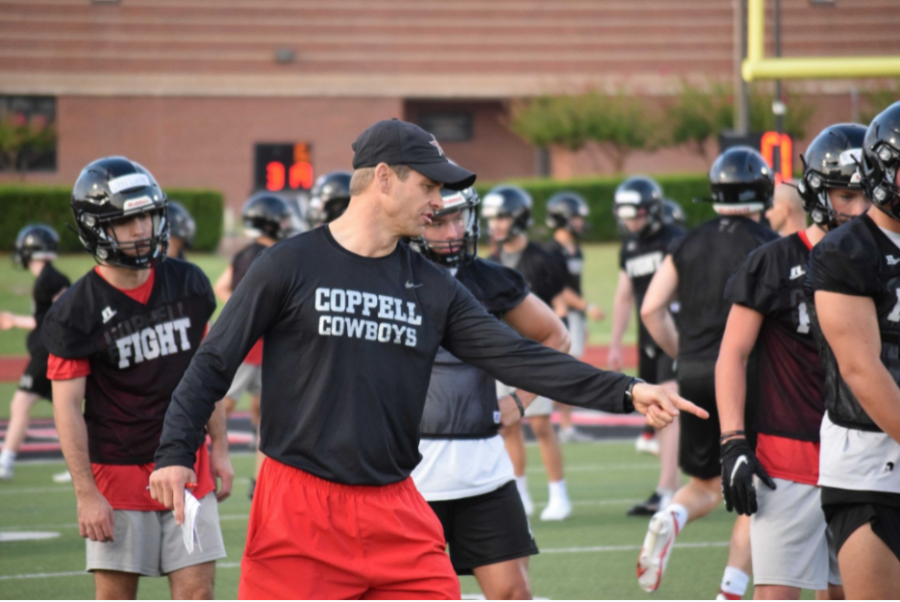 Coppell coach Michael DeWitt instructs the defensive backs during a footwork drill on Aug. 10 at Buddy Echols Field. The Cowboys play Sachse tomorrow night at 7 p.m. for their season opener at Homer B. Johnson Stadium in Garland.

After a grueling offseason and months of dedication, the Coppell football team is ready to see those Friday night lights. For the young team, this game calls for an opportunity to redefine Coppell football.

“To me, the first game of the season is a tone setter for the rest of the games,” Coppell senior offensive lineman Alvin Ebosele said. “It’s when a team finds out who they are, what they need to improve on and what kind of team they’re going to be.”

Coppell plays Sachse in its season opener game tomorrow at Homer B. Johnson Stadium in Garland, kickoff at 7 p.m.

The Cowboys have been preparing for Sachse’s tough offense and defense coming into the game. According to Coppell coach Michael DeWitt, Sachse’s offense focuses on running the ball and utilizing Sachse senior quarterback Alex Orij who is committed to Virginia Tech. It’s defense will likely compose of a four man front with two middle linebackers. The team also has strong running backs and linebackers.

“Our game plan is to establish a strong running game, have as few mistakes on the offensive line as possible,” Ebosele said. “Offensively we’re going to have to put a lot of points on the board because Sachse’s offense is extremely capable.”

In practice the Cowboys have also been focusing on defensive formations and alignment.

“If we can defensively contain the run and stop the quarterback then we’ve got a really good chance,” DeWitt said.

Coppell is bringing key players into this game as well. Ebosele is committed to play at Baylor, nationally ranked Braxton Meyers transferred to Coppell, and Coppell junior quarterback Jack Fishpaw will be taking on QB1 for Friday’s game.

With a solid game plan all that’s left is the team’s mentality, which the Cowboys have emphasized through team dinners and activities.

“Our mindset is the most important thing,” Ebosele said. “During our scrimmage we had a lot of first time starters, a lot of them were nervous. Once they get on the field and start having fun is when the mindset really changes. It’s less about trying not to make a mistake and becomes more about trying to win every rep.”