Tale of Two Tides: Baseball bows out in regional semis after thrilling series loss to Keller 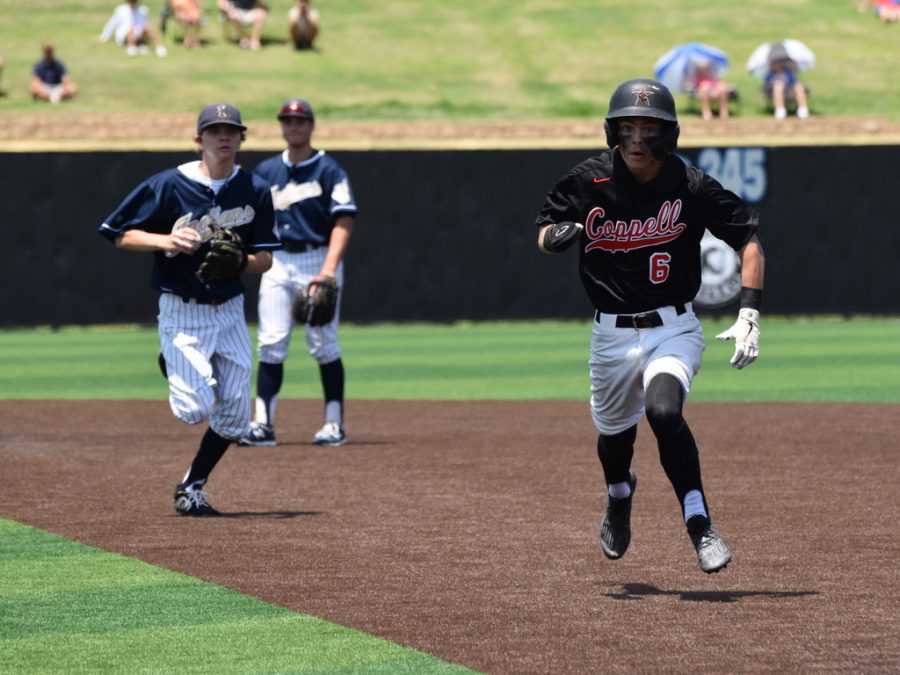 Coppell junior courtesy runner Carter Fields returns to first base in a rundown, scoring senior right fielder Will Rodman in the process against Keller yesterday at Denton Guyer. The Cowboys lost the decisive Game 3 on Saturday, 7-1, and ended their season as Class 6A Region I semifinalists after losing Game 1 on Thursday, 5-2, and winning Game 2 on Friday, 6-5.

DENTON – Coppell baseball knew that, coming into this series, Keller would be the toughest team it would have to face if it wanted to secure the lucrative trip to state. The series highlighted by the matchup of  Indian’s plethora of Division I talent against an underdog Coppell team that embodied the phrase “Cowboy Fight Never Dies” did not disappoint.

The flare of both teams was put out on full display in front of packed stands in all three games as both teams combined for six total home runs and strong, shutdown pitching and defense from both squads.

Despite the rallying cry from the Cowboys after a comeback victory in Game 2, Coppell was not able to recover after Keller’s early scoring in the first inning of the decisive Game 3 on Saturday.

Coppell ended its season as Class 6A Region I semifinalists after losing Game 1 on Thursday, 5-2, winning Game 2 on Friday, 6-5, and losing Game 3 on Saturday, 7-1, to state-ranked Keller at Guyer.

“Coppell has been the best defensive team that we have seen all year,” Keller coach Rob Stramp said. “They are outstanding defensively, they are better than us defensively and we might have a slight edge in the hitting department, but our hitting is pretty similar. We didn’t always pitch well in this series but we were very evenly matched throughout the series. I have a lot of respect for their coaches and their program.”

The opportunity for either Coppell (31-9-1) or Keller (33-6) to stamp its name down as an elite Class 6A Region I team and secure a trip to the regional championship presented itself in front of packed stands in the winner-takes-all Game 3.

Keller’s three runs in the first inning, while adding in a three-run homer from senior right fielder Clayton Thomas in the bottom of the fifth, coupled with shutdown pitching from senior pitcher Braden Davis was too much for the Cowboys to handle and enough to ensure the Indians’ victory.

“[Playing against Coppell] drains you emotionally and it’s tough to get back at them but our guys came out today and made it happen,” Stramp said.

The scoring for the Indians started with an RBI single from senior first baseman Gray Rowlett, while Davis added in a single two batters down to score the second and Thomas plated the third run with a sacrifice fly to give Keller the 3-0 lead.

Coppell brewed its own offense in the second inning by getting the bases loaded off a pair of walks and a single with no outs, but Davis was able to relieve the pressure with a flyout and a pair of strikeouts.

It wouldn’t be until the top of the fourth inning where the Cowboys would get on the board, with senior right fielder Will Rodman stealing home on a rundown to cut the deficit to two. But, Keller soon restored the lead back to three after a sacrifice fly in the bottom of the fourth.

Thomas took the game away from the Cowboys with a two-out, three-run homer off of Coppell sophomore reliever TJ Pompey and Keller reliever Zach Gonzalez eliminated any possible comeback for the Cowboys by retiring all six batters in the last two innings.

“When he hit that homer off of me, it was pretty heartfelt and pretty hard to take,” Pompey said. “We knew that there was still a chance, but the end didn’t go our way. We are definitely going to remember this and take it on the shoulder, watch out next year because we’re coming back.”

Coppell senior pitcher Chayton Krauss was tagged with the loss with four strikeouts in six innings, surrendering nine hits. Davis took the win with nine strikeouts and four allowed hits over four and two-thirds innings. Coppell ended its playoff run with its deepest playoff run since 2016.

“This group is a very mature group, they’ve worked through adversity all year long and I can not be more proud of how tough our players are at Coppell High School,” Coppell coach Ryan Howard said. “We’re mentally tough and physically tough but it, unfortunately, didn’t go our way but that’s baseball and I couldn’t be more proud of the guys. Our guys are going to remember this taste [of defeat] because it is not a good feeling when you get beat like this and when the going gets tough, the guys can revert back to this.”

Coming into the game with their backs on the wall, the Cowboys knew that the pressure was on them to keep their season alive. Coupled with the added pressure was staring down the barrel of a 4-0 deficit early in the second inning.

Still, the familiar “Cowboy Fight Never Dies” adage murmured throughout the Cowboy dugout, setting the stage for a thrilling comeback for Coppell.

Despite Keller controlling most of the game early on, particularly with a three-run homer in the top of the second inning, Coppell fought its way onto the scoreboard and back into this game by scratching runs across in the bottom of the second and fourth innings, cutting the deficit to 4-2.

Keller responded by adding another run in the top of the sixth before the Cowboys took over from there.

The Cowboys started the winning rally with junior third baseman Walker Polk’s one-out RBI single to cut the Keller lead to 5-3, setting the stage for senior first baseman David Jeon to take the lead by crushing a fastball over left field to provide the game winner.

“I just tried to stay composed, I told myself that this was just another at-bat and just another game and I was trying to see a fastball because I know that’s what [Keller senior reliever Ryan Smith] was throwing so I was just preparing myself for the at bat moment,” Jeon said. “I just wanted to help my team out however I could and, fortunately, it went over the fence.”

Coppell senior pitcher Will Rodman earned the win for the Cowboys, surrendering four hits over five innings and striking out one. Keller senior pitcher Robert Cranz started off for the Indians, allowing two runs on one hit and five strikeouts in four and one third-innings while Smith surrendered the four runs in one and two-third innings.

“I feel more proud of our players for how they were able to keep level headed and compete for all seven innings despite some of the theatrics that went on,” Coppell coach Ryan Howard said. “David came up huge for us and I couldn’t be more happy for him.”

Coppell came into this game knowing that it’d be facing one of the top pitchers in the state in Keller senior pitcher and USC signee Eric Hammond and, even so, the Cowboys took the bull by the horn to race out into the lead.

Despite leading for the majority of six innings, the Cowboys were not able to walk out of the game with a win due to Keller’s two late game homers to sneak the win away from Coppell.

Coppell took the lead early with senior left fielder Ryan Walker’s solo homer in the top of the third and scratched another run across off a throwing error to score sophomore shortstop TJ Pompey in the top of the fifth.

“Getting up on them early is always good, it gives our guys a boost of confidence and we know that we can play with those guys,” Coppell coach Ryan Howard said.

The Cowboys’ lead would last three batters into the bottom of the sixth, where Keller senior second baseman Aidan Connors would rifle a one-out, two-run homer to right field to knot the game for the Indians.

The following two Indians got on base off a hit and a throwing error, allowing senior center fielder Braden Davis to drive in both with a three-run homer to right field, taking the 5-2 lead in the process.

“We won the game the entire time except for that one inning that got away from us,” Coppell senior pitcher Tim Malone said. “They took advantage of some pitches I left up and things that didn’t go our way so that’s why we have to play a complete seven [innings].”

Hammond pitched into the seventh as the Cowboys’ didn’t go down without a fight, using a walk and hit batter to put runners on bases with two outs. Coppell senior first baseman Chayton Krauss, however, was unable to convert after being flied out to right field, ending the game.

“Keller has been this good because they stay in each game with their pitching and they’re going scratch runs and crawl away [by taking advantage of our mistakes],” Malone said. “It’s just the way baseball goes, they got some hits when we didn’t. It’s a series for a reason and no team is going to sweep us.”

“When you get to this point in the playoffs, teams are going to take advantage of mistakes and a lot of the time, the team that makes the least amount of mistakes usually wins the ball game ,” Howard said. “We played a pretty clean game all the way around with a couple uncharacteristic mishaps but we’ll bounce back, we’re a better team than the mistakes we had tonight.”