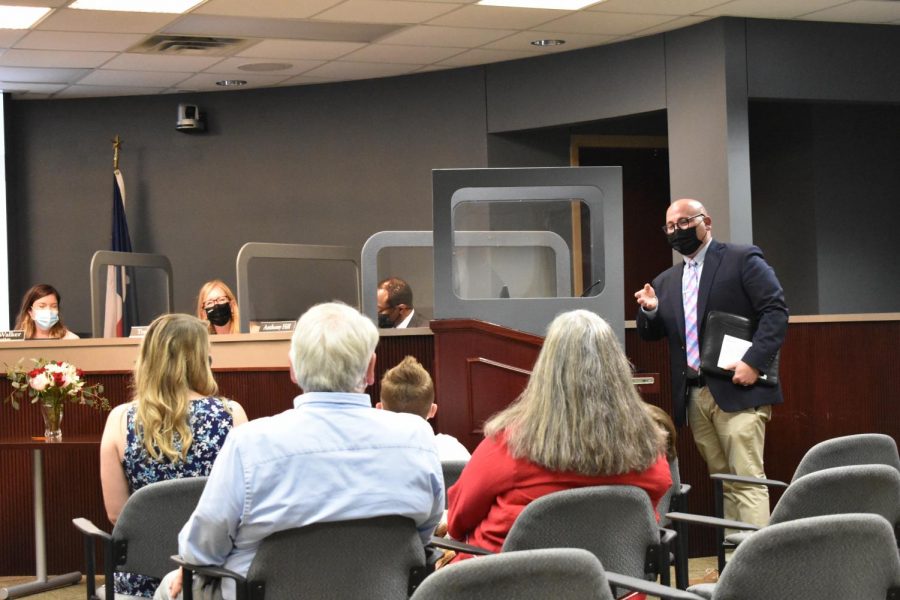 Coppell Middle School West assistant principal Joseph Smith is approved as the new principal of New Tech High @ Coppell at the Board of Trustees meeting on Monday. Smith expressed his appreciation for the board’s approval and introduced his family in the audience.

On Monday evening, the Coppell ISD Board of Trustees named Joseph Smith as the new principal of New Tech @ Coppell High School.

Smith is an assistant principal at Coppell Middle School West and replaces Dr. Steffany Batik, who is leaving for a position with New Tech Network.

“I look forward to get to know all of our staff and learners,” Smith said. “As well as meeting some Westie learners who I already know. I’m incredibly excited to begin this journey, and my six years in Coppell ISD have been the best of my life. I love this district with all of my heart, and I’m so grateful to be given the opportunity to continue my journey in such an innovative and unique learning environment.”

CISD athletic director Kit Pehl reported on the successes of the CISD athletics program, including the successes of teams at UIL and the connection between the academic success of the 2, 424 CISD athletes and their participation in sports. Fine arts coordinator Gerry Miller reported on similar statistics for the CISD fine arts program, with a long list of the colleges fine arts students have had a higher likelihood of acceptance to.

There was also a report on advertising and communications projects in the district by executive director of communications and community engagement Angela Brown. She announced a project for a new video scoreboard at Coppell High School’s Buddy Echols Field, in partnership with One Vision Media.

In her legislative report, Trustee Tracy Fisher described new bills up for passage. One such bill she mentioned was House Bill 3979, which limits public school curriculum in regards to U.S. history. Specifically, students cannot be taught about current events or receive class credit for any kind of political activism.

“I know many of our social studies educators are very concerned about this bill,” Fisher said. “Typically the legislature doesn’t get involved with school curriculum to this detail – that is the job of the state board of education, where they take input from professional educators and experts, and take extensive input from the public.”

The bill was passed by the Senate with amendments and now returns to the House for acceptance. Should it be accepted, it would go to the governor. If not, the bill would be sent to a joint House-Senate committee, where it would either be sent to the governor or fail.