Team awaits Prosper in Class 6A Region I quarterfinals 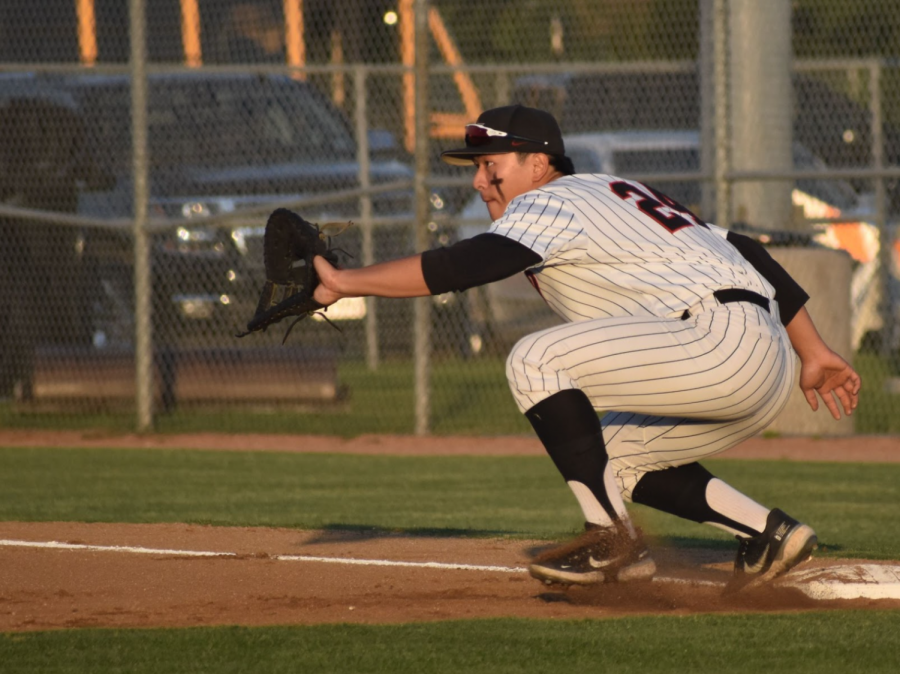 Hundreds of fans gathered under the warm glow of the ballpark lights to watch as the Coppell baseball team was put to the test as it faced state-ranked Jesuit.

The Cowboys played Jesuit on Thursday, at Wright Field in Dallas, and Friday, at the Coppell ISD Baseball/Softball Complex. In Game 1, Coppell snapped Jesuit’s 18-game win streak with a 2-0 win, before ending the team’s season in Game 2, defeating Jesuit, 7-4, in the Class 6A Region I area playoffs.

With these wins, the Cowboys advance to the Class 6A Region I quarterfinals, facing Prosper with game times TBD.

At a pitch count of 1-1, Coppell junior third baseman Walker Polk barreled the ball out of the park in Game 2 on Friday night..

“The game is never over until it’s over,” Coppell senior left fielder Ryan Walker said. “One hit can change the momentum of the whole game.”

The Cowboys were yet to score until the third quarter after a single by Polk, which earned him two RBI and cut the Jesuit lead to 3-2.

“We’re confident in our abilities but we do also understand that we can’t give away gifts at this level and against the message is to keep playing all the time, that’s part of our culture, we are not going to quit,” Howard said. “We gave some gifts early in the first inning when they got the two runs but there’s still a lot of baseball to be played and we know what we’re capable of doing, we’re confident in the team that we’re playing because they’re going to take advantage of them.”

Polk’s home run gave Coppell a needed confidence boost, defending the plate before tying the score in the bottom of the sixth.

With its top pitchers out for Game 2, senior pitcher Timothy Malone made his first playoff appearance as Coppell’s starting pitcher.

“Malone came out and did exactly what we wanted him to do,” Coppell coach Ryan Howard said. “He kept us in a ball game, he attacked the strength zone, he competed as much as we could ask him to compete against a top ranked team in the state of Texas. It’s never easy to come out and get a start after you’ve gone a few weeks without one and that’s just the nature of high school baseball.”

As Malone warmed up in the top of the first, Jesuit’s bats were hot as it prepared to prove itself as a top five team in the state, setting the score at 2-0 before the Cowboys had a chance to bat.

Jesuit bounced back with a home run at the top of the seventh, but Coppell junior pitcher Will Boylan quickly closed out the game.

“It’s awesome knowing we can beat anybody in the state but we’re going to stay level headed and treat every opponent like the same,” Walker said. “We’ve had to play every game like a playoff game since our district is so good, we got to face some of the best competition in the state day in and day out and it’s really prepared us for tough playoff games and hopefully it’ll carry us a pretty long way.”

DALLAS – With senior pitcher Will Rodman on the mound, throwing 88 pitches (compared to Jesuit’s 103 in the first five innings alone) and allowing a total of four hits and zero runs, the Cowboys needed to focus on one thing: getting on the board.

“Rodman is a mature player, he’s a senior and has been through this before,” Coppell coach Ryan Howard said. “He’s mature and confident, he knows that when he executes his pitches and it’s tough to hit. He’s going to challenge guys and that’s part of our culture,

we’re going to come after you and force you to beat us.”

Ryan Walker has been a great player all year,” Rodman said. “He got a solid pitch, put a good swing on it and the results [followed]. He hasn’t been as hot as usual but he stepped up tonight which was huge for us.”

The score held until the top of the seventh, until a RBI by Coppell junior catcher Bradley Castillo.

The Cowboys placed its faith in Rodman in the home-stretch. Rodman finished the game with a final strike against Jesuit, which gave way to a roaring crowd.