There is ethical consumption under capitalism 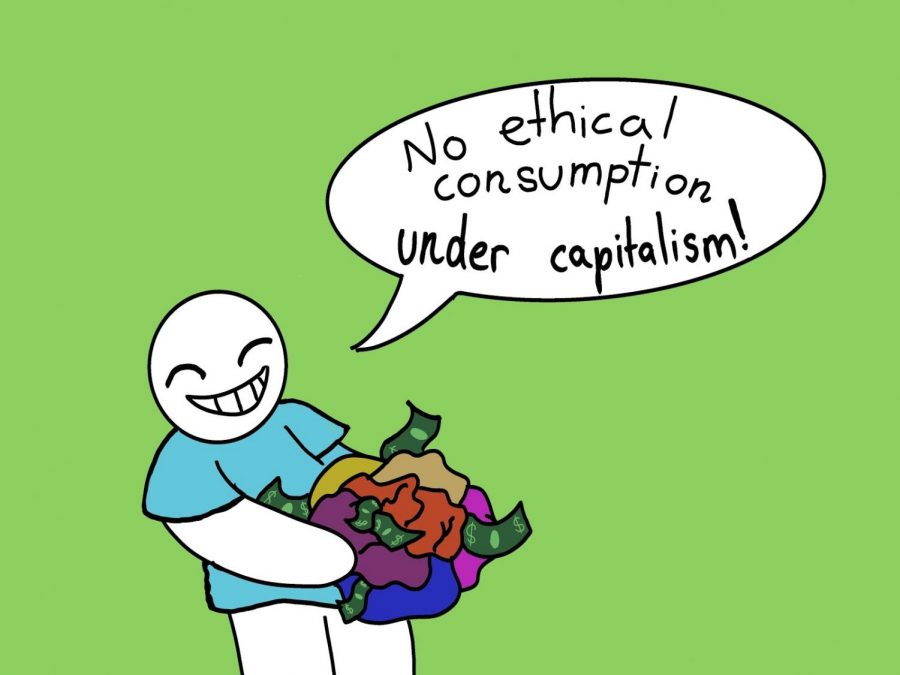 A common saying when referring to the purchase of products in “No ethical consumption under capitalism.” The Sidekick sports editor Anjali Krishna expands on what is truly ethical in the world of capitalism.

In a place I go to dodge my other responsibilities, a place I consider a safe haven and a place that often hides me as well as I hide my addiction to it, the phrase “no ethical consumption under capitalism” endlessly irks me, forcing me back to the real world and my own ragingly political mind.

Shein hauls. Zara hauls. Romwe hauls. Pretty Little Thing hauls. There inevitably also exists outrage in comment sections under these videos on the purchase of goods created using child labor. Outrage at unfair wages. Outrage at the gall of the middle class to spend $500 on clothes that will fall apart or go out of style within days. Then comes the phrase; the cursed, cursed phrase.

Arguing with those who call for smarter choices and low levels of consumption inspires the coming of newly minted social rights activists who have just discovered that if the world’s issues are attributed fully to a financial system we have little power against, it leaves them free of responsibility and morality altogether.

The phrase implies that faced with terrible circumstances and terrible options, we should surrender and take the worst option available to us. With fashion trends emerging and dying faster than ever thanks to social media, buying fast fashion – clothing which is made cheaply by underpaid and badly treated workers – oftentimes the easiest option.

Rather than attempting to use relative privilege and resources to spend more money on less clothing that lasts longer and is of better quality, many see buying trendy clothes frequently for cheaper prices as a viable option. In defense of purchasing more clothing at cheaper prices is blame placed on capitalism.

Now, capitalism can be blamed for many of the world’s problems; I don’t approve of the system that has allowed laborers to be placed in unfavorable positions in the first place. But removing the world’s capitalist system and the natural human greed that spurred the creation of such a system is a much larger discussion than one warranted by shopping, and it does mean that in the meantime, we have a responsibility to shop as consciously as we can.

Yes, capitalism is the system that created this situation. But does that mean we should make decisions that we know for a fact further support the corporations that do this?

We have been desensitized to the fact that most of our clothing and goods are created by children who spend their days working in a factory for wages that could not be considered livable. And if not children, human beings working in atrocious conditions to keep up with our microtrends, whims and fancies. We should put as little support to the capitalistic system that promotes such mistreatment and inequality as we can.

It’s simple: when we have the option to shop better, we should.

Buying low quality clothing is not the problem. The issue lies in how easy it is to over consume fast fashion, made ridiculously cheap with endlessly changing styles and trends. It only makes it easier to justify a few hundred dollars spent for so many pieces. But with more expensive, longer-lasting clothing, it’s hard to over consume. When there are no cheap alternatives for those who cannot afford to spend money on clothing, buying a few things from a fast fashion or non-ethically made business is not a problem. This is not not ethical. But for those in the possession of hundreds of dollars to spend on clothing, there is no justification.

Companies focused on making trendy clothing ethically are often unable to provide some options – like plus sizes. More ethically made clothing is often out of style and date, and buying the readily available plus sized clothing when no other options are available is still reasonable.

Those using “no ethical consumption under capitalism” aren’t looking for a world financial upheaval; they’re looking for an excuse to justify their ease at making the least ethically and morally sound decisions possible.