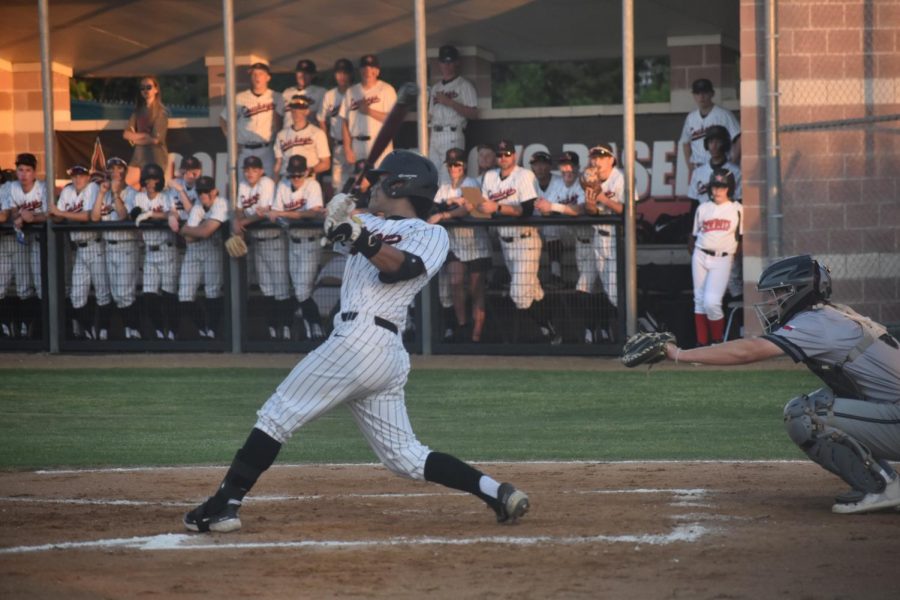 Coppell sophomore catcher Bradley Castillo bats against Denton Guyer on May 7 at Guyer HS. Coppell faces Dallas Jesuit in a Class 6A Region I area best-of-three series with Game 1 tomorrow at Jesuit and Game 2 Friday at the Coppell ISD Baseball/Softball Complex, first pitch at 7:30 p.m., andFame 3, if necessary Saturday at Lake Dallas High School, at 1 p.m.

After a season full of twists and turns, the Coppell baseball team hit the ground running in its bi-district playoff games against Denton Guyer where it swept the Wildcats, 2-0 in Game 1 and 8-4 in Game 2.

The Cowboys look to feed off this momentum as it approaches the Class 6A Region I area playoffs, facing notorious Dallas Jesuit College Preparatory. In the best-of-three series, Game 1 is Games will be held tomorrow at Jesuit and Game 2 is Friday at the Coppell ISD Baseball/Softball Complex, first pitch at 7:30 p.m. and an if needed game If necessary, Game 3 is Saturday at Lake Dallas High School, first pitch at 1 p.m.

Jesuit has a strong lineup with an abundance of strong arms, pitchers and a potential top 5 MLB draft pick. Of Jesuit’s lineup, one player in particular stands out: Jesuit shortstop Jordan Lawlar.

Lawlar is currently ranked as the second draft pick overall and No. 1 high school prospect in the draft. He has hit  five home runs this season alone, played varsity since his sophomore year and is currently committed to Vanderbilt – one of the top baseball programs in the country.

“He’s got all the tools and is really good defensively,” Coppell senior first baseman David Jeon said. “[Lawler’s] fast, has a good arm and can hit. He’ll be one of the main guys we’re going to have to focus on getting out but we trust our pitchers to hit their spots and our defense to make plays whenever [Lawler’s] up.”

Jesuit faced Arlington in it’s bi-district series with scores of 14-1 (in seven innings during Game 1) and 14-0 (in four innings during Game 2). During game 2 Lawlar was only allowed to hit in one of his three at bats, where he nearly hit a home run as he gained an RBI.

“It’s DFW baseball in playoffs; every team we play is going to be good,” Coppell coach Ryan Howard said. “They’re going to be very talented and play hard. They’re confident. I like our chances and our guys and I can’t wait to see who we end up playing.”

Coppell brings its own top players to the series. Coppell senior pitcher Will Rodman received an honorable mention for High School Baseball Player of the Week (5/9) for his pitching against Guyer.

“It gives us and Rodman a sense of confidence,” Jeon said. “Even with Krauss as our ace pitcher, knowing Rodman was mentioned shows that we have faith in both of our pitchers to go out and do a great job.”

The Cowboys are looking forward to an intense series against Jesuit and prepared as they always have: hitting and having fun.

“We’re trying to stay in our routine,” Jeon said. “We’re keeping ourselves loose, having fun in practice and working on the little things to make sure we stay sharp.”