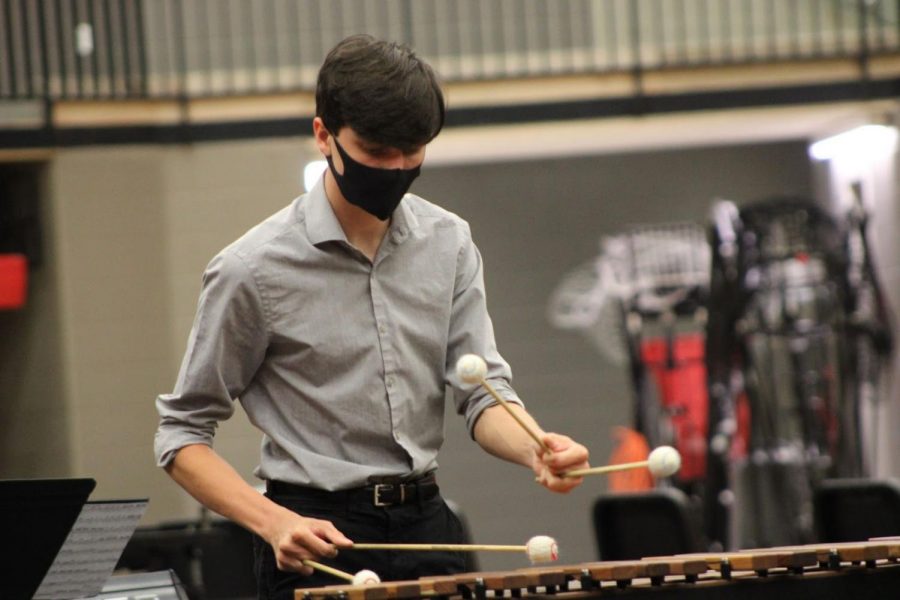 Coppell High School Junior, Mario Torres Ramos plays a solo original performance named “Rapture” at the CHS Area on Saturday evening through the Purely Rhythmic Percussion Concert. The money raised at the Purely Rhythmic Percussion Concert will allow the team to travel to Indianapolis, where they were invited to perform in the Percussive Arts Society International Convention (PASIC) from Nov. 10-13. Photo by Nandini P.

On Saturday the Coppell High School percussion students played their annual Purely Rhythmic Percussion Concert at the CHS Arena. The location was moved to the CHS Arena from The Sound at Cypress Waters Saturday afternoon due to windy conditions.

“It was amazing. We were here this morning and we packed everything you see on the floor on trucks and in our cars, and brought it to The Sound,”  Edna Ramos, mother of Coppell High School sophomore Mario Torres Ramos, said. “At some point, you saw the kids playing, but when the piece ended, a lot of other kids stood and they were hiding under [and holding] the music stands and the papers.”

During the performance, the Purely Rhythmic Silent Auction was accepting donations. All donations benefit the percussion program in travel to Indianapolis for Percussive Arts Society National Convention (PASIC) from Nov. 10-13.

“We [were] looking forward to providing live music to an audience that has not seen much live music over the last year,” CHS associate director of bands Annie Chernow said.

Three CHS percussion members, Nivi Anadaraj, Mario Torres Ramos and Arr. Akanksha Subbarao composed their own work which was performed at the concert. Torres played his own piece, “Rapture” as a solo.

“It felt really great. I had it performance-level maybe a week before [the concert], so when Mrs. Chernow asked me to perform it at the concert, I said yes, and it turned out pretty well,” Mario Torres Ramos said. “I really appreciated the applause.”

The event began with a performance by the Austin Elementary School Marimba Band and after 13 pieces, there was a 15–minute intermission before the final 10 pieces.

“It’s every day that they stay after school for rehearsals and practice,” Edna Ramos said. “This is the concert that we always look forward to every year.”

The audience gave a standing ovation after the final piece, “Beethoven in Havana.”

After the intermission, Chernow and the eight percussion senior students stood at the front of the court in the arena. The seniors spoke of their graduation plans.

“This has been a wonderful way for [Coppell percussion students] to have some normalcy during this so crazy year that we’ve had,” Edna Ramos said. “This is a lifesaver for many of them, who otherwise would have been cooped up at home. It just gave them so much to do and doing it with their friends meant a lot.”