Bellubbi, Cole doubled up for life 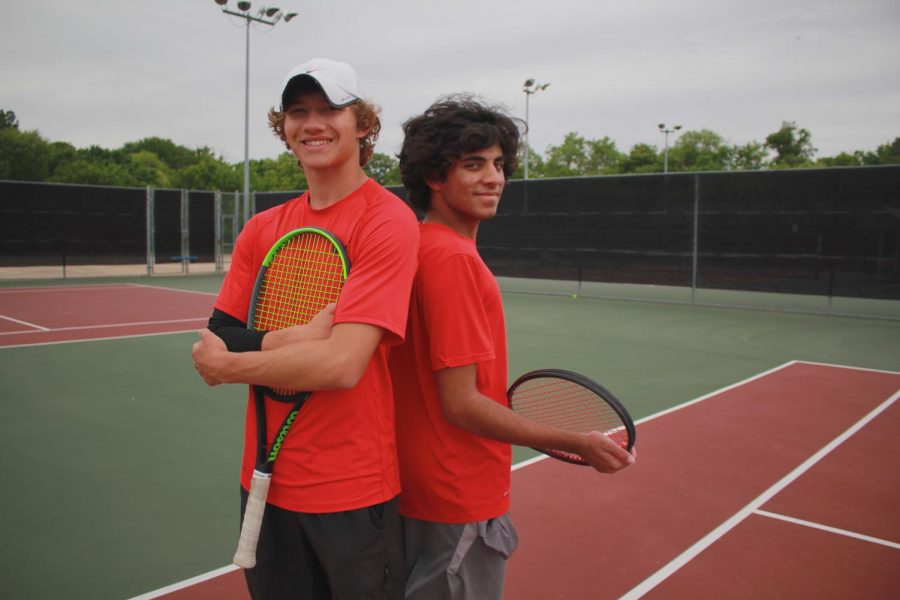 Coppell High School junior Siddarth Bellubbi and New Tech High @ Coppell junior Cason Cole have been friends since elementary school and doubles partners for 11 years. The pair did taekwondo together before transitioning into playing tennis.

In the intense gap of sound the tennis ball makes before bouncing off another racket and bonding over Roger Federer as their role model, the friendship of Coppell junior Sid Bellubbi and New Tech @ Coppell junior Cason Cole strengthened.

Bellubbi’s and Cole’s friendship began in kindergarten at Lakeside elementary when they took taekwondo together at NTA Taekwondo in Grapevine. Cole then started his tennis career in third grade at Brookhaven Country Club. By the time fifth grade rolled around, Cole had inspired Bellubbi to join tennis. During their sophomore year, Cole advanced to varsity and Bellubbi remained in JV.

“The hardest moment in my tennis career was trying to make it into varsity my sophomore year,” Bellubbi said. “I was very close, and I missed it by one spot, which was mentally challenging. At first I was down, but I had a ton of great people around me who helped support me and help me push through. You can’t really control the events in your life, but you can control your response.”

In addition to the 90 minutes of daily practice during his tennis period and five hour tournaments on weekends, Bellubbi began to practice an extra two hours every day.

“Sid is very hardworking and persistent,” Cole said. “We push each other to get better every day. When he gets ahead of me, I get inspired to keep up or get ahead of him. I try to work as hard as I can.”

According to Bellubi, tennis is not just a physical sport; it also requires great mental fortitude. Even if one is a talented player, they can let a bad stroke throw off their game and shake their confidence of winning if not mentally prepared.

“I pride myself on being hard working, and being on varsity is a reminder that I worked hard to get there,” Bellubbi said. “I struggled with the mental aspect, and once I saw different ways I could conquer it, I overcame it.”

Balancing friendship and competition can be difficult even for friends who have known each other since kindergarten. Once after a match, the two did not talk until the next day. However, they realized tennis brings them together and bonds them more than it divides them.

According to Coppell coach Rich Foster, Bellubbi and Cole have grown through an increase of confidence. While Cole did make varsity, he was not necessarily where he wanted to be on the team because he didn’t get as much playing time, but stayed patient and will be one of the leaders in senior year. Bellubbi did not attain the goal he wanted at first, but he never gave up and worked harder to make varsity his junior year.

“I often refer to the tennis program as a family,” Foster said. “There are intense competitors who want to beat their opponent on the court, but at the end of the day, they walk off the court being friends with each other. [Cole and Bellubbi] having a long relationship inspires them in a competitive way to try to outdo each other, but in a loving way.”