Libraries and advertising and band, oh my! 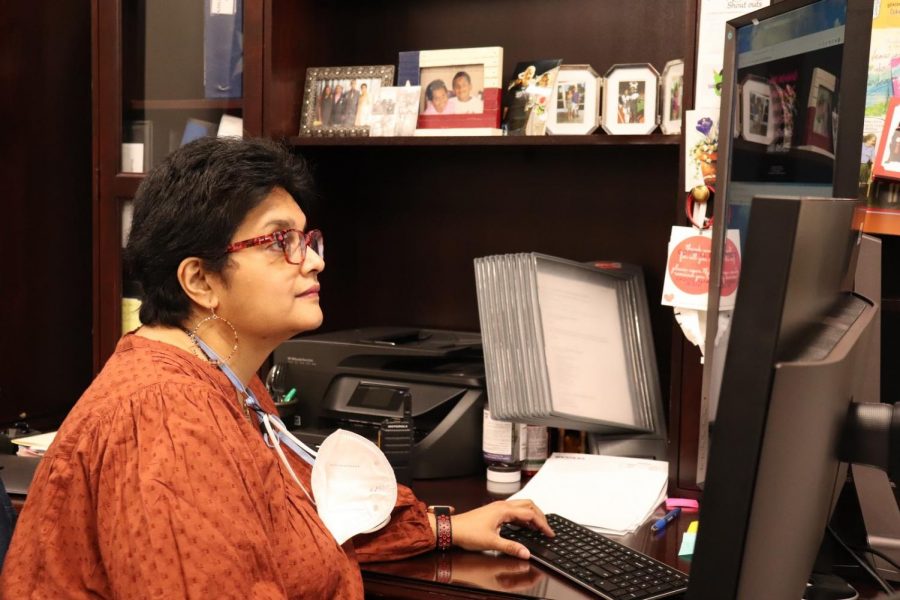 Coppell High School administrative assistant to the associate principal Veena Bhat works in her office on March 22. Bhat has worked as a library assistant and substitute teacher in the educational field, as well as with advertising for Gulf Air and American Airlines prior to her current position.

When the world seemed to come to a halt three-fourths of the way into last school year, the silence at Coppell High School was deafening. As a woman often surrounded by sound – of students, of fellow faculty, of musical instruments – CHS administrative assistant to the associate principal Veena Bhat describes that period as the hardest moment in her time in Coppell ISD.

“This building, which is always so full of life, was just dead; there were no voices,” Bhat said. “The halls were empty. One of the best things, just before we went to the pandemic, was our building was under construction, and the band hall especially was under construction. Those kids transitioned into our auditorium, so we had music playing outside our offices all day. We [heard] flutes and trumpets and drums and percussion, and there was so much life in this building at that point just before we left.”

For Bhat, the band holds more than the last vivid memories of a lively school. It is one of the many subsections of CHS which she has immersed herself in. As mother to two former band students, 2018 CHS graduate Mihir Chadaga and 2019 graduate Mallika Chadaga, Bhat found a role as a booster member.

“When you’re a band mom, it’s all hands on deck,” Bhat said. “You show up for everything; you’re part of everything; you’re cheering the loudest; and as embarrassed as my kids were at that point, I think they just really enjoyed the fact that I showed up to their events.”

In addition, Bhat serves as an administrative assistant to the fine arts, which means she actively aids the band despite her children having graduated.

“What makes her so invaluable is that she’ll send me a note and say like, ‘Hey, isn’t this coming up, don’t we need to begin?,’” Coppell Band director Gerry Miller said. “With all that’s going on, to have somebody who’s like, ‘Hey, I’ll take care of getting the buses there, itineraries for the day or make sure the purchase orders on the music we buy gets received and filed properly’ and all that, and she’s just so very good and so kind about all of that.”

Bhat has also worked as a substitute teacher at Denton Creek Elementary and as a CHS Library assistant. Prior to her experience in the education field, however, she lived “a former life” in various other positions. With a Bachelor of Arts from Bangalore University in India in economics, sociology and psychology, as well as a Bachelor of Applied Arts and Sciences from the University of North Texas in journalism and anthropology and a Master’s in advertising from the University of Illinois at Urbana-Champaign, Bhat saw herself working in advertising with American Airlines and Gulf Air.

“I am a people person; my heart is with the kids,” Bhat said. “While advertising was gray – you sort of did the same thing, you know there was always panic and pandemonium because you were trying to sell something to somebody that didn’t really want it – over here, the challenges are different. There’s a way to give back a way to support people around me, and it’s a great way to lift everybody around me and myself at the same time. That’s why I love the position I’m in.”

Bhat was born and raised in India, spending time in Bahrain (a Middle Eastern country) prior to moving to the United States. With this knowledge, she is able to connect with others based on shared experiences.

“I love the fact that she is from Asian culture, and she understands that so much better than I do,” Coppell High School Principal Laura Springer said. “There are some times I call her in and say, ‘OK Veena, come in here. We’re getting ready to do Ramadan, I need to know more about it, talk me through it, tell me what our kids are going to go through, tell me what we need to look out for.’ She’s just so phenomenal at training me to be a better principal.”

Though the halls of CHS are still somewhat lacking the noise she is used to, Bhat is able to continue building the relationships she has established on campus as an aid to many and friend to many more.

“Veena Bhat is probably one of the most amazing people I have met in my life,” Springer said. “She is a breath of fresh air to me every single day.”