I close my eyes in order to see 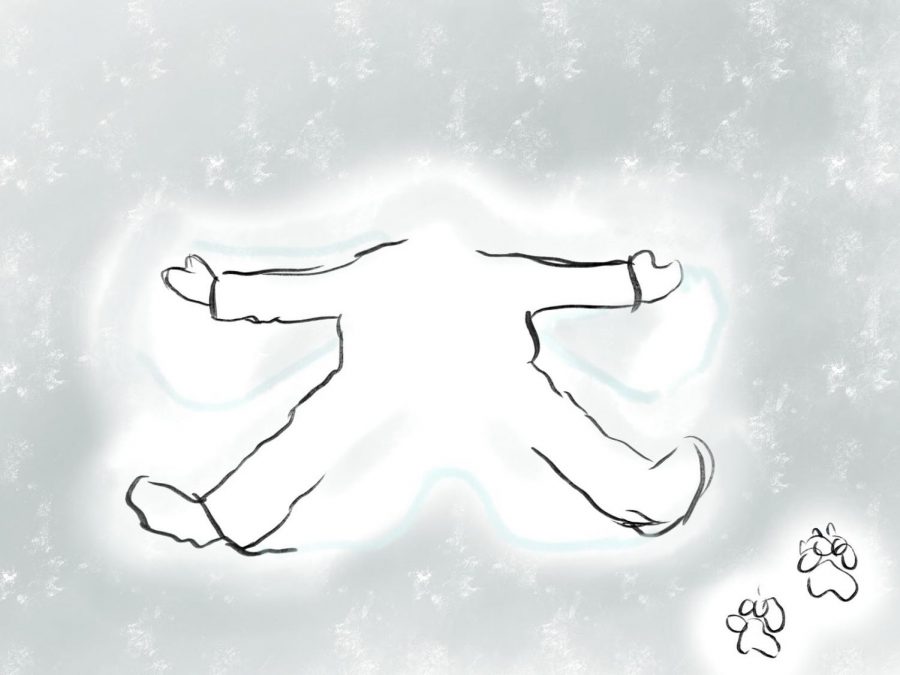 Many people become caught in the cycle of constantly working and rushing through life. The Sidekick executive editor-in-chief Sally Parampottil conveys how people should take time to step back and exist in the present.

On Feb. 14, the day before the historic winter storm sparked power outages across the state, I laid on my back in the snow in my front yard, stared up at the sky and watched the flakes fall.

Supine beneath a tree with bare branches, I could see its dark limb extend over me with a gray backdrop of clouds further up in the heavens. The snow’s rarity in the area meant I had forgotten just how silent it falls. Apart from the wind, which I was fortunate enough to avoid at the time I went out, there was no sound.

It was quiet, and I could think.

Only moments into my escape from the hustle and bustle of my everyday life did my brain start playing the opening song of The Hunchback of Notre Dame musical. I would normally appreciate the collective voices of the Latin choir, but I chose instead to shoo away my intruding backtrack. Silence took hold of my head once more before my thoughts inevitably trailed to Sidekick.

Four days prior, I had signed up for my last assignment to cover a Coppell High School sporting event. It will be sometime in April, taking photos of a softball game. The prospect of finishing coverage in its entirety – last time in high school, on this newspaper staff and quite possibly for the rest of my life – had gripped my heart in a mixture of nerves and nostalgia.

The phrase “only one more” is seen as a threat with every rising degree of finality. My mind perceives it with pressure to get each task done right, to make each experience memorable, to do everything necessary and more. This semester continues onwards, and my Sidekick bucket list is shortening by the week. The echoes of “only one more” ring in my head nonstop; only one more night out there covering, one more interview left to conduct, one more story to write and publish; it’s all coming at some point. Once it happens, it’s done.

I need to adjust my perception of a threat to a recognition of an opportunity. To see it as a chance, not a looming set of standards I had best meet or else. If I were better at taking my own advice, I would have changed my mindset already to match this, but my realism tells me it will take a bit of time before it really sets in.

My sight blurred at the accumulation of snowflakes gathering on my eyelashes. I closed my eyes momentarily as I drew even further into my own thoughts.

I was getting old, wasn’t I? Instead of waging frozen war on my younger sisters, I had settled for hurling a single snowball at each of them. You experience a pandemic, landmark election and the worst winter weather the entire state has experienced in who knows how long, and suddenly, you feel like you’ve lived five lifetimes.

I’m not really that old. I know I’m not. There are so many things I don’t understand yet, so many emotions I still can’t process. A month ago, I learned someone I had briefly known had died. I didn’t know how to feel or what to think, and I ended up being numb with the knowledge that I had a dead man’s phone number with a log of texts I dare not ever read again.

I’ll have to deal with it eventually. People closer to me will pass, and I will have to learn how to grieve and mourn and cope. The good thing is, at the very least, I don’t need to know how to go through it beforehand. Experience can be my teacher, both for handling death and handling the rest of life and adulthood.

The snow was nice. The quiet was nice. In the jumbled mess of my head, where over explanations and convoluted descriptions make even my internal monologues louder than need be, it was nice to have a moment to look inwards.

My progress check was interrupted, naturally, by my 9-month-old toy Australian Shepherd, Lucy, tumbling into me, sniffing urgently to make sure I hadn’t collapsed during her first real snow day. I reentered reality, and the sounds of life began gracing my ears once more.

More aware of myself – physically, mentally, emotionally – I stood up, shook off the snow and carried on.