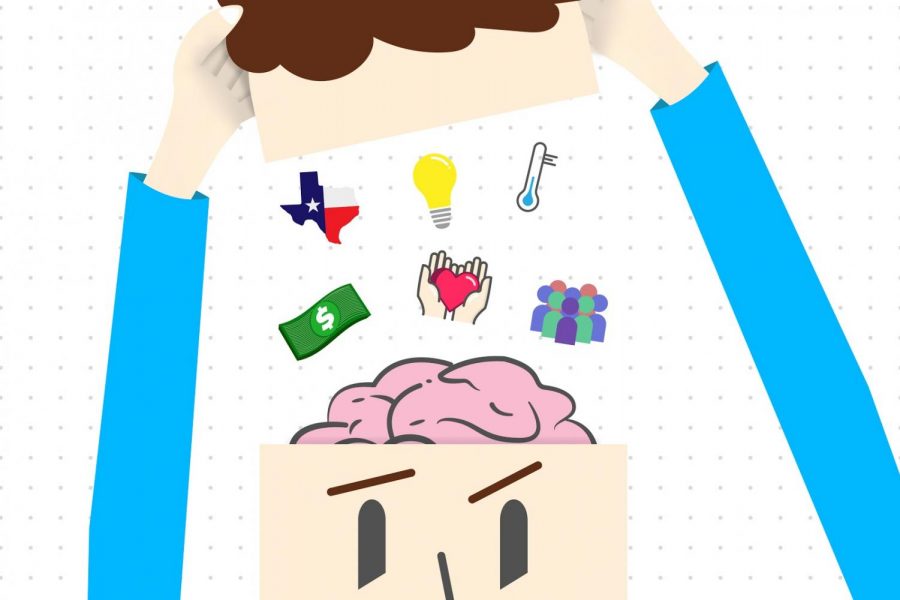 The winter storm that hit Texas from Feb. 13-17 caused a lot of damage throughout a state not prepared for such severe weather. People within the state and around the country have been empathetic towards those affected and offered shelter in order to help.

As numerous Coppell residents huddled under layers of blankets, it was easy to focus only on the moments they were living right then. The lack of power,  risk of burst pipes, inability to travel on snow-covered roads – all narrowing our thoughts down to just how to escape a week of winter weather in a state ill-prepared for it.

When each household’s lost power saw its return, this time to stay, those thoughts settled on finally moving past the historic Feb. 13-17 winter storm. Move on we shall; though with us, we will take lessons that transcend the basics of snow survival.

Yes, we learned to keep our taps running to prevent plumbing damage, but more than that, we gained a newfound understanding of empathy, respect and value for the things we took for granted.

As people experienced a cascade of tragedy, such as property damage and lack of supplies, the southern hospitality we take so much pride in was in abundance. Offers of shelter and resources were extended, as people temporarily pushed aside their concerns of COVID to aid their fellow Texans. Places like the CORE in Coppell opened its doors for families, providing restrooms, charging stations and something often taken for granted in this state: heat.

The kindness wasn’t limited to a community effort. Though underlying politics ran rampant on social media, when it came to the reality of our actions, there were multiple examples of our hearts opening for those who needed help. Combating the negativity online was a surge of people up north who offered advice to get through the worst of the cold and prevent any more damage from occurring. Donations of supplies to multiple relief organizations (such as local food banks) and fundraising through online platforms (such as GoFundMe) showed the generous side of people when it came to their money – though the entire ordeal also revealed how profiting off of others’ suffering has engraved a place within even prominent positions, like our power grid, and must be rectified.

Apathy was washed with the waves of empathy Texans experienced from each other and from many others across the nation; we cannot lose that feeling moving forward into whatever the future holds for us.

We cannot lose our kindness towards either communities who experience another intense snowfall, extreme heatwave or other natural slap in the face, especially now that we’ve lived through trying times of our own. We cannot lose the value we learned electricity, food and water possess, especially when it comes to those who still have limited access to all three due to poverty or poor infrastructure. We cannot lose the appreciation we have for the occupations in the maintenance sector, especially after plumbers, handymen and electricians answered calls around the state to do the jobs unable to be done by home residents themselves.

We must retain what fueled us in the moments when state pride was pushed to the side as Mother Nature battered us down and arms of support were extended to lift us back up, helping without hesitation.

Apart from our attitude towards our fellow man, in that week, we found the importance of being prepared and drilling in the necessity of learning how to do household tasks without the comforts of technology. Just over a hundred years ago, power was a privilege and was not accessible to the whole population as it is now; this storm has sparked a realization that though we may be blessed with advancements, we always run the risk of losing it. Our infrastructure was not built for such extremities, and we need to be prepared for the next time it happens, whether it be through more available resources to stock up on (such as road salt and preservable foods) or offering classes on basic survival skills (such as cooking without appliances or how to start a fire).

Now that we’ve lived through this, we cannot forget it. While it is tempting to ignore, to push away, to suppress the days of fear and destruction, the knowledge gained that goes beyond just freak winter weather needs to remain an active part of how we think and act moving forward; that’s how we embark on the road to a better tomorrow.

The vividness of the winter storm experience grows more numb with each passing day until it exists as only a loose memory, a single week in the course of our lives. However, what must remain with us are the lessons we learned to ensure each future trial and tribulation is met with the fierce Texas mentality we so proudly boast.