One small step for women, one giant leap for women in sports 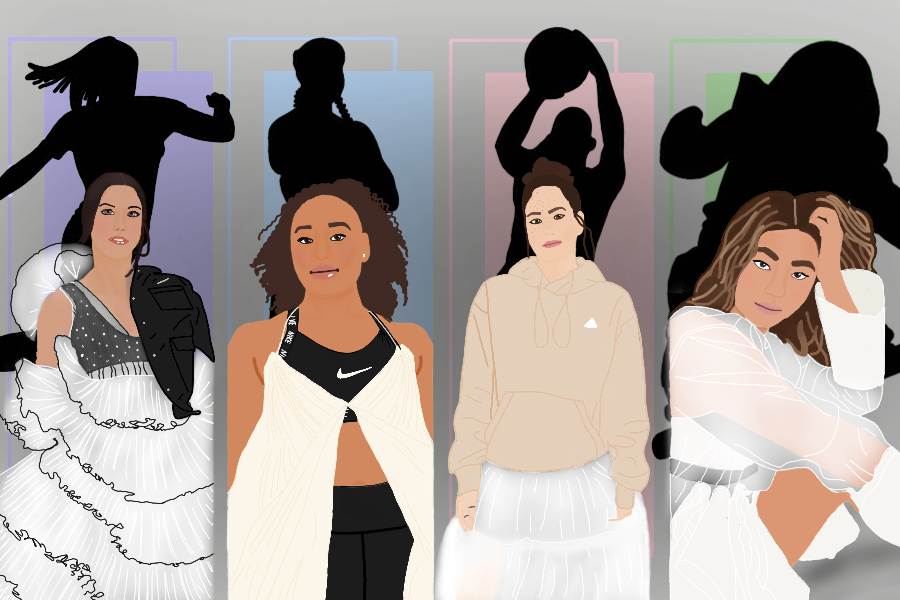 On March 2, Olympians Alex Morgan, Simone Manuel, Chloe Kim and Sue Bird announced the launch of their new brand: TOGETHXR. The Sidekick executive editor-in-chief Sally Parampottil writes about their goal to promote more female athletic representation and how this brand and similar organizations are huge steps of progress for women in sports.

According to UNESCO, that’s the approximate amount of media coverage for women’s sports.

Though seemingly small now, this is a major step in the right direction for bridging the divide between female and male treatment in the world of sports.

“Each one of them has traveled the road of being treated less, that ‘because they’re a woman, they’re really not an athlete, they’re just somebody that’s taking their time up playing a sport,’” said Coppell High School Principal Laura Springer, who holds a background of coaching and playing sports. “For them to represent and especially being champions of their sports, I’m just so thankful we have young women stepping up.”

Even these Olympians, elite athletes and history-makers for their gender, are aware of the inequality to the point of taking action. This initiative to create space for female representation means lesser known women are being spotlighted across a multitude of sports through TOGETHXR’s professional storytelling.

Media coverage is not the only area in which women’s sports are lacking. The UK-based organization Sporting Her, which also launched in early March, tackles the financial side of supporting women, such as finding sponsorships for teams, in addition to media exposure.

“When I was working for [a sports commercial agency], I just wrote a tweet just asking if there were any clubs in need of sponsorship in the women’s game, and I had so many responses,” Sporting Her CEO Jessica Blissett said. “That shocked me. I didn’t expect so many women’s teams to need sponsorship, especially at the league level I was asking about; it was the National League, which is the third tier women’s football here in the UK, and I had a lot of responses. It was actually that tweet that made me want to start  my own agency and focus on women in sport, to help them commercially.”

Both organizations spark a chain reaction of various groups benefiting. As more women are given media exposure, the more an audience can consume and support the content. Mainstream media, which seems to find women’s sports not-as-profitable, inferior or some combination of the two, will eventually recognize the growing support for women’s sports coverage, and become more likely to promote the stories as well. Journalism is an industry, after all. The media reports what people will buy; a growing following around women-centered sports journalism will prompt more prominent publications to provide similar coverage.

Even in scholastic journalism, where most content is not produced for profit, an imbalance of media exposure unfortunately finds a place. Though The Sidekick strives for equal coverage of boys and girls sports, this does not always happen. This year, when covering multiple events at the same time, live tweeting on @SidekickSports is given to the “more important coverage” and the other event(s) are live tweeted from the other account (@CHSCampusNews). In many, if not all, cases, this means the boys event, as seen in the coverage of soccer bi-district playoffs on March 26.

The reason behind this inequality stems from more than the publication. There’s an internal issue that’s been hindering women in sports for decades: sexist mentalities from the base levels.

Coppell High School’s female teams also see inequality through a difference in support from the student body. Last year, it was not uncommon to see a boys game take place after a girls game and the student body fill up at the end of the girls game for the boys game, rather than in support for the girls team. Though one may see more crowded stands for a volleyball match, that support vanishes the moment a football game is scheduled on the same day. From a young age, girls see actions that imply that they are less interesting than boys, less exciting than boys, less talented.

“Unless people change their mindsets, it’s not going to get to [a point of equality in sports],” Blissett said. “You do have a lot of men who see women’s [soccer], for example, [as] not equal. Not all men, but there is a big percentage that see women’s sport as not the same as men’s. The only way you’re going to get to it being equal, whether that’s gender or sexuality or races, is education. Education is the only way people are going to look at sport as an equal thing.”

Though it will take time, the rise of organizations such as TOGETHXR and Sporting Her will help lessen the negative stereotypes against female athletes. By putting women on the same media level as men, these brands are showing younger women that their contributions to the sport matter, that they don’t have to be taken less seriously just because they’re female. With time, it’s quite possible for support to build up to where there is no longer such a stark difference in crowd attendance.

With each growth spurt of representation in women’s sports coverage comes a new wave of role models for little girls to look up to – and it’s not like they don’t exist. For every Michael Phelps, there’s Katie Ledecky. For every Usain Bolt, there’s Allyson Felix. For every Cristiano Ronaldo, there’s Carli Lloyd.

And if you recognize the male names but not the female counterparts, then hopefully you’re understanding the problem.

Don’t worry, though; there’s a team of women out there working to solve it.