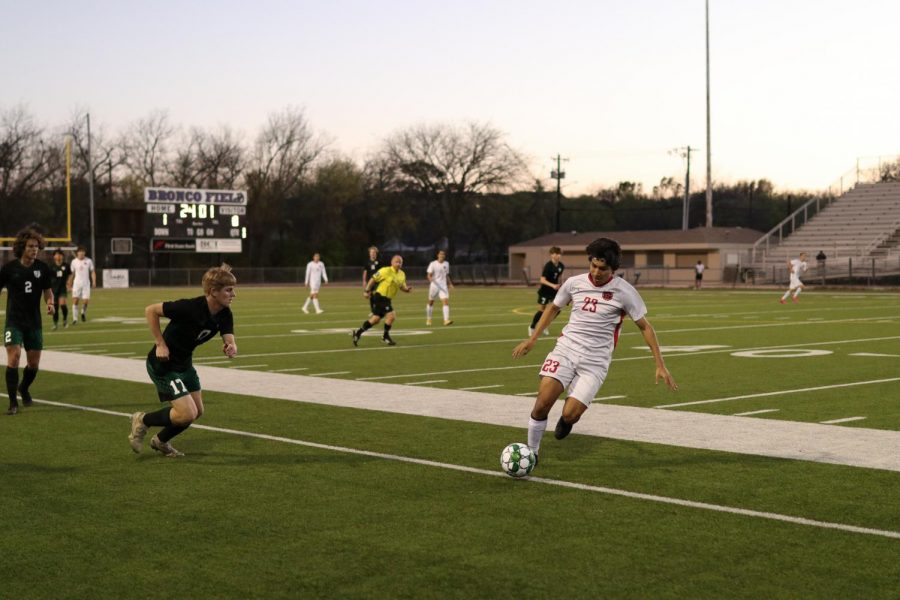 DENTON-  With nerves tingling, the Coppell boys soccer team walked onto the field at Denton High School in a sea of white. The team dropped its bags along the fence line and hustled into warm up.

It only took seven minutes for Prosper to square up its first goal of the night.

The Cowboys season came to a close last night with a 3-1 loss against Prosper in the Class 6A bi-district playoffs.

“[The match] didn’t end the way we wanted but overall the guys played very well,” Coppell coach James Balcom said. “They made a couple mistakes and good teams make you pay. They’re keeper made some big saves on us. At the end of the day, you’ve got to keep your head up and know you played a very good team.”

The whistle blew and the Cowboys took off across the field, gaining possession from Prosper. In an attempt to take the early lead, the Cowboys took two shots against Prosper senior goalie Anthony Lozada.

“We came out strong and had the opportunity to score off a PK, unfortunately it didn’t go our way,” Coppell senior forward Brandon Gast said. “From there it went in a downward spiral.”

With 33:37 on the clock, Prosper junior forward Dunes Nielson made way towards the front of the Coppell box, squaring the pass to Prosper junior forward Gavyn Rosales. Rosales launched the ball, standing directly in front of Coppell freshman goalie Jacob Campbell. Campbell jumped left in an effort to make the save, but it was too late.

“[One of our challenges was] challenging in the box,” Balcom said. “We knew Nielson was going to be tough [and we let] him get a free shot right in front of our goalie 15 yards out. When you’re in a playoff match those types of things can happen.”

The Cowboys pressed on, moving the ball downfield and sending the ball towards Gast. With 30:01 remaining, Gast sent the ball flying towards the net, where it met the waiting hands of Lozada.

Coppell continued to press Prosper before the half, as Coppell junior midfielder Walker Stone squared a pass to Coppell sophomore forward Nic Radicic. With 14:37 remaining in the first half, Radicic headed the ball towards the net.

Yet again, the shot was met by Lozada, tipping it off course and away from the net.

“[At half] we talked about showing energy and needing to come out and keep doing what we’re doing and finish,” Campbell said. “We came out with more energy but once that third goal went in we dropped.”

Coppell took control of the ball early in the second half, before handing it over to Prosper after an attempted goal by Coppell senior forward Collin MacDonald went amiss. With 31:31 remaining, Prosper launched the ball to the far right corner of the net, leaving Campbell no time to come in with the save.

With less than two minutes having passed, Prosper approached the Coppell box ,yet again landing its third goal of the night and bringing the score to 3-0.

Coppell’s energy shifted towards defeat as it struggled to find motivation as shot after shot was blocked by Lozada.

As fate would have it, with 10:39 remaining in the second half, Gast squared the ball towards Radicic at the goaline. In an effort to save the play, a Prosper defender tipped the ball into the net, putting Coppell on the board.

“After our goal with 15 minutes left, we picked up our energy,” Campbell said. “We [started] talking more and bringing each other’s spirits up. We tried all the way up to the last second but it didn’t go our way.”

The buzzer sounded the end of match and Coppell’s contention for area playoffs. The loss marks the first time since 2012 that the Cowboys will not advance past bi-district playoffs.

“We’re proud of our seniors, we love them and we’re proud of everything they gave the last four years, Balcom said. “Our underclassmen had some great examples above them. As long as they continue that effort and work rate through off seasons, we’ll be right back.”