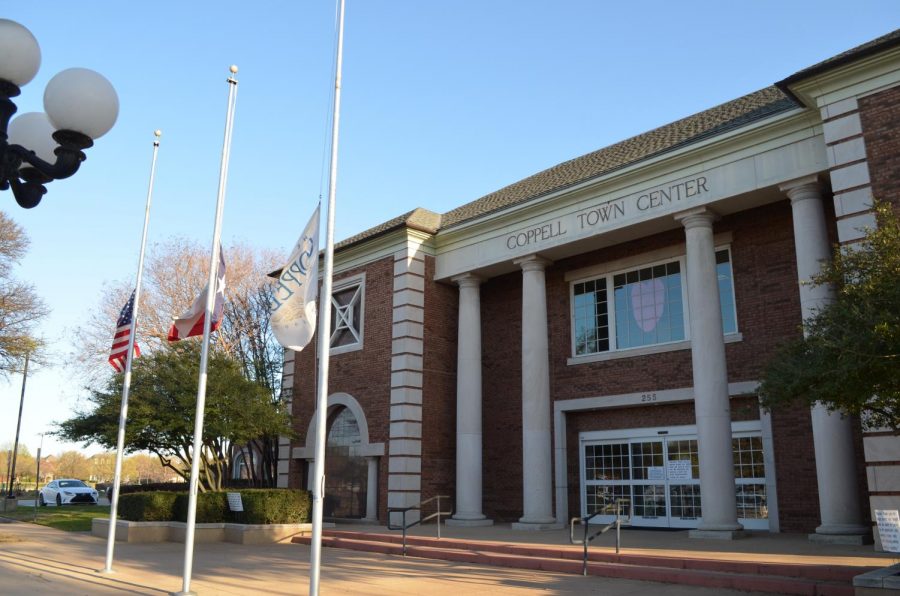 Coppell Town Center flies flags at half mast on Tuesday in wake of the Atlanta shooting. City Council meetings are regularly held on the second and fourth Tuesday of each month at 7:30 p.m.

Rising election costs were a major topic of discussion during Tuesday’s City Council meeting, with many concerned about what the additional funds account for.

Following the changes, a resident of Dallas County can vote anywhere in the county. This system was put in place in 2019 and was used during the 2020 Presidential Election. The increased costs were also a result of a new formula adopted by the county that accounts for the percentage of registered voters in each town to calculate the cost it bears.

“We need to make sure our Senate and House Representatives know that [the cost of elections] is increasing dramatically as they look at new ways for us to hold elections,” Mayor Karen Hunt said.

As the town deals with the budget deficit, additional expenditures are certainly unwelcome. Nonetheless, the election services contract was approved, as was the debated ordinance to amend water block rates and the sewer volume cap. This ordinance increased water block rates and decreased the residential sewer volume cap and comes prior to future changes to the water rates system.

Councilmember John Jun took issue with the still high sewer volume cap and the rising water costs, saying that he felt that they were overcharging the citizens. The ordinance passed, with his being the only “nay” vote.

The council also recognized many exceptional aspects of Coppell during the meeting. The regular session began with a proclamation to honor March 23, 2021, as “Brad Reid Appreciation Day.” This celebrates the 24 years Reid has spent serving Coppell through the Parks and Recreation Department.

There was also great appreciation shown for the libraries of Coppell, as April 4-10 was proclaimed “National Library Week” by Mayor Hunt. This was followed by a report from the library board that highlighted new Cozby Library and Community Commons programs such as ‘Meet Your Neighbor,’ which allows people to hear stories from their fellow Coppell residents with diverse backgrounds. This program began with the ‘Meet Your Immigrant Neighbor’ event, and the Cozby Library will host a ‘Meet Your Asian American Neighbor’ event in response to the rise in anti-Asian American racism.

The Cozby Library has also been named among the top 10% of Texas Public Libraries, a distinction it has achieved now for the sixteenth consecutive year.