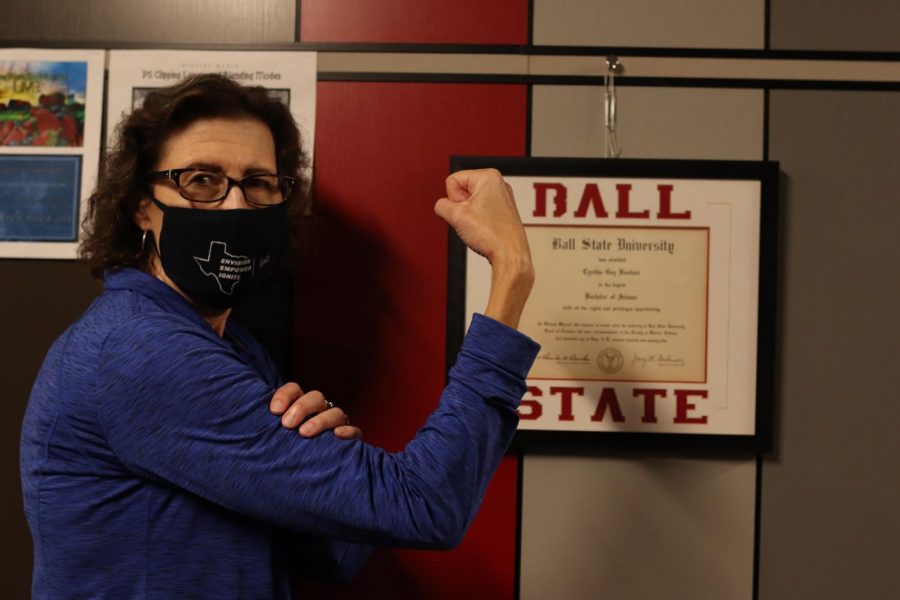 Coppell High School graphic design and illustration teacher Cindy Wolfe majored in industrial technology at Ball State University in Indiana. Wolfe was the only woman majoring in her department, making her one of the first female industrial arts teachers in the states of Indiana and Oklahoma.

When Coppell High School graphic design and illustration, animation and digital media teacher Cindy Wolfe was growing up, she was not allowed to wear pants. Though an article of clothing may seem minor, it is a testament to the world Wolfe lived through and eventually conquered.

Wolfe majored in industrial technology at Ball State University in Indiana and was a pioneer for women in her field. Being the only woman in the department for four years she attended, she had to jump through a couple of hoops to be the individual she is today. When she graduated, she was one of the first women industrial arts teachers in the states of Indiana and then Oklahoma.

“Being [the only woman] through college was exciting, but it was not that big a deal because it was normal for me,” Wolfe said. “Now I realize, wow, it was cool that I was one of the starters for what women do now.”

Many male students in her shop class thought she was less capable of teaching because she was a woman. To prove her skills, she would have nail competitions to see who could hammer the most nails in the least amount of time. Winning those competitions is one of the ways she overcame stereotypes.

“Unless [there is a] physiological difference, women can do whatever men can and be as good,” Wolfe said. “I know [nail competitions] are goofy, but it’s a fun way to say, just because I’m a woman doesn’t mean I don’t know. I proved to [my students] that I shouldn’t be stereotyped because I can do it and they will learn from me.”

Unfortunately, Wolfe was not the only one affected by some of the sexism she faced. At architecture competitions, Wolfe would have to prepare her students for not winning because as a female teacher she faced scrutiny from the judges. According to Wolfe, some men did not like being as good as a woman, but she would brush it off and laugh.

“There are different circumstances where [women] may be at a slight disadvantage because in the eyes of society, we are viewed as weaker or not as capable of making an impact,” Coppell High School senior graphic design & illustration student Grace Bass said. “However, I try to remain positive and remind myself what I am capable of. I have learned to push past little things, whether it is a comment or a passive remark and let them roll off my back.”

Aside from her mother and grandmother, Wolfe has looked up to fellow teachers who helped her along her way. Now, money matters/dollars sense teacher and co-BPA sponsor Megan Mackin looks up to her in a similar way.

“Wolfe is confident and proud of what she teaches in both her [graphic design] content for her classes and BPA,” Mackin said. “She has so much experience teaching, so she reminds me to also be confident in my decisions as a teacher and trust my gut. As someone who has been teaching a lot longer than me, she passes down wisdom.”

According to Mackin, when she and her friends talk about goals they do not assume there is a ceiling or barrier. She thinks women’s mindsets have changed positively because they can achieve anything they want.

Though younger generations tend to look up to female pioneers, Wolfe has the opposite approach and praises young women  for the leaps they have made in recent years.

“When I think about Women’s History Month, I do not think about my generation and the things that I have done, instead I think more about the younger women who are now tech CEOs or female astronauts,” Wolfe said. “[Younger generations] have taken the ball and run with [what my generation accomplished]. They are willing to stand up for what they think is right and make an issue of it, and that’s why [their efforts have] been more successful.”

Wolfe has had the opportunity to be a witness to change. Through her experience, she is able to compare history to the present.

“When I was younger, we were seen as women and then as equal,” Wolfe said. “Now I think we are seen as equals who happen to be women.”

In 2021, women have the option to wear pants and Wolfe was there to witness this stride and step in the right direction. Her story is a testimony to progress.