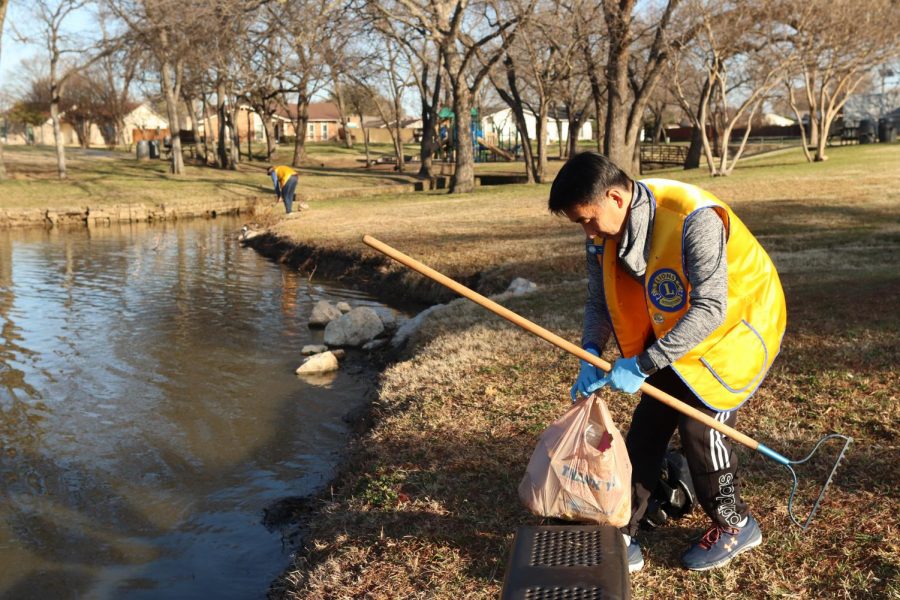 Coppell City Council Place 5 member John Jun picks up trash as a part of the Coppell Lions Club at Duck Pond Park on Saturday. Jun has been picking up trash around Coppell in a way to better support his community.

With the unusual snowfall that had graced Coppell, many residents went to the hillside of the Buddy Echols Field to sled. While many participated in the winter fun, on Feb. 19, two people were there for different reasons.

“I was up [at the high school],” Coppell High School financial secretary Patcee Becerra said. “And where everyone sleds down that hill, on the side [John Jun] was picking up trash. I was in the school for two hours probably, and when I came out, I [circled] the school and went over to where the Tennis Center is and I saw him there again and saw his trash bag barrel open.”

That same day, Becerra did not know who the man was when she went up to thank him, and he didn’t tell her when she asked, not wanting to be known. She later found out that it is Coppell City Council Place 5 member John Jun.

Jun was driving his son, Samuel Jun, to soccer practice when Samuel pointed out how the hill everyone had been sledding on was covered in trash. Mr. Jun decided to take the matter into his own hands and clean the area up.

“All my girls went to high school [here]; [Samuel]’s going to the ninth grade center right now; he’ll be [at CHS] next year,” Mr. Jun  said. “One of the things I try to live by is ‘Be the change you wish to see in the world’ [from Mahatma Gandhi] and that maybe if I [clean the trash] somebody might see it and they might [also] do it.. If you think in terms of, this is our home, and do I want my home to be clean? My yard to be clean? If you put it in that perspective, it’ll change your mentality into ‘I can do this, I can make a difference, why not?’”

Samuel was not surprised his dad did his part to help. His father has a history of helping the community and those around him.

As a city council member, Mr. Jun believes it is crucial to serve the community in more than one way.

“I know a lot of people who think politics isn’t good,” Mr. Jun said. “They talk about politicians [badly]. I believe going into public service as an elected official to me has been [about serving] the community in various ways which is the reason why I involve my time in serving the community. If to be a better [public] servant means to go out there and pick up the trash, then that’s contributing, that’s a way to serve. [I want to] change some people’s idea about what politicians do, it’s not always about being in the chamber, it’s actually being out there and making the little bit of difference that you can, whatever it may be.”