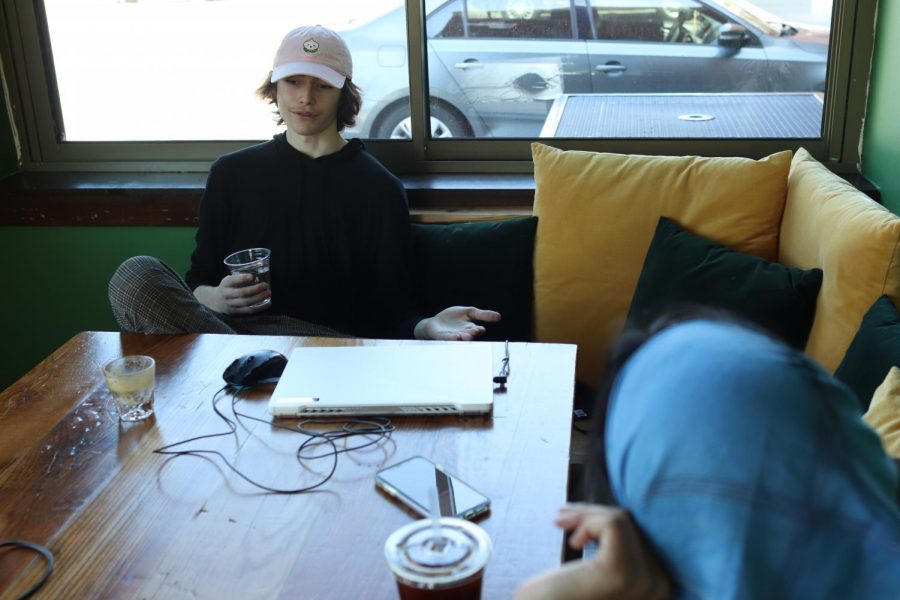 New Tech High @ Coppell senior Cole Ramirez sips on a cortado while talking to The Sidekick co-sports editor Anjali Krishna at Golden Boy Coffee on Feb. 20. Ramirez has a niche for coffee and the power it has to bring people together by forming its own culture.

New Tech High @ Coppell senior Cole Ramirez very well knows he comes off as pretentious. He voices his hate to Starbucks feverently, wears plaid pants casually as an 18-year-old, makes short films with his friends and says his favorite band is The Beach Boys.

Today, however, as he waits at Golden Boy Coffee in Coppell, leaning on the counter across from a barista, carefully balancing the leafy foam art atop his cortado while asking about her family by name, he exudes nothing but thoughtfulness. He has been here since morning, typical for him, settled in a booth far inside the shop. When I arrive and quip that he should “get ready for the deepest questions of his life,” he answers with a serious affirmative.

Ramirez is a self-ordained coffee enthusiast, and Golden Boy Coffee is one of his many niches.

“My first job, ironically, was here, not at Golden Boy but at Zenzero [the previous business at this location],” Ramirez says. “I hadn’t really been into coffee before, but at Zenzero, I’d try all these drinks that they had and that’s how it all started.”

Almost immediately during our conversation, it becomes clear that coffee is Ramirez’s thing, as playing a sport or being in band is to some. His mornings start with a pour over at his house, a process he explains in some detail, then onto Golden Boy for some company with his coffee. After school, he will sometimes head back to Golden Boy or out to try a new place.

“They actually opened up a store in Plano, and I was their first customer on that morning,” Ramirez says. “It was a school day, too; I drove all the way to Plano. I just go to a ton of coffee shops and ask questions. The coffee community is so supportive, and you learn a lot from people.”

Read more in Adobe Spark below.