Closing the gap: Cowboys look to make up ground on Marcus in final home match 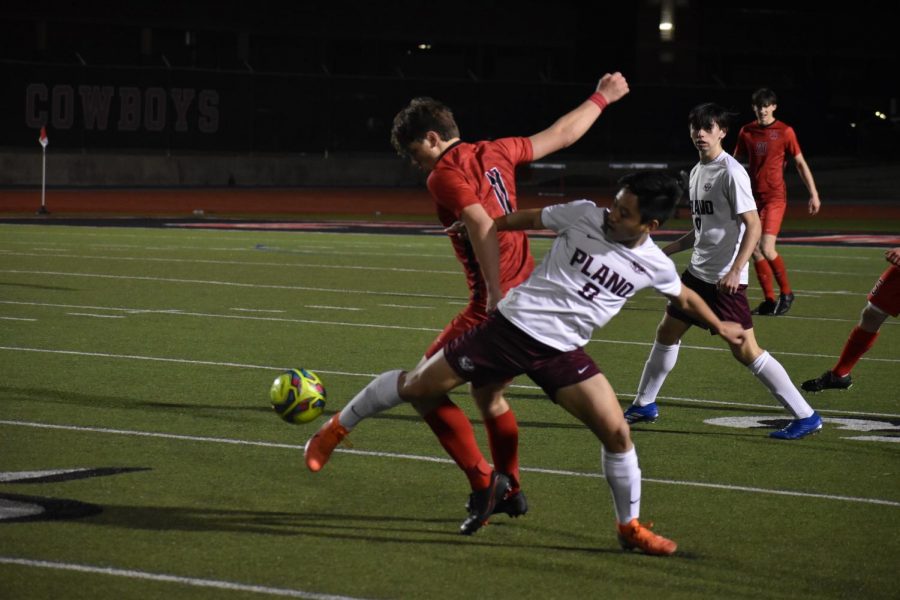 As district comes to a close, with only two remaining matches, every match counts for the Coppell boys soccer team. After regaining its edge with wins last Monday and Tuesday night, Friday’s, 1-0,  loss to Lewisville forced Coppell to fall four points behind Marcus’ first seed.

According to Coppell senior defender Collin Macdonald, the team worked on sharpening out kinks found in its last match against Lewisville in practice Monday, such as a low pass-completion percentage in the first half.

A common problem that has affected the Cowboys throughout district play is coming out slow and a lack of defensive communication. Losses to Plano, Flower Mound and Lewisville were all matches in which the Cowboys opened the match slowly, conceding goals within the first 15 minutes of all three matches and having to chase the game from there.

Going into tonight’s match, the Cowboys are making sure not to underestimate its competition and to play their game from the first whistle to the final.

“We need to go into every game without writing somebody off as an easy win based on their standings. This is one of the hardest districts, anyone can compete for the top spot,” Macdonald said. “[Looking at tonight’s game], Plano East has strong midfielders and forwards, we need to outwork them. Their center forward is also fast, he gets the ball at his feet and tries to turn it, we’re going to try and stay tight to him.”

While Coppell’s loss to Lewisville took a hit to its district title hopes, the Cowboys clinched a playoff berth, as Plano West fell to Flower Mound, with two remaining scenarios in which the Cowboys can win the district championship.

Both scenarios involve the Cowboys having to win out and will need some help to upset Marcus. Marcus will need to either lose one match and tie one match in its next two matches, against Lewisville tonight and at Plano East next week, or tie both matches in order for the Cowboys to regain the first seed. However, any Marcus win, either tonight or next week, guarantees the Marauders win the district title.

The other seeding scenario involves Plano. If Plano defeats Flower Mound tonight and defeats Plano West next week as well as any Coppell loss in the next two matches sees Plano overtake Coppell as second place. Two Plano wins and two Coppell losses would drop the Cowboys to fourth place.

Regardless of the Plano and Flower Mound score, the only thing that can be guaranteed is if Marcus wins the district title tonight or if the race has to go on for longer; second, third and fourth will not be finalized until the last match of district play.