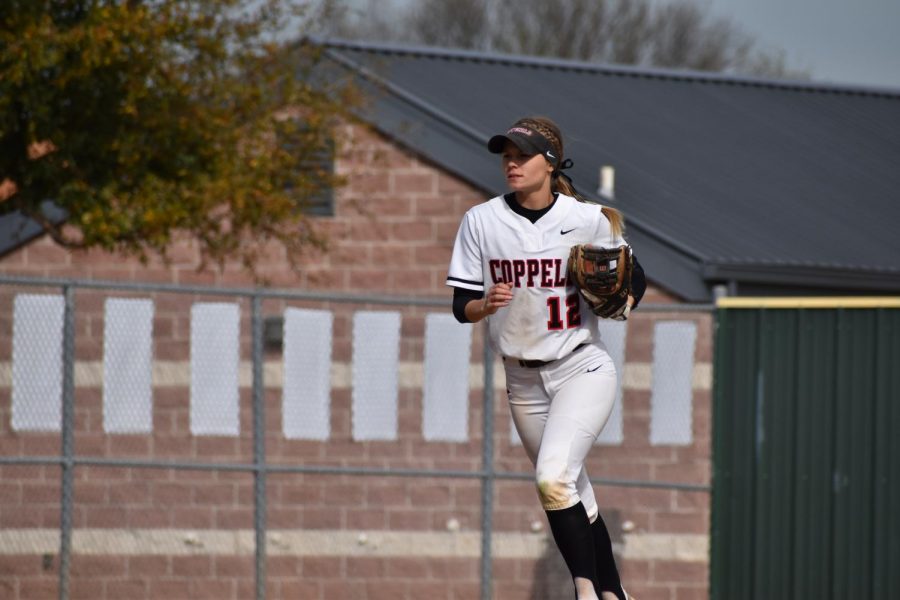 Coppell senior shortstop Sydney Ingle returns to the dugout between innings against Cedar Hill on March 7, 2020 at the Coppell ISD Softball Complex. The Cowgirls won all four games of the 2021 Coppell & Marcus Tournament from Thursday to Saturday.

The Coppell softball team went 4-0 in the annual Coppell & Marcus Tournament on Thursday and Friday.

“[Our] hitting was really strong,” Coppell senior shortstop Sydney Ingle said. “We found a way to put up enough runs to where our defense and our pitchers were comfortable holding a lead. We found a way to score runs where normally we wouldn’t score runs, [such as] on overthrows and on extra bases.”

In practices leading up to the tournament, the team worked on jumping on pitchers early to score first in the game to gain momentum. In addition, the team also worked on its defense.

“Keller is a really, really big hitting team,” Coppell senior catcher Dafne Mercado said. “Pretty much every team that we saw was a very busy  team, except for Cedar Hill. We knew they were going to be scrappy and put the ball down wherever they could, so we were prepared for that.”

The Cowgirls now look to carry the tournament’s success into District 6-6A play.

“We did go down our first district game [9-5 loss to Plano] which is really heartbreaking because we had so much energy and so much heart,” Ingle said. “But that’s only going to push us to do better the next round of district because we have so much fire now.”

“[This season] has been pretty fun,” Mercado said. “It’s been pretty competitive. We did lose to Plano the first district game, but we can only get better from there.”