Blindness will not cloud Sully’s future 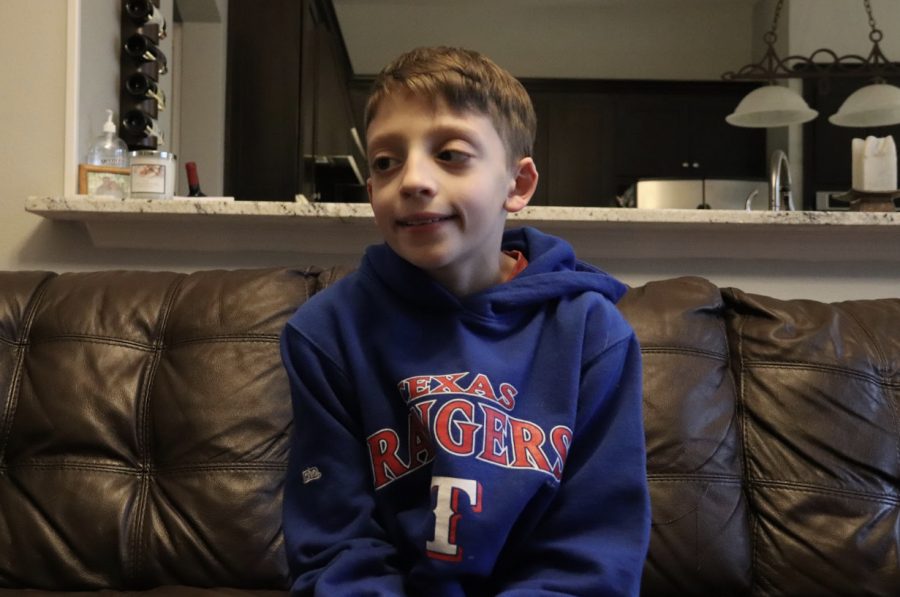 Coppell Middle School East sixth grader Sullivan (Sully) Kessler was diagnosed with stage 4 Rhabdomyosarcoma when he was 2. Although Kessler was blinded by a tumor that grew behind his optic nerve, he stays competitive in both schoolwork and gymnastics.

What does the world look like for a visually impaired sixth-grader that cannot remember going legally blind?

Coppell Middle School East sixth-grader Sullivan (Sully) Kessler wants everyone to know that even though he will not be able to drive because of his blindness, he can still be treated the same way as those around him because the only characteristic that sets him apart is that he cannot see as much as most people.

“Everything that I’ve gone through shows that I can pull through a lot of things,” Sully said. “It shows that even though I did have cancer and am legally blind I can still do the things that most people can do.”

Sully was taken to his pediatrician and then referred to the Children’s Medical Center in Dallas. The Kessler family spent 10 days in the hospital to find there were seven tumors in Sully’s body. One was located behind his optic nerve, causing his blindness. The other tumors were located in his sternum, lungs, pancreas and lymph nodes. Sully was diagnosed with stage 4 Rhabdomyosarcoma. He was given an 8% survival rate if both chemotherapy and radiation were completed.

The family consulted with a radiation oncologist who mentioned the side effects of radiating a 2-year-old body, where he would have radiation in his brain and abdomen. Radiation kills all cells, which is why it is used as a cancer treatment, but it also keeps the body from growing, at two years, Sully’s body was not fully developed, and he would have limbs that would not be able to grow anymore. The family prayed over the decision and they decided to choose quality of life over quantity.

This decision dropped Sully’s survival rate to 2%. Nonetheless, Sully completed 42 weeks of chemotherapy and was in remission in November 2011.

“[Physicians] kept telling us that he was never going to get his vision back, but there would be those times where we would be in the car and [Sully] would notice something that passed by,” Mrs. Kessler said. “He could see something that was just passing by and tell me what it was but he can’t see what’s right in front of him. Usually whenever the optic nerve is destroyed, it does not grow back, for him to even gain a little vision back is a miracle, and he uses every little bit of that vision that he has.”

Sully is blind in his left eye, but in his right eye, he can see blurry images, almost like looking through a straw. Because he can not read traditionally, Sully reads Braille.

“There are a lot of people who might wonder why we need to have Braille when we have technology, and for me, I’ve seen firsthand with Sully and other students that being able to read something for yourself is incredibly powerful,” Coppell ISD teacher for the visually impaired Stacey Chambers said. “I’ve had to see him struggle a little bit. I have to work and push him to do things on his own.”

There are visually impaired students at almost every campus, and Chambers works one-on-one with every student and helps them learn skills they need to be successful. She has worked with Sully since he was 3. Because of the nature of her work, she gets to know students on an individual basis in which lessons are tailored to them specifically.

“Sully specifically likes to be competitive, so when he was studying braille, I always made things a competition,” Chambers said.

Sully found a rather peculiar way to be competitive outside of school; have you ever heard of a blind gymnast?

“We were watching ‘American Ninja Warrior’ and there were several gymnasts there, but there was one gymnast who held the record for the iron cross, and Sully said he wanted to do that,and he asked about trying gymnastics,” Ms. Kessler said. “I called Texas Dreams [Gymnastics] and said, ‘Hey, I have a legally blind child, and he would love to try gymnastics. Can we try?’ and they said, ‘Yes of course we would like to have him try’.”

Sully recently had a gymnastics meet at Ford Center at The Star in Frisco and won first place all-around after facing multiple other gymnasts.

“At first, gymnastics was a lot harder, especially vault because I would have to run and jump on a spring board, and it’s very hard to see the springboard,” Sully said. “It’s like I’m looking at a blurry object that I have to jump on. I had to get used to it and I had to do a lot more.It shows that I can go through a lot of things; it shows that even though I [do] have rhabdomyosarcoma, I can still do the things that most people can do and more.”