Coppell Observer: Montana James and the most useless phrase in the history of English 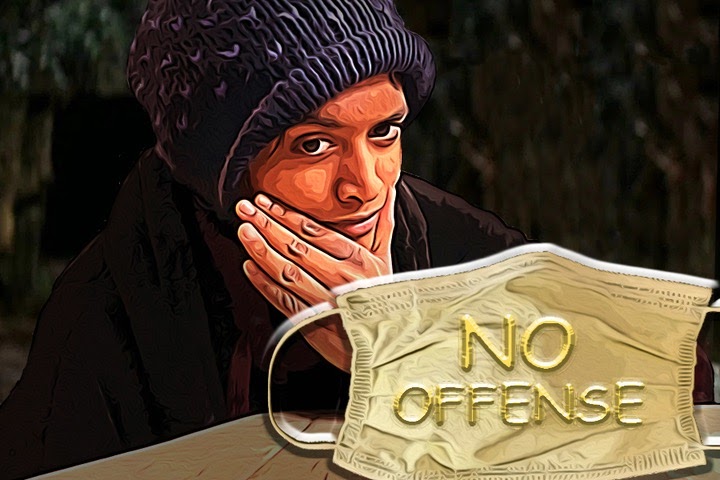 The phrase “no offense” is used, more often than not, before a phrase that would otherwise be wildly offensive. The Sidekick editor-in-chief Sally Parampottil and her trusty friend Montana James ask an important question about this phenomenon: “Why? Just why?” Photo illustration by Sally Parampottil and Srihari Yechangunja

Coppell Observer is a humorous column about life as a teenager. Please be warned that any and all sass is due to the writers’ similar situation as adolescents (even though we feel so much older). You, the reader, should not take any of these words to heart. Seriously. If this article makes you laugh, leave a comment.

By Jove, you’ve done it.

Montana James, you have single-handedly found the solution to the world’s most pressing issue: “How do I tell someone my unnecessary opinion when I know it will offend them?”

Legend has it that back in the old days, this phrase was used to appease the masses and signal a lack of malintent that came along with some rude or unwarranted comment. People would quake at its power, for who could be so bold as to be offended when someone said:

Monty, I don’t know if you know what you’ve stumbled upon here, but this phrase was said to have incredible calming properties. Now, I truthfully don’t know how successful this actually was; for all we know, it could be as useless as essential oils, leeches, mercury, not bathing and refusing to wear a mask in a pandemic. Still, the widespread use of this phrase might imply its continued success, at least temporarily, in conversation.

Can you imagine what sort of power we now possess with these two words?

“No offense, but your wife is ugly.”

“No offense, but I hate the way you talk.”

“No offense, but if I had my way, you and your offspring would cease to exist and never again taint the face of this earth with your foul DNA.”

Any statement in the world is ours to speak aloud without fear of repercussion!

Oh Monty, the things we could do. Our opinions can no longer be silenced by things like politeness or common decency. No no, the importance of our own, uncensored thoughts can finally take precedence over the feelings of others and they can’t do a darn thing to stop us!

There have been weak attempts to mimic this power, imitate its ability to diffuse a situation. I heard of many who tried the “I can’t be racist, I have Black friends” and “I can’t be sexist, I was born of a woman and love my mom very much” lines, only to be blasted by the power of social media, stabbed by the swords of social justice warriors or swallowed by the dreaded blue bird.

Their issue: they used these as defense after their comments were made. “No offense” solves that problem by being an offensive phrase – not offensive as in to offend, but offensive as in the opposite of defensive – and going before the comment is made. Sometimes it can even be tacked on at the end and still be effective.

“This dance recital has been the biggest waste of my time. No offense.”

“This is the single worst meatloaf that I’ve ever tasted. No offense.”

“I would rather be literally anywhere but here. No offense.”

Then, with hearts shielded by the sheer might of the verbiage, the other person in the conversation will say, “None taken,” and both parties will go on with the rest of their lives without the slightest bit of unhappiness.

This phrase gives us the power to do what a lot of idiots think the First Amendment already does!

No offense, Monty, but you’re really acting like a real stick in the mud right now.