Opinion: Give it a listen, think again

Rap music is often associated with negative connotations such as violence and gangs. The Sidekick staff writer Varshitha Korrapolu thinks rap music is a powerful genre that should be relieved of its cynical views.

Those songs are usually about profanity, shattered young love or substance abuse right?

This is typically what many people associate rap music with. However, in reality, rap music is beautiful. It portrays harsh realities that pop or other genres of music cannot do justice to.

If rap songs were just a bunch of jumbled up words, then why are so many young people inspired and motivated by them? Why do they feel invincible when those lyrics sink into their minds?

Rap music originated in New York during the 1970s. It was predominantly made by Black people and diffused from Black block parties. Over time, the significance of rap music flourished as it transformed from a source of entertainment to telling deep, yet strengthening stories.

When talented people craft songs utilizing emphatic, fervent words to depict their difficulties or opinions, young people absorb every ounce of what they listen to. 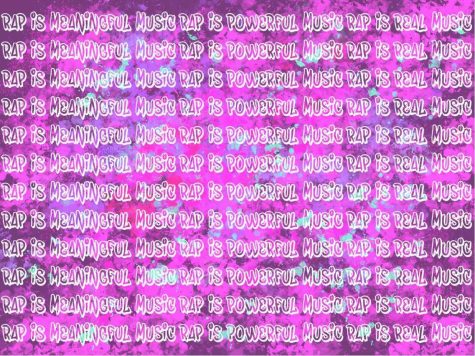 Exposure to rap and similar styles of music is correlated with improving mental health issues in youth. In the form of a story, these songs capture the artist’s problem and detail how the artist has grown since the struggle subsided. This is especially relevant to those who grow up in low income, impoverished areas, as these regions encounter activities, such as gun violence and illegal use of drugs among others.

When I did not have people by my side, I had uplifting rap music.

I had Juice Wrld’s lyrics, such as this one from his song “Empty.”

“We’re perfectly imperfect children, rose from the dust, all of us are on a mission.”

I had Eminem’s lyrics, such as this one from his song “‘Till I Collapse.”

“This is your moment and every single minute you spittin’, trying to hold onto it ’cause you may never get it again.”

When the activities I love most vanished because of the pandemic, I succumbed to overthinking and anxiety. During these times of loneliness, I started listening to more rap music to find out how other people dealt with difficult circumstances they faced. I learned how people had endurance to persevere through countless horrific situations. All these changes and growth occurred solely because of the beauty of rap music.

Four years ago, prominent rapper Kendrick Lamar Duckwort, commonly known as Kendrick Lamar, released a song called “FEAR.” Lamar grew up in Compton, Calif. which is considered to be one of the most dangerous cities in the country due to frequent gun violence. In the song, Lamar reflects on his life as an African American man. Lamar uses music as an outlet to express how his identity was impacted by former President Donald Trump’s beliefs and actions.

Rap music takes these important topics and rappers intertwine their personal experiences with them giving listeners a new angle. Rap utilizes artistic elements, like poetry, which elevates the vital messages rappers communicate through their songs.

Society tends to stereotype rap music with labels such as depression or people “going too far,” corrupting our world’s future leaders and vulgarity.

“Most people would definitely associate [rap music] with [negativity and profanity] because of the way rap music is portrayed,” Coppell High School sophomore Preston Taylor said. “A lot of it contains guns and drugs because that’s what the rapper had gone through. It’s a way of expressing, ‘I came up from that. That’s what I grew up with.’”

Next time you open your music streaming application, try to listen to a rap song, and be revolutionized by what you hear.