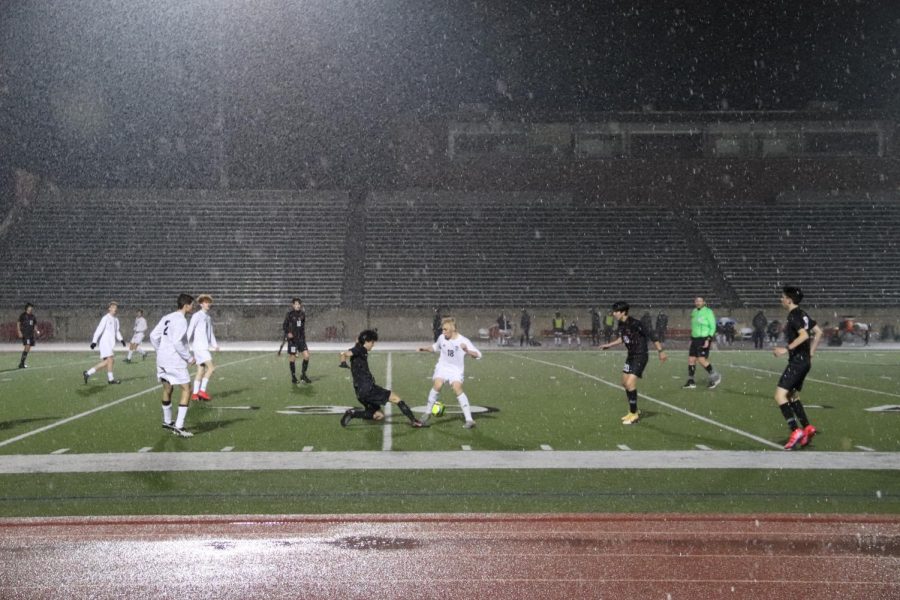 Coppell sophomore forward Alejandro Reyes goes in for a 50-50 against Flower Mound senior defender James Chamberlain at Buddy Echols Field last night. The match experienced many lightning delays but the Cowboys eventually dropped the match, 1-0, after play was called five minutes into the second half.

The Cowboys entered the half tailing Flower Mound by one and were fired up to come out and play their game. But then the storm came minutes after entering the building.

After waiting out the first storm delay for 30 minutes, the Cowboys set out to start the second half and got to work as soon as the whistle blew. Within five minutes, the Cowboys scored a goal that was disallowed and caused a handball in the penalty box that could’ve been a penalty. The Cowboys had all the energy on their side but as the clock struck the fifth minute, the second storm rolled in and the game was abandoned.

“We were probably fortunate to get the five minutes but that’s not enough time to really get back into a game but saying that, the boys were right there and get a handball in the box which is tough for the ref but there are a lot of refs in the state that make the call [for us] and we would’ve been fortunate to escape with the 1-1 tie, but just need to come from the gates better than we did,” Coppell coach James Balcom said.

The Cowboys fell to Flower Mound, 1-0, and ended their six match winning streak in the process last night at Buddy Echols Field.

Flower Mound started off the match flying at Coppell, overwhelming and leaving it with not much time and space on offense while skirming them defensively. The Jaguars picked up their first goal after a freekick was rebounded with 26 minutes on the clock. With 15 minutes left in the match, Coppell got into its groove and began to create chances by dominating possession and play.

“[We did not come out well] because of preparation, we felt like we were too good for the other team and that we could just show up and get a result but need to come out, every game, work as hard as we can and fight for our result instead of having it handed to us,” Coppell senior forward Brandon Gast said.

Coppell was the hottest team in district play, allowing the fewest goals of any team in the district, coming into this match. Flower Mound senior forward Joey Perryman had five goals over two matches  on Monday and Tuesday and tested the Cowboys in this match.

“You never want to lose a game but there can be good losses in how we bounce back and maybe [this result] is a good wakeup call as district play begins to wind down,” Balcom said. “If we walk out of here and it’s just a loss, we don’t learn anything and we just continue coming out slow then we are going to look back and [this game] could have been a down point for us. But if we use it for some motivation and a lesson of ‘we have got to come out every single game regardless of who we’re playing then hopefully we can take a good message from it.”

This game gave Coppell (10-6-1, 6-2 in District 6-6A) the opportunity to maintain sole possession of first and extend to its lead but the loss against Flower Mound (8-3-3, 4-2-2) means that the gap from first to fourth is now only four points. The Cowboys still slightly edge out Marcus with a better head-to-head record for first place.

“[Our loss] keeps Flower Mound in the race, it puts us real close with Marcus and Plano again but at the end of the day, we got Marcus and Plano coming up so if you wanted to win district here’s your chance,” Balcom said. “I know [the loss] stings and nobody likes it but we have to take care of Plano and Marcus so hopefully we can bounce back tonight.”