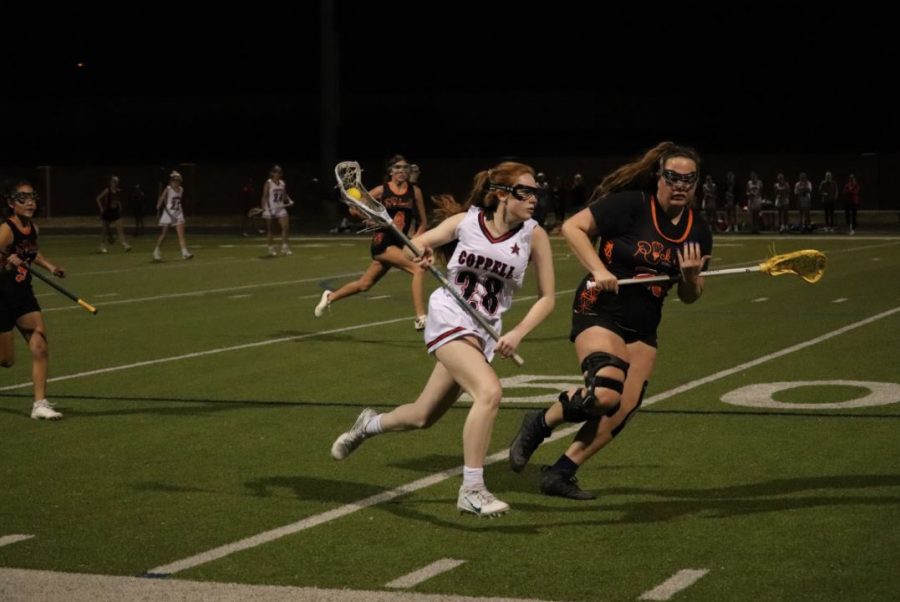 The Coppell Middle School North stadium went dark with no visibility of the field for 15 minutes. The break was not great for the Cowgirls as the momentum of their play dialed down a notch. They equalized within two minutes of the second half but it was all Rockwall from there.

“Obviously that is never ideal but that’s where it’s on us to keep that energy up,” Coppell coach Logan Hendrick said. “It’s unfortunate that things happened, anything can happen in any situation in a game, and it is our responsibility to just keep our momentum up, keep our energy up regardless of what’s going on environmentally around us.”

After Coppell junior midfielder Claire Bryant tied it for Coppell at 6-6 with 23:45 left in the second half, Rockwall had multiple plays on impressive runs and were too much for the Cowgirls to handle offensively. The Yellowjackets responded by scoring five goals in five minutes and rode their offensive drive to victory.

“Rockwall is a great team, they have a will to win, and we knew that it didn’t matter how good our systems were, we had to fight their will to win and ultimately it came down to a tied game with equal opportunity and they had a stronger will to win than we did,” Hendrick said.

Going into the Frisco game tomorrow at Coppell Middle School North, with faceoff at 7:30 p.m., the message to the girls will be to work on fundamentals and bring the system up from the ground according to Hendrick.

“We’re going back to doing the little things right, just focusing on our will to win, doing what we do well and partnering our will to win with the good fundamentals we have,” Hendrick said.