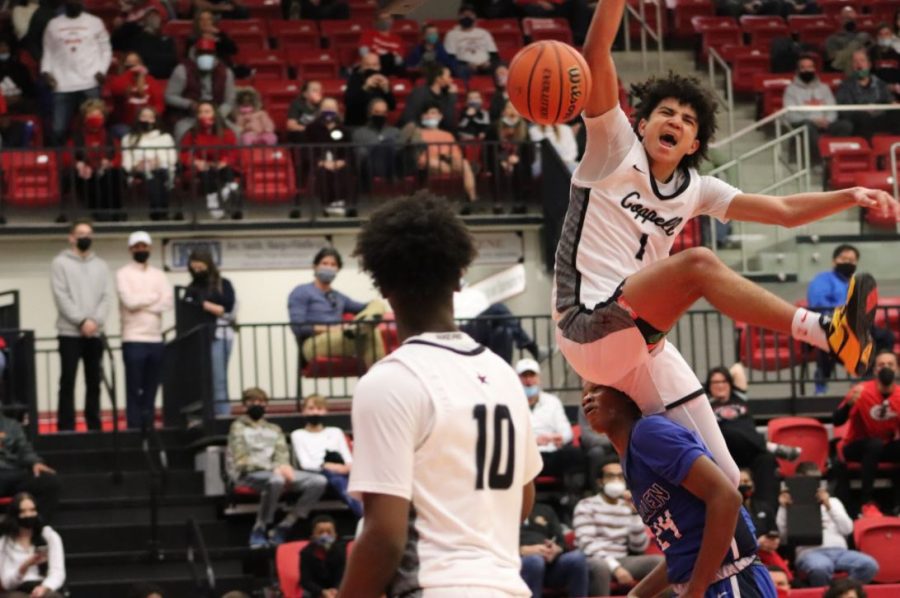 Coppell junior guard Naz Brown watches junior guard Anthony Black dunk against Allen during the second quarter at the CHS Arena on Feb. 20. Black announced his decision to commit his future to basketball over the weekend at the War Before The Storm tournament in the Advantage Sports Complex in Carrollton.

With a rare home court playoff game, determined by coin flip, after a week layoff from all group practice due to inclement weather, the Coppell boys basketball team didn’t miss a beat and rode the home-court advantage.

With the win, Coppell advances to the Class 6A area round of playoffs for the fourth straight year and will play either Lake Highlands or Arlington Lamar, who meet on Tuesday, on Thursday, with time and place yet to be determined.

“With the layoff from the weather and not being able to practice, you never know how the team’s going to come out energy-wise and what condition they are going to be in,” Coppell coach Clint Schnell said. “Getting to play at home, in front of the big crowd, got [the team] going and got us off to a great start.”

Coming into this playoff game, the star power of Black, Agarwal and Coppell junior guard Naz Brown was expected to shine and it did as the Cowboys opened with a 9-0 lead over Allen within two minutes of the first quarter and rode the offensive drive to a 20-6 lead to end the first quarter.

The Cowboys had offensive possession for most of the first quarter mainly due to the defensive tone set. Coppell forced more turnovers (eight) from Allen than points scored (six) in the first quarter.

“[Our defensive stops were] huge,” Agarwal said. “It leads to offense and that’s our thing, transition points and [offensive pressure] all starts on defense. [Coppell senior center Tim O’Hearn] was huge in the first half getting those steals and blocks, leading to our transition plays so it’s going to be huge in the next coming rounds to stop other teams on defense and take it on offense.”

“There was a stretch halfway through the second quarter where we got the big lead and relaxed a little bit [defensively],” Schnell said. “We started to let them get back into what they like to do, they changed the pace when they started pressing us a little bit.”

After regrouping at halftime, the energy switched back to Coppell early in the third quarter with a single play: Black recovered a defensive rebound and took it the whole court for a highlight-reel dunk, erupting the crowd with it. The Cowboys rode this energy switch and outscored Allen 33-13 in the second half.

“[The dunk] was huge,” Schnell said. “[Black] thrives off of that [energy], he recognizes when a big play needs to be made and puts it on his shoulders and gets it done for you, whether it’s throwing down a big dunk, hitting a big shot or even hitting an open teammate and getting them a shot.”

Black and Agarwal ended the afternoon by combining to score 46 of the 64 points for the Cowboys and left the CHS Arena knowing that having fun and playing for each other would put them up against any team they face.

“[Executing plays perfectly] is important because when we have fun and a lot of energy, we are hard to beat and we play a lot better when we’re having fun.” Black said.