From tragedy to melody: Aitha evolving in music creation 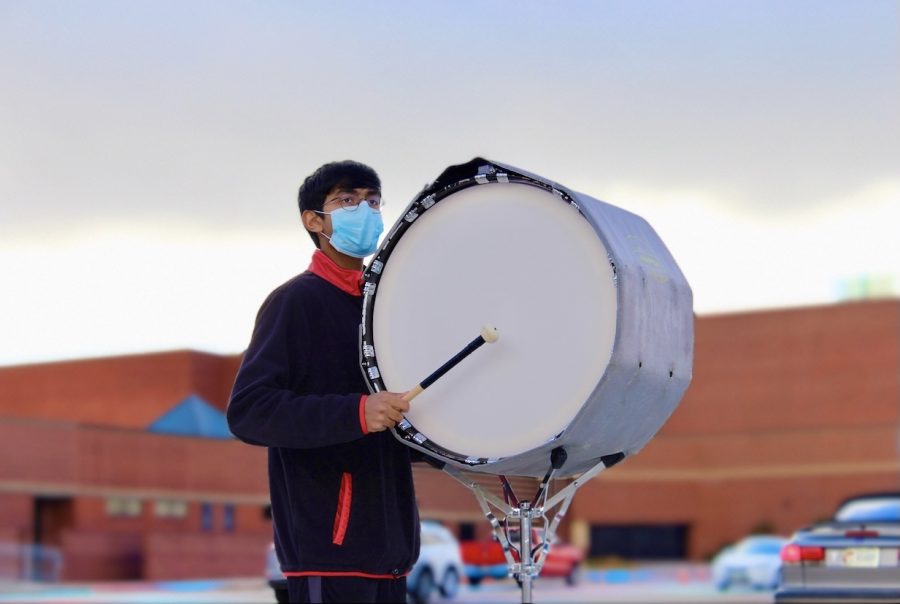 Coppell High School senior Akhil Aitha plays the marching bass drum on Feb. 8 in the CHS parking lot outside the band hall. In addition to percussion, Aitha makes music outside of school by singing and producing beats on his computer.

Three weeks after the release of his song, “Na La Lenu,” Coppell High School senior Akhil Aitha woke up to find the music video had been viewed 3,500 times.

The song, released Jan. 10, is Aitha’s first Telugu piece. The lyrics were originally part of a poem written by his father’s cousin Nihar Bheemanathi before Aitha shaped them into a song with his music production and composition skills. Aitha grew up in a Telugu-speaking family, but he did not understand the meaning of the lyrics when he first heard them.

“It took time for me to write something new,” Bheemanathi said. “[Aitha] didn’t ask me for anything specific, so I gave him two lines I wrote a couple of years back, and he really liked it. That’s how the song started.”

The two went back and forth for months, Bheemanathi sending Aitha poem fragments and Aitha carving a melody out of the words. By November, the song’s concept was in the works.

Aitha recorded the music video in Dominican Republic over Thanksgiving break and finished the song in time for the new year. As he watched the number of views climb in the days after the song’s release, he was shocked by the reach of his music.

“I didn’t expect to get that many views and that much praise,” Aitha said. “I’m really proud of the work I did.”

Aitha’s first experience with music was in third grade, when he started drum set lessons. Five years later, tragedy struck as his drum set teacher, Lou Many, died from a heart attack. Aitha quit drum lessons after that, choosing instead to focus his efforts into the band program at Coppell Middle School East, which he had joined in sixth grade.

“By the time high school rolled around, I was continuing percussion,” Aitha said. “The sadness that stayed with the drumset learning with my now passed teacher faded away, and I was brought to a new source of happiness with marching band and concert band.”

In addition to band in middle school, Aitha started experimenting with beats. At first, he used the application GarageBand to create music, before upgrading to Logic Pro in his sophomore year of high school. A year later, he was inspired by producers on YouTube, namely versus beats, Ocean, Ramzoid and Mai, to start uploading his creations to his own YouTube channel.

“The biggest change is my maturity in the choices I make when creating music,” Aitha said. “Whenever I’m playing [an instrument], I learn the nuances of music. I learned intricacies regarding dynamics, tempo, the variety of instruments I have to play and how to blend all these factors together.”

Aitha is currently working on the tambourine piece “Dimensions” in the CHS percussion program. The piece helped him develop his tambourine technique and is a key example of how his music talent has evolved over the years.

“[‘Dimensions’] was written for seven tambourines, so every member is on a tambourine, which is unique because most times in an ensemble piece, there’s only one tambourine being used,” CHS percussion director Annie Chernow said. “[Aitha] essentially had to learn a new instrument [and] use extended techniques involving things you would play on a world instrument like an Indian drum or a Middle Eastern frame drum.”

Apart from learning how to play instruments and create a beat, Aitha has been training vocally from a young age. Aitha learned classical Carnatic music from his grandmother and uncle during childhood summers spent visiting family in Hyderabad, India. He built upon these skills to record “Na La Lenu,” and recently, he returned to FaceTime lessons with his grandmother in an effort to expand his vocal ability.

In the future, Aitha plans to continue making Telugu songs and focusing on music production in his free time.

“The process of creation is what draws me to making music,” Aitha said. “It’s so fun to take the ideas in my head and put them in a project and be able to call it mine. That’s the best part.”