By Torie Peck and Anette Varghese 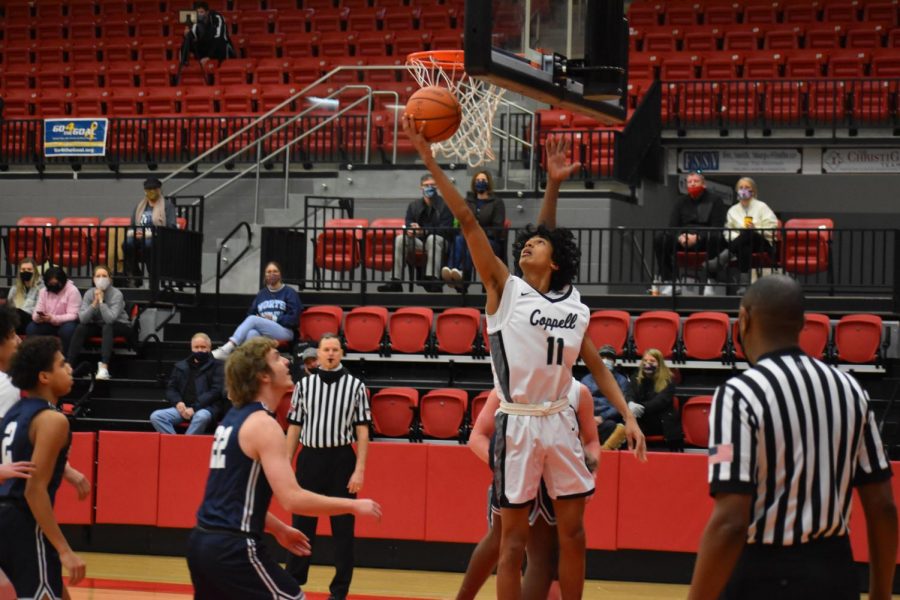 After the final three games of the Coppell boys basketball season were postponed due to COVID-19, the Cowboys returned to the court on Saturday.

Playing its third game in 24 hours, Coppell lost, 57-53, in overtime at Plano on Saturday night. The Cowboys finish the regular season 12-2 in District 6-6A and 18-3 overall. Coppell and Marcus finish the season as district co-champions. The Class 6A bi-district playoffs open Thursday-Saturday, with Coppell’s opponent and location to be determined.

“The game didn’t turn out how we expected,” Coppell senior guard Ben Klement said. “[Plano] didn’t do anything we weren’t prepared for, we simply lacked the ability to overcome what they brought.”

Coppell’s defense, scores and transitions brought it the early lead at 15-10 after the first quarter. In the second quarter, Plano (10-14, 7-7) rallied to tie the score at 27 at halftime.

“We didn’t play our best from the [get-go],” Klement said. “We were missing shots while [Plano] was able to hit their shots and free-throws which progressed their lead. We needed to do a better job at breaking [Plano’s] zone.”

“We came out and played hard early to get the lead,” Coppell junior guard Anthony Black said. “We needed to be patient on offense as Flower Mound ran zones. We played good defense and limited their points.”

Coming into the half the Cowboys focused on keeping up their energy and momentum, after leading the first half 31-16.

“We continued to move the ball and make good shots,” Agarwal said. “We brought our [backups] off the bench and they did a good job of keeping the lead up.”

At the end of the game, Coppell switched out its starting lineup in order to give backup players more gametime. With

5:13 remaining in the fourth quarter, Klement Euro Stepped past a Flower Mound defender and scored, bringing Coppell’s lead to 48-25.

“The game went fairly well,” Coppell junior guard Naz Brown said. “We controlled the pace and adjusted our game. It’s our first game back so adjusting our game [was difficult].”

Plano West took first possession of the ball after winning the tipoff, giving it the first lead of the night. As the quarter progressed, Agarwal stepped up and shot a three, scoring the 1,000th point of his career Agarwal’s three-pointer.

The Cowboys used the momentum from Agarwal’s shot to lead the first half, 40-24.

“Once we got that lead we never let them back in it,” Coppell junior point guard Devank Rane said. “Our defense really picked up, which helped our offense [continue to score].”

With 23 seconds remaining in the game, Black scored the final shot of the night with a layup, bringing the lead to 58-42.