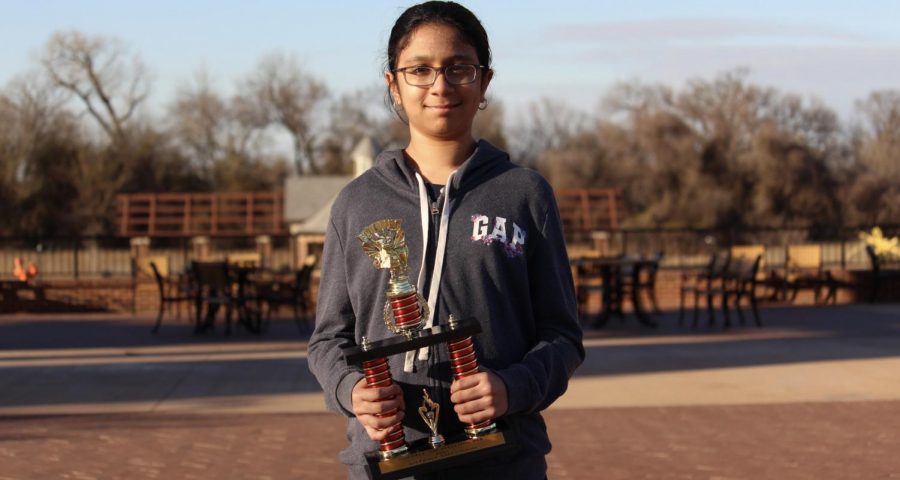 Denton Creek Elementary fifth grade Coppell ISD Spelling Bee champion Sriya Gomatom made history as one of the first CISD winners from an elementary level. Gomatom will move onto the Dallas County Spelling Bee on Feb.19 at the Vonita White Administration Building Boardroom.

Intense silence filled the room as district spelling bee contestants began their proctored online exams. After 30 minutes had passed, time was up. Spellers left the building, unsure of their results.

Who would be the runner-up and champion?

“I was worried about the bee and I was nervous, but excited as well,” Gomatom said. “The system was faster than years past, and since we were socially distanced, we didn’t talk as much.”

The district-wide spelling bee was administered on Jan. 14 at Coppell Middle School West with the new Scripps online platform. This is different from typical spelling bee procedure as spellers remained socially distant with earbuds and their own devices. Contestants were selected based on who won the spelling bee from individual schools. The test was the same for every participant. It consisted of 50 questions, half of which were multiple choice about vocabulary and the final half about the word, spelling and language of origin.

“You learn a lot of skills from being able to compete at that level,” Coppell ISD director of literacy Dr. Anita de la Isla said. “They get the experience to improve their spelling and vocabulary, which will help them throughout their lives.”

Although Gomatom felt nervous, this was not her first time winning a spelling bee.

“Sriya is a very good student because we never have to tell her she has something due or remind her of any assignments,” Gomatom’s mother Priya Vijay said. “In her spare time she always reads books. The first time Sriya went to a spelling bee she was in second grade and it was because her friends were there. She ended up winning it. We realized then she might be truly interested in spelling bees.”

On the other hand, Amresh had not participated in a spelling bee prior.

“I spent a lot of time reading to expand my vocabulary and looking up the definitions of all the words,” Amresh said. “I felt really excited. I did not think I would be the runner-up. I was very nervous, because I had no idea what the questions would be like.”

Part of Amresh’s success can be attributed back to her parents. They continually encouraged her and motivated her from a young age, checking out books from the library which she read voraciously. They helped her through ruts when Amresh felt uncertainty.

“Aditri is very into studying and has a habit of reading books,” Amresh’s mother Nupur Srivastiva said. “Sometimes we have to tell her to stop reading and that she can play and do other things. We were really happy for her. We thought she really worked hard for it. During Christmas holidays she read those lists and she took it very seriously. Instead of going somewhere and having fun, she gave her best to the spelling bee.”

Gomatam and Amresh will be advancing to the Dallas County Spelling Bee taking place Feb. 19 at the Vonita White Administration Building boardroom.

“They beat out all the elementary and middle school kids in the entire district,” de la Isla said. “That just tells you right there that they are special girls.”