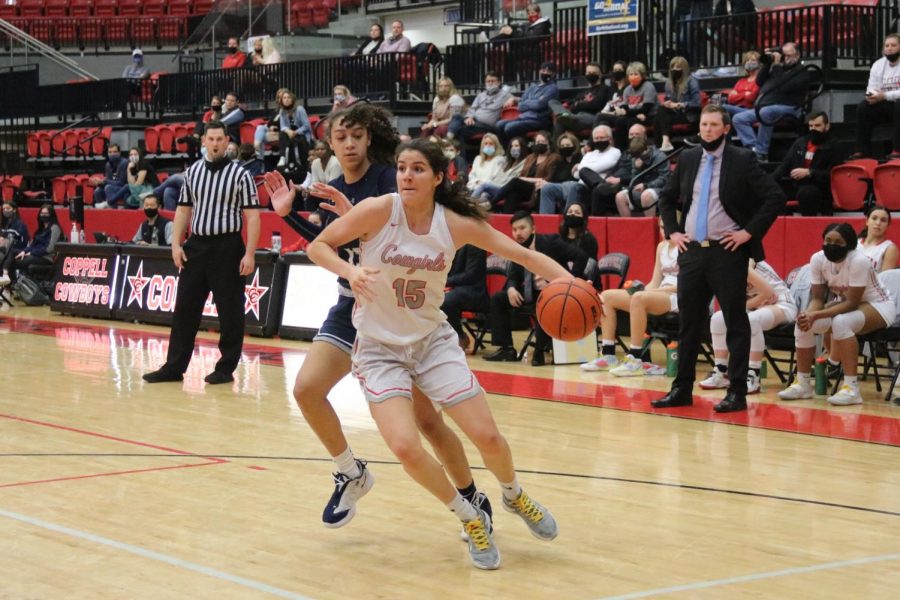 With four minutes ticking on the clock and the intensity of overtime sinking in, Coppell senior guard Emma Sherrer was guarding the very opposing player who had tied the score for Flower Mound with only seconds left of regulation.

Her last game as a Cowgirl. Her last minutes on the court with her team. Her last moments after four years in the program.

That last bit of time resulted in a 55-48 victory over Flower Mound last night in the CHS Arena, the season finale for the girls basketball team.

“I was almost excited because this was my last game; as a senior, I’m not playing next year,” Sherrer said. “It was cool to kind of extend our game an extra four minutes. In the last minute of regulation, we didn’t play as well as we could have, and it was good to be able to show that we have learned and we have grown over the season.”

Though the Cowgirls had taken an early lead, stalling the Flower Mound offense and entering halftime, 27-18, the lead slowly diminished throughout the second half of the game. Regulation ended, 45-45.

“Our defense fueled our energy in the first half, whereas in the second half, they kind of switched up their offense,” Coppell coach Ryan Murphy said. “Our guards were overhelping on the shooters, and it allowed some of their guards to get loose, and they are a really good shooting team.”

The first two quarters saw dominant Cowgirl possession, and the only free throws in the first half were in the last minute of the second quarter by Coppell sophomore guard Waverly Hassman. The second half saw more fouls and greater fluctuation in possession. A faster paced fourth quarter set the stage for overtime, in which the Cowgirls regained their intensity and finished through with a comfortable seven point lead.

“It was a good note to end the season on. It epitomized our season to go into overtime at the end of the game that we should have won,” Sherrer said. “It’s the kind of team we are, we let teams that shouldn’t beat us get close, but in the end, we pulled away with it. I’m glad that we ended it the way that we did and got four extra minutes of playing time.”

Coppell ends with a 13-13 overall record and finishes fifth in District 6-6A.