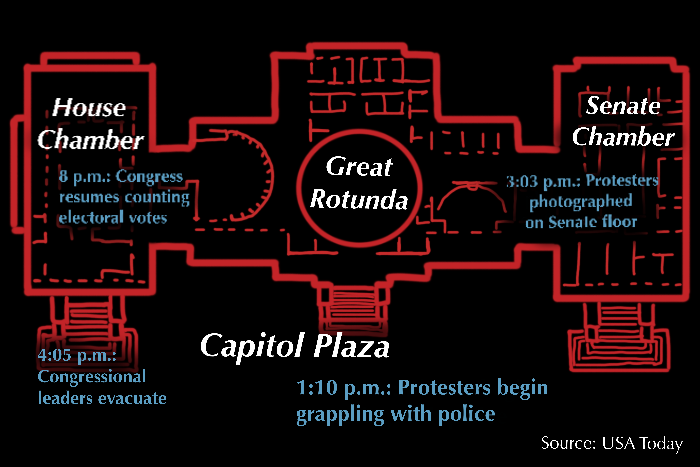 A cross-country road trip from her hometown of Coppell, Texas took Angela Almeida to Washington D.C. on Jan. 6 – the day of the Capitol protest.

“We were walking from Union Station when we started seeing all the flags,” 2010 Coppell High School graduate, former Sidekick editor, journalist and documentary producer Almeida said. “Being the journalist by nature that I am, and being an overly curious person, I followed them. Even though I wasn’t on assignment, I knew that you don’t just let these hordes of people pass you and not go see for yourself what’s going on.”

They led her to President Donald Trump’s Save America rally, during which Trump discussed his belief that the election results had been falsified. At the same time the speech ended, two lawmakers – Representative Paul Gosar (R-Ariz.) and Senator Ted Cruz (R-Texas) – objected to the certification of Arizona’s electoral votes.

“The first reports started coming in, so you’d get a New York Times alert that Arizona had objected,” Almeida said. “That’s when I really started to sense that the tone of the crowd was shifting.”

An hour later, protesters were gathering by the steps of the Capitol building, and soon began trying to enter the building, facing some pushback from police. They triggered an evacuation of buildings on Capitol Hill as they enclosed on the Capitol steps, and as senators and representatives were eventually ushered out of the building along with the journalists who had been covering the certification, protestors burst in. They chanted about their distrust in President-elect Joseph Biden’s victory, and broke windows and glass while entering the House and Senate chambers carrying “Make America Great Again” and Confederate flags.

“How they treated the United States Capitol is absolutely horrendous,” CHS senior Jordyn Morris said. “And the name in which they did it is horrendous. The fact that they were flying Confederate flags and wearing Nazi slogans inside of the United States Capitol is horrible. It was such an outward display of truly the darkest parts of our country, and it just completely tore me up inside.”

Almeida was on assignment in the nation’s capital during the Women’s March in 2017 for a story, and compared that experience to the Capitol protest.

“I’ve seen so many of the same things, but just in completely different context,” Almeida said. “At the Women’s March you saw pink hats, the form of dissent was knitted pink pussycat hats. The form of dissent that I saw here was baseball bats.”

At this point, many of the evacuees issued statements condemning the violence. Some time later, Biden, former U.S. presidents, and world leaders would join them in their denouncement of the actions of the protestors. The protesters vandalized the building and stole House Speaker Nancy Pelosi’s podium, and were also seen destroying news broadcasting equipment and harassing reporters.

“[Trump] does not want the powers that be in the media at large,” Almeida said. “The media has largely been serving its function to check government, and that’s how democracy works. There’s a reason why we have people that put their lives on the line for this, and I have friends that were in the Capitol and taking photos of people who were in the media center outside of Capitol, and they got their equipment completely wrecked.”

Trump, in spite of his support for and agreement with the protesters’ belief that the election had been stolen from him, would later issue a statement criticizing them for engaging in violence.

“I cannot believe that there is a group of people that is so rooted in their desire to change the election results in January,” CHS senior Rahul Rajamani said. “I’ve lived through a few presidential elections and I remembered it being a pretty benign democratic process and now it’s becoming some political spectacle.”

The protesters were cleared out of the Capitol building at 6 p.m., after delaying the electoral certification for six hours. The House and Senate reconvened after they were able to reenter, and at 3:32 a.m., 15 hours after the proceedings had begun, the votes were certified.

House Democrats have called a vote to impeach Trump, who they accuse of inspiring the violence at the Capitol, on Wednesday for the second time in his term as president.

“Historically speaking, very few states allow that sort of thing to happen, especially at symbols of the political state, without serious reprisal,” CHS world history and comparative government teacher Shawn Hudson said. “A concept we talk about a lot in comparative government is this idea of legitimacy: that all governments rely on the people believing in their ability to use state power. What does it do for the legitimacy of our government that these people had our Congress at gunpoint?”

Many companies, including Twitter, cut ties with Trump and other Republicans who have supported the protests.

“I think that one of the more interesting choices was to ban him from Twitter,” Rajamani said. “I think that that was a good decision. I think that’s kind of controversial because a lot of free speech absolutist have issues with it, but he’s inciting violence using a massive platform on a level that’s never been seen in modern history.”

Ongoing investigations have produced several arrests of protesters who were at the Capitol building. The FBI has also issued warnings of potentially imminent protests all over the country, and the National Guard plans to increase their presence at the Jan. 20 inauguration of Biden and Vice President-elect Kamala Harris.