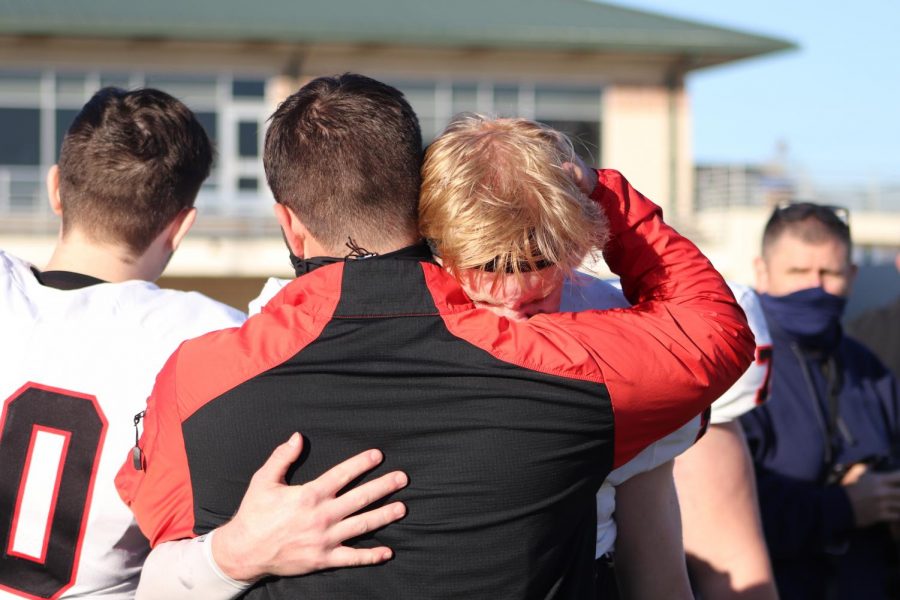 DENTON- The stage was set. Denton Guyer dressed in its grey and black with a roaring blue student section against the white of the visiting Cowboys on a cool, breezy afternoon.

Guyer did what it does best -jump to an early lead- picking off Coppell senior quarterback Ryan Walker and hammering the Cowboys with three touchdowns in the first quarter alone.

Despite Coppell getting back into the game by halftime, it was not enough as Guyer ended the Cowboys’ season with a 52-24 victory at C.H. Collins Athletic Complex on Saturday in the Class 6A Division II Region I bi-district playoffs. The Cowboys end the season 6-4.

Liggins marked his return to C.H. Collins Athletic Complex with a touchdown to help the Cowboys rally but ultimately got double teamed and phased out of the game later on.

“It felt good playing against some old teammates, out there chirping a little bit but it felt pretty good,” Liggins said. “I was pretty excited [when I found out that we would play Guyer], I was going hard all week in practice because it’s the playoffs, you never know what could happen, it could be your last game.”

Entering the second half, Coppell only trailed Guyer by one touchdown and a 83-yard run from Walker on a scramble set up the game tying touchdown rush from Ngwu with 10:03 remaining in the third quarter.

“We got stuck towards our own end zone [because] we didn’t get a great kick return and I actually saw the wrong play so I just tried to make something happen with my feet because I just didn’t see it right,” Walker said. “I just made a move, saw a lane and took off. As soon as I got down there, everyone was hyped up, we were ready to go score and we punched it in.”

The Cowboys had done the seemingly unthinkable, rallying from a 21-point deficit to Guyer (8-2) to a 24-24 tie and potentially setting up a classic Texas high school football matchup.

“It says a lot about our kids and their effort; they played with a lot of heart,” Coppell coach Michael DeWitt said. “The fact that we were able to make some plays and kept playing hard, getting back in it gave us a chance and that is all that you can ask for.”

Responding to Ngwu’s touchdown was Guyer junior running back Byron Phillips with a seven-yard touchdown rush of his own.  It was now Guyer’s time to shine and show why it is in contention for a state title following a state finalist finish last year.

Coppell set down an offensive drive of its own to once again tie the game but Guyer junior free safety Marquan Pope made the single most important play of the day, picking off Walker once again but, this time, returning it for 83 yards to give Guyer the 38-24 lead with 5:52 remaining in the third quarter.

The Cowboys did have a chance to score in quick succession after Pope’s pick six, lining up in a fourth and two but Walker’s pass sailed over Liggins’ head and into the back of the endzone, killing the drive and ultimately the game.

“Somebody got through, I tried to rush my throw, made a bad decision, it was my fault and they returned it and that crushed our spirits a little bit,” Walker said. “We got down to the goal line on the next drive and we couldn’t punch it in. I fumbled the snap and again, that was my fault and I have to take the blame for both of those [because] it could’ve been the difference maker.”

Guyer rode this new wave of energy and physically dominated Coppell for the rest of the game, scoring 28 unanswered points to eliminate Coppell from the playoffs. When it was all said and done, Guyer came out of the game with 400 rushing yards and seven total touchdowns, led by Phillips’ 209 yards and three touchdowns.

“They just wore us down, they are big and physical on both sides of the ball and they wore us out [of the game],” DeWitt said. “They are a better football team than us, they have some really good players and we had a hard time slowing their pass-rush down, especially when they knew that we were going to throw the ball but Ryan battled – all our kids did – and I’m really proud of them.”